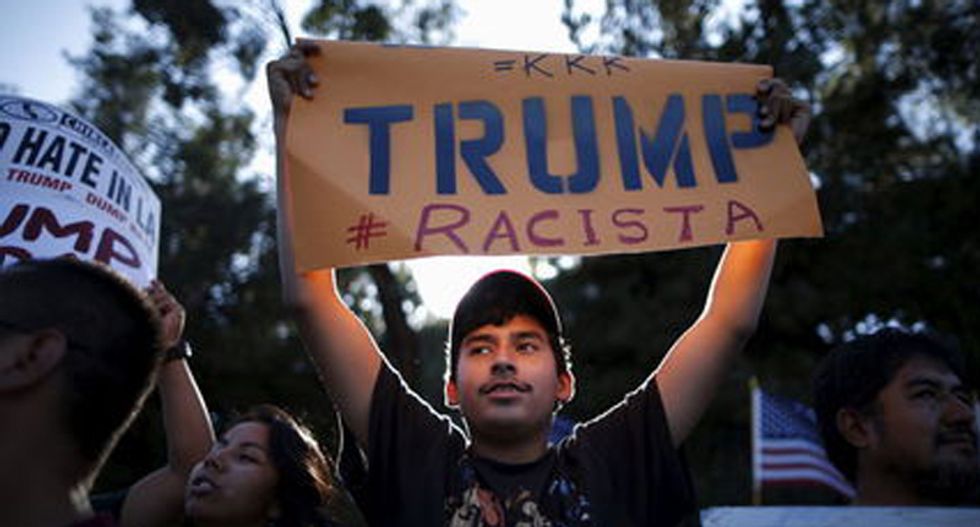 On Friday night, the insurgent Republican candidate spoke to an audience drawn from conservative Hollywood while Latino protesters raged outside

Donald Trump has built a presidential campaign around insulting Mexicans, so it was an ambitious play to come to Los Angeles, the city with the world’s biggest Mexican diaspora, seeking support.

The Republican candidate swept into Hollywood on Friday to court politically conservative filmmakers who gathered to cheer, hoot defiance and collaborate, at least for one sultry night, in the grand illusion known as President Trump.

Trailing outrage over his broadsides against immigrants , Trump played the role of rebel hero while the audience of actors, directors, producers and technicians in the Luxe Sunset Boulevard hotel put tinsel on the fantasy that their guest could win the Republican nomination and go on to claim the White House in 2016.

A scrum of media and piñata-bashing protestors outside the venue completed the sense of circus around a radioactive presidential campaign which crackles between loopy and canny, surreal and deadly serious.

Flanked by relatives of people allegedly killed by undocumented immigrants in crimes and accidents, he then lamented foreigner mayhem.

“People came into the country illegally and killed their children,” he said.

Brenda Sparks, who blamed her son’s death in a traffic collision on an immigrant, said the tycoon had the guts to say what millions thought: “My taxpayer dollars are paying for all these illegals and their children. I’ve lost my child, how much more do I have to give?”

The event was a riposte to progressives and latinos who have branded Trump a racist demagogue and to fellow Republicans who have begged him to cool it.

Trump’s host in Hollywood was the Friends of Abe , a semi-clandestine group of right-wing filmmakers which includes Clint Eastwood and Jon Voight.

Having spent a decade in the shadows, banning photography and tweeting at events, the group was nervous about being caught in the spotlight – a possible first for Tinseltown.

“We are the only group in Hollywood that genuinely does not look for publicity,” its head, Jeremy Boreing, told the Guardian. “We hope that it’s a phenomenon that we endure and move on.”

Dozens of protestors with the Coalition for Humane Immigrant Rights of Los Angeles picketed outside, brandishing “Dump Donald Trump” placards and chanting in English and Spanish. A smaller group of pro-Trump supporters, some wearing red, white and blue, responded with its own chants and “Trump Tells the Truth” placards, Police kept them apart.

By Saturday Trump had moved on to Phoenix, Arizona, where he was expected to give another immigrant-bashing speech and another spin to the news cycle.

But LA was still digesting his visit. Just last week the United States Census Bureau confirmed that latinos have edged past white people to become the biggest racial or ethnic group in California, a milestone underscoring a wider latino demographic surge across the US.

Latinos are expected to grow from 17.4% of the US population to 30% by 2060, producing a burgeoning ethnic voting bloc which already helped clinch Barack Obama’s victories in 2008 and 2012.

A separate report found that the US is now the world’s second-largest Spanish-speaking country after Mexico, with Spanish on course to be the mother tongue of almost a third of US citizens.

With the largest Hispanic population of any county (4.9 million) Los Angeles is America’s de facto latino capital. Why Trump chose to bring his toxic message about Mexican immigrants here reveals some strange dynamics of presidential campaigns.

When the real estate developer-turned reality television host launched his candidacy three weeks ago, this is what he said: “When Mexico sends its people, they’re not sending their best. They’re sending people that have lots of problems. And they’re bringing those problems with us. They’re bringing drugs, they’re bringing crime. They’re rapists.”

Even for a nation accustomed to provocative Trumpisms this was too much. With #dumptrump trending on Twitter business partners including NBC Universal, Univision, ESPN, Macy’s, PGA, Nascar and restaurant chefs severed ties. Trump’s mainstream Republican rivals, after some hesitation, denounced the comments.

The backlash’s intensity startled the former Apprentice star, who conceded the lost business amounted to “a lot of money”. But he steamed ahead with fresh tirades, blaming Mexicans for “tremendous infectious disease... pouring across the border”.

Critics scorned him as a racist buffoon but the strategy propelled him past many GOP rivals in opinion polls.

The reason was on display in ebullient Facebook posts by Friends of Abe members, said David Stein, a former member who retains ties to some members : “Everyone is rallying behind him. He’s tapped into the angry white male element. They’re on fire. I see people pushing fairly offensive stuff. It’s about dropping the veneer, calling immigrants what they (supposedly) are.”

Boreing, the head of the group (which is named after Abraham Lincoln), said the invitation to join Trump “for dinner and insightful discussion” did not signify endorsement. It was an opportunity for members to hear “unfiltered” views and make up their own minds.

Stein compared passion for the tycoon to fleeting puppy love.

“They think they’ve found their dream candidate,” he said. “It’s like schoolgirls who see the jock score a great touchdown but when they go out on a few dates they lose interest.”

Pitney, the analyst, agreed: “It’s about expressing emotion. Trump provides an outlet for that. But he won’t be the nominee.”

Too wacky, too unpredictable, too ideologically inconsistent, he will likely burn out like previous GOP insurgent candidates such as Michele Bachmann and Herman Cain, goes the pundit consensus.

Republican leaders, however, fear serious damage : that Trump will make the party brand completely toxic to latinos; that angry white males will revolt at any attempt to marginalise Trump; or, the doomsday scenario, that Trump will break away to run on a third-party ballot and split the conservative vote, just as Ross Perot fatally weakened George HW Bush against Bill Clinton in 1992.

The man inspires such passions it is unlikely the protestors outside Luxe Sunset Boulevard hotel, or the cheering crowd within, considered the possibility of Donald Trump handing victory to Hillary Clinton. Maybe they should. It’s a twist worthy of Hollywood.