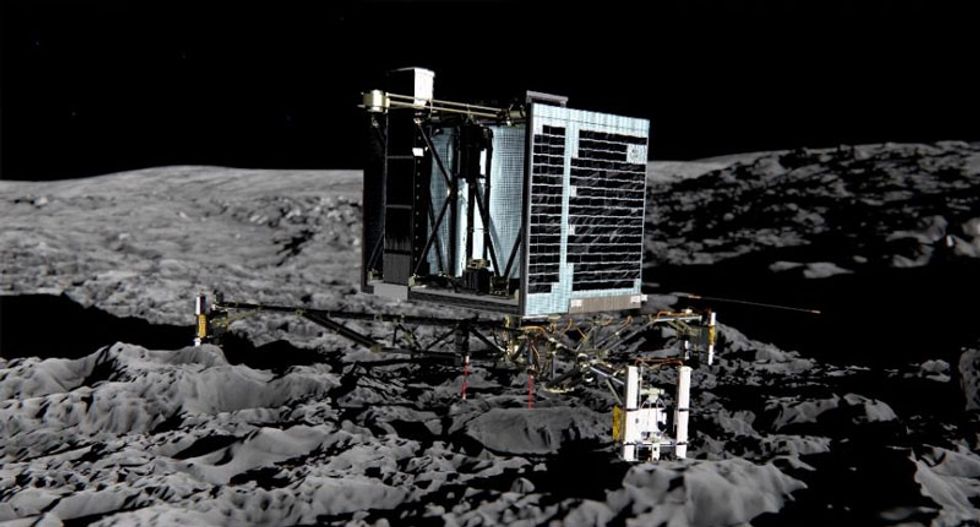 Europe's comet-riding robot lab Philae has fallen "silent", said ground controllers Monday who feared it may have shifted on the rough, alien surface, out of radio range.

The latest data suggested the probe, perched on a comet streaking towards the Sun, may no longer be in line of contact with its orbiting mothership, Rosetta, which relays its messages to Earth, they said.

"In the telemetry received, we have observed signs that Philae could have moved and that its antennas are thus perhaps more concealed or their orientation might have changed," said project leader Stephan Ulamec of the German Aerospace Center (DLR).

The washing machine-sized lander may have been dislodged by the gas and dust blasting from Comet 67P/Churyumov-Gerasimenko as it draws ever closer to the Sun.

The data also indicated one of Philae's two transmission units appeared not to be working properly, and a receiver was damaged, said a statement from the European Space Agency (ESA) which described the lander's status as "uncertain".

"At the moment we have some concerns about this," DLR spokeswoman Manuela Braun told AFP. "We are trying to understand."

Philae, which touched down on 67P on November 12 last year, went into hibernation three days later, and woke up again on June 13 for intermittent communications with Earth.

It has since called home eight times, the last on July 9 when critical data was uploaded from Philae's prodding and probing of its alien home.

But since then, the robot probe has gone "back to 'silent mode'," said the DLR statement.

Efforts are being made to contact Philae, possibly by adjusting Rosetta's orbit to try and find a better connection.

But moving the lander itself is not an option for now.

"At the moment, we don't move it, because we don't want to irritate it," said Braun. "We want to understand the situation before changing anything which might result in a worse situation."

There has been an added complication: Rosetta has had to be moved into a further orbit as its star-reading navigation system was being confused by the dust particles streaming out of the comet.

Philae touched down on November 12 last year after a 10-year journey piggybacking on Rosetta.

The landing was bumpy -- the tiny lab bounced several times on the craggy surface before ending up near a crater rim on uneven terrain, deprived of sunlight to replenish its battery.

Philae had enough onboard power to send home data from about 60 hours of tests conducted with eight of its 10 instruments, before going into standby mode on November 15.

But the lander's power pack is being recharged as 67P zips toward the Sun at nearly 34 kilometres (21 miles) per second.

Scientists had hoped for another opportunity to switch on Philae's instruments, including a drill for collecting a sub-surface sample.

Comets are frozen balls of dust, ice and gas left over from the Solar System's formation some 4.6 billion years ago. Some experts believe they smashed into our infant planet, providing it with precious water and the chemical building blocks for life.

ESA and the DLR stressed they have "not given up" on Philae.

"There have been several times when we feared that the lander would not switch back on, but it has repeatedly taught us otherwise," said Ulamec.