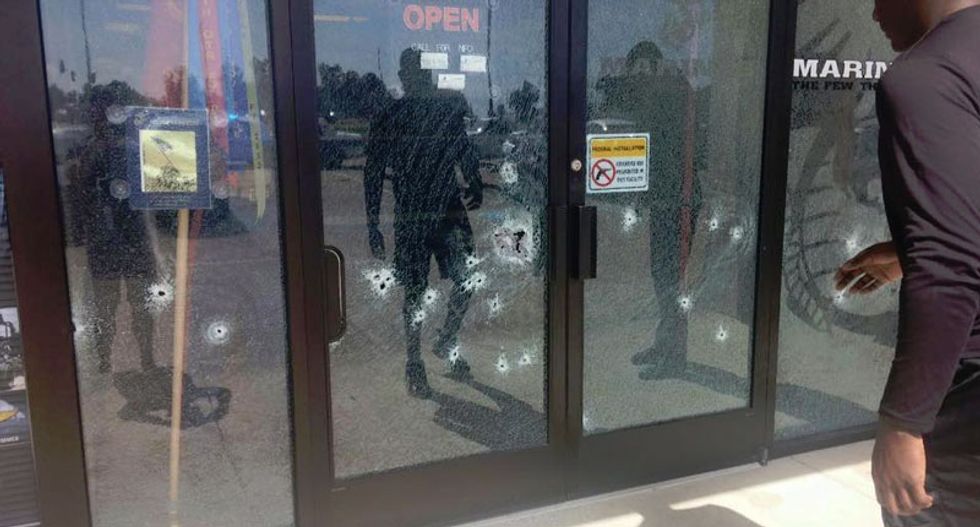 Five people were killed on Thursday including a suspected gunman who opened fire at two military-related facilities in Chattanooga, Tennessee in an attack local officials described as an act of domestic terrorism.

The other four killed were Marines at a Naval Reserve Center, a military official said in Washington, DC. The suspected shooter, who has not been identified, is believed to have lived in the area, local police said.

"We are treating this as an act of domestic terrorism," said Bill Killian, the U.S. Attorney for the Eastern District of Tennessee, adding that no official determination of the nature of the crime had yet been made.

Three others were wounded in the attacks that began at about 10:45 a.m. local time and ended about 30 minutes later.

A White House spokesman said President Barack Obama had been told about the shooting.

"The President has been briefed by his national security staff on the Chattanooga shooting, and will continue to get updates as warranted," said spokesman Eric Schultz.

Lockdowns had been put in place at businesses, a college and other facilities near the shooting sites.

A witness at a glass company near the Navy center said the shooting there starting at about 11 a.m. (1500 GMT).

Near the recruiting center, a witness said the gunman appeared to be calm.

"Everybody was at a standstill and as soon as he pulled away everyone scrabbled trying to make sure everyone was OK," said Erica Wright, who works two doors down from the recruiting center.

The city along the Tennessee River is in the southeastern section of the state just north of the Georgia border. Just over 173,000 people live there, according to a 2013 estimate from the U.S. Census Bureau.

Watch live coverage via WRCBtv, below:

UPDATE (5:48 p.m. EDT): President Barack Obama issued a statement addressing the attack, calling it "heartbreaking" and urging calm until all the details are known.

USA Today said, "The president said he wanted to extend 'the deepest sympathies of the American people' to the four Marines and their families, and asked all Americans to pray for them."

The shooter has been conclusively identified as 24-year-old Muhammad Youssef Abdulazeez, who was arrested for driving under the influence in April of this year.

UPDATE (6:41 p.m.): Reuters reported that U.S. Attorney General Loretta Lynch is requesting that the FBI conduct a national security investigation regarding the attack.

"The U.S. Attorney’s office and department prosecutors are also actively involved," Lynch said in a statement. "In the days ahead, we intend to work with our partners in law enforcement and the intelligence community to ensure that the American people are protected and that justice is served.”

UPDATE (8:29 p.m.): CNN released a photo of a woman being led away from Abdulazeez' home in handcuffs.

CNN also reported that Democratic presidential candidate Hillary Clinton released a statement that said, in part, ""I just want to say a word about how tragic and regrettable it is that we lost four Marines in an act of senseless violence -- what is being called another instance of domestic terrorism. It's terrible when we lose Marines anywhere in the world, but to lose four in Chattanooga, Tennessee, is just heartbreaking."

She continued, ""Obviously, my heart goes out to their families and to their colleagues, and I hope that we can find a way to stop this kind of violence that is stalking our children, people in Bible study and people who wear the uniform of our country."

What would the American republic look like if, one day, the fascists just disappeared? What could we accomplish if the people most hostile to bargaining were not stabbing democracy in the back?

Beautiful photos of Stanton Hall have decorated hundreds of brochures and websites over the past 90 years.

Stanton also has a small role in Black history.