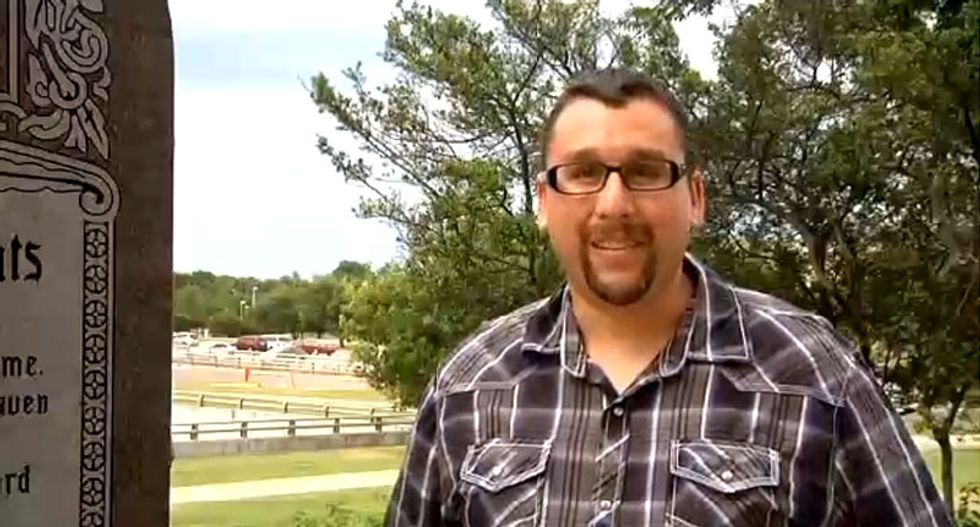 An Oklahoma man has started an online petition he hopes will prevent the Ten Commandments monument from being removed from the state Capitol.

The Oklahoma Supreme Court ruled this week that the 6-foot-tall stone monument violated the state's constitution, which prohibits the use public money or property to benefit religion.

Eric Brinsley, a former U.S. Air Force chaplain’s assistant, launched a petition to keep the monument at the state Capitol, KOCO.com reports. The petition states: "This is a Christian Nation and Our elected officals have failed to represent us and its up to us to work together to keep the 10 Comandment Monument at the capitol and Stand With Jesus against oppresion of OUR Nations Religious Belief as evident in the currency we use every day and set the example for the rest of the country [sic]."

Brinsley shared the petition on social media on Tuesday. By Friday, it already had almost 13,000 signatures.

"I went to sleep I woke up the next morning it was pretty much going viral by then,” Brinsley told Fox 25.

"We're like a Christian nation. I understand the separation of church and state. But that was really to keep the church from telling the state what to do," he added.

The online effort, however, is unlikely to save the monument regardless of the number of signatures it acquires. The state does not recognize online petitions. They must be signed in person.

“As far as our office is concerned, we only file statewide petitions for initiatives and referendums, something that changes statute or a constitutional amendment,” Amy Canton with the Secretary of State’s Office explained to Enid News.

Watch video, courtesy of Fox 25, below: