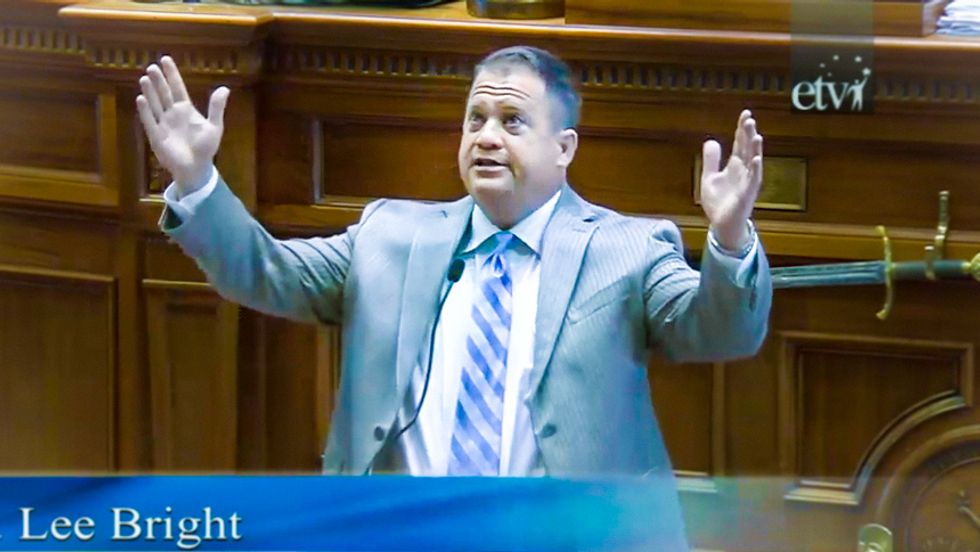 South Carolina state Sen. Lee Bright (R) began debate about removing the Confederate flag from the statehouse grounds on Monday with a passionate plea for lawmakers to focus on same-sex marriage instead.

As the senators prepared to debate a measure that would remove the flag, Bright took to the floor to point out that President Barack Obama sang "Amazing Grace" at the funeral for nine black church members in Charleston and then later that night the White House was illuminated in rainbow colors to celebrate a Supreme Court decision that legalized same-sex marriage.

"I watch the White House be lit up in the abomination colors!" Bright said. "It is time for the church to rise up.... Romans chapter 1 is clear, the Bible is clear. This nation was founded on Judeo-Christian principles and they are under assault by men in black robes who were not elected by you."

Bright argued that lawmakers should be protecting county clerks from the "tyranny" of having to issue marriage licenses to gay and lesbian couples instead of debating the Confederate flag.

The senator choked up as he continued: "We can rally together and talk about a flag all we want but the devil is taking control of this land and we're not stopping him!"

Bright suggested that the state of South Carolina might have to stop issuing marriage licenses altogether.

"Now, I believe that the Christ teaches us to love the homosexual, but he also teaches us to stand in the gap against sin," he opined. "And we need to make our stand. I know how people of all colors feel about this."

Watch the video below from the South Carolina Senate, broadcast July 6, 2015.