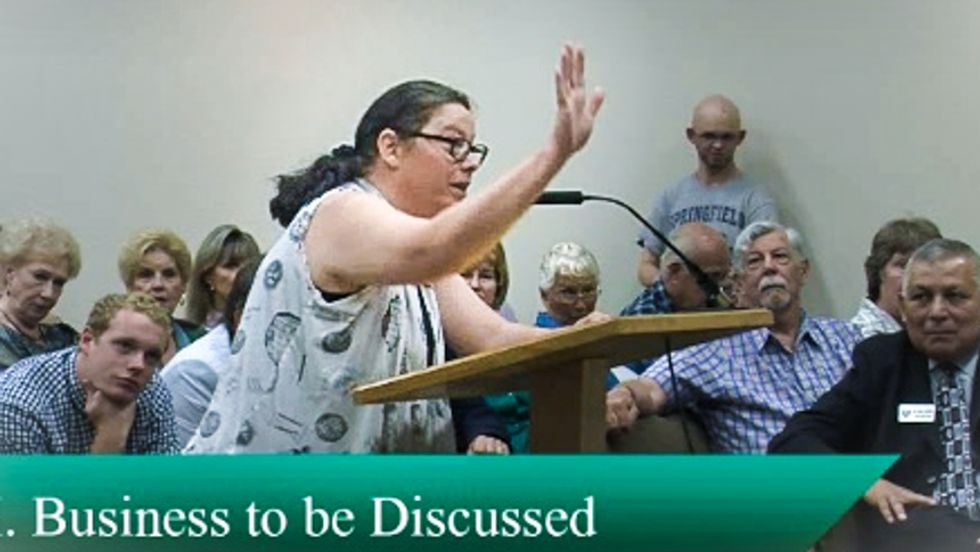 Religious conservatives descended on the Hood County Commissioners meeting in Texas on Tuesday demanding that LGBT books be censored or banned from the local public library, but ultimately lost out to those who argued for freedom of speech and tolerance.

After a local Tea Party chapter began circulating requests to have two LGBT-themed books -- This Day in June and My Princess Boy -- removed from the Hood County library Children's section, residents swarmed the Commissioners' court to speak out on the issue.

Many opponents said that their objections were based on their Christian faith.

One woman explained that the government employees and President Barack Obama had lost their "fear of the Lord."

"The Founding Fathers designed our Constitution from Bible principles as Moses was instructed to bring the law down to the people... So, America was founded on God," she insisted, imploring the commissioners to compare the United States to the cities of Sodom and Gomorrah.

Another common theme among Hood County residents was the notion that LGBT books were an effort to "indoctrinate our children."

"That is their main goal," one man said. "These books are not the problem. Sin is. I ask you to not celebrate sin, to justify it or rationalize it. Place these books in the dustbin of history with all the other books that help to destroy our society."

One of the last women to speak warned the commissioners that judgement day was coming.

"The slippery slope is now and we all will face decisions," she argued. "When our Lord Almighty comes, it will all be played back. Make a difference, for you will be held accountable. And this is important."

"This is not a topic that our God would be happy with," the woman noted, turning to the audience. "There is no fruit that comes from a man and a man and a woman and a woman. And if there is, it is not of God!"

But residents supporting inclusiveness at the library also showed up to tell their very personal stories.

One man noted that he had grown up in Texas and wished that his local library had offered books to help him make sense of why he was different than the other children.

"We were unusual kids and our parents let us fly our freak flags," he said. "And I would have loved books about weirdoes like me for those days when, you know, the teasing didn't stop."

A mother who had lived in Hood County her entire life pointed out that one of her two sons was "gay as the day is long."

"And he was my princess boy," she said proudly. "Sitting up in here it's been an interesting situation, often times it sounds like a tent revival. And we're in Commissioners Court, not church."

She concluded with some advice for parents: "When your child at four years old picks up a book that they probably couldn't read and says, 'Mama, I don't understand this.' Let me tell you how I answer that. 'Well, honey, some of us live differently than others.' And then we move on."

The final speaker was a new mother who said that she wanted to bring her children up in an inclusive and tolerant community.

"I believe in equality for all, no matter your gender or your sexual orientation, and I will teach my daughter those things," she said, choking up. "I'm glad a speaker earlier brought up some teachings in the Bible. Because while the Bible does teach forgiveness and grace, it is also full of very adult material that I will handle with my daughter very carefully."

In the end, commissioners decided to leave the LGBT-themed books in the children's section of the library.

Watch clips of the meeting below from Granbury Television.

Watch the all of the testimony in the following video.

Fox News and Fox Business, both created by Rupert Murdoch, have never been shy about promoting extreme or ludicrous ideas in the hope of driving ratings. But what far-right opinion hosts like Tucker Carlson, Laura Ingraham and Sean Hannity claim and what Fox News executives actually believe can be two different things, and an article published by Vice on September 23 stresses that Murdoch's actions show that he takes climate change seriously.

It's important to pay close attention to what Fox News does as well as what it says. Fox News has been full of anti-vaxxer hysteria; yet more than 90% of Fox Corporation employees, according to The Guardian, have been vaccinated for COVID-19. Fox Corporation, CNN reports, has "quietly implemented the concept of a vaccine passport."

Donald Trump blasted Sens. Lindsey Graham, R-S.C., and Mike Lee, R-Utah, on Wednesday, telling the Republican lawmakers they should be "ashamed" of not showing him enough fealty during his ceaseless campaign to overturn President Biden's 2020 election win.

"I spent virtually no time with Senators Mike Lee of Utah, or Lindsey Graham of South Carolina, talking about the 2020 Presidential Election Scam or, as it is viewed by many, the 'Crime of the Century,'" Trump wrote in an email blast. "Lindsey and Mike should be ashamed of themselves for not putting up the fight necessary to win," the former president continued.