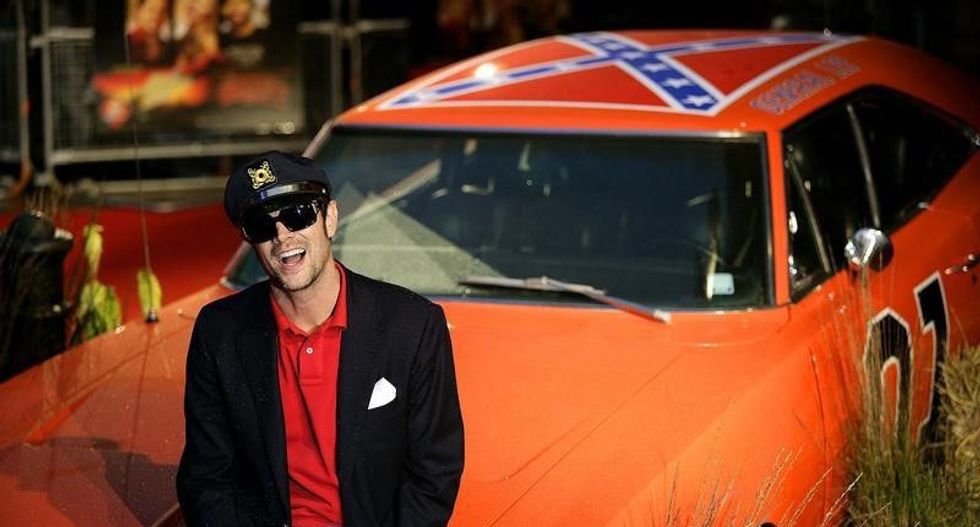 Actor Johnny Knoxville of the U.S. sits on the "General Lee" car at the film premiere of "The Dukes of Hazzard" at the Vue Cinema, Leicester Square, London August 22, 2005. REUTERS/Dylan Martinez

TV Land has pulled re-runs of the 1980s sitcom "Dukes of Hazzard," the U.S. cable network said on Wednesday amid controversy over portrayals of the Confederate flag, which is notably featured on the show's "General Lee" vehicle.

Viacom Inc-owned TV Land declined to comment on why it has pulled the re-runs, but there has been growing criticism of displays of the Civil War-era flag in the wake of the shooting of nine black churchgoers in South Carolina last month.

The man arrested in the shooting, Dylann Roof, is a 21-year-old white man who had posed with a Confederate battle flag in photos posted on a website that displayed a racist manifesto attributed to him.

"Dukes of Hazzard" ran from 1979 to 1985 and centered on the fictional Duke family, who lived in rural Georgia. An orange car bearing a Confederate flag design of the roof and nicknamed "General Lee" was regularly featured in the show.

Fans of the program took to social media to express frustration with TV Land's decision. A Change.org petition to bring the show back had more than 1,800 supporters as of Wednesday morning.