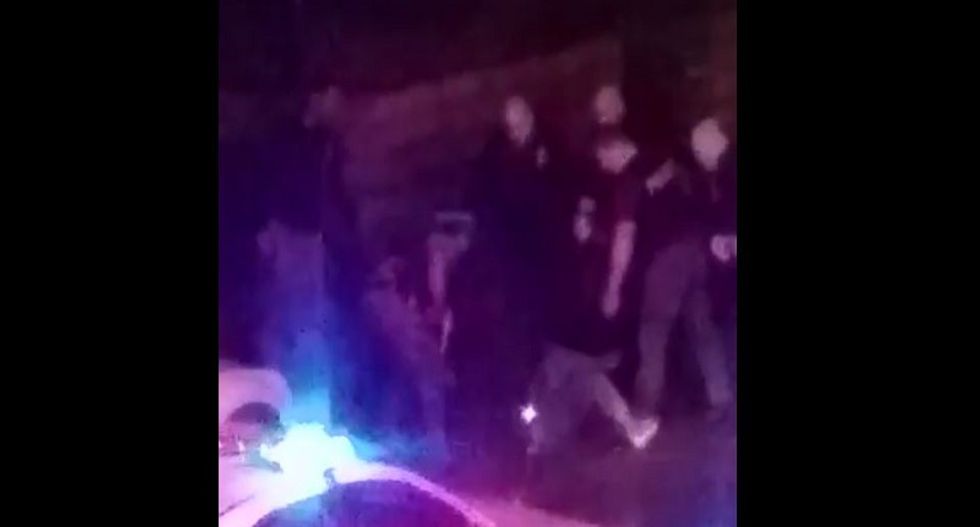 A video posted to YouTube on Wednesday shows a massive and violent police response to one black man, who is seen on the ground as he is punched, kicked, Tased, and cursed at by police officers.

The video, posted by Los Angeles blogger and journalist Jasmyne Cannick, reportedly documents the arrest of Tyree Carroll, a 22-year-old Philadelphian who the camerawoman and witness says was stopped while riding his bike.

It starts with the man being held down by four cops. He is struggling or writhing, screaming and calling out for his grandmother. A bicycle can be seen a few feet away. A cop punches him repeatedly. Then another police car pulls up and an officer gets out yelling, "I have a f*cking Taser, here I come! You're getting the f*cking Taser!"

An officer can then be heard saying, "Tase that motherf*cker."

Multiple officers can then be seen pummeling the man with fists, another screams, "you f*cking bit me you piece of sh*t!"

The woman holding the camera says to a companion that the man was Tased four of five times. By the end of the video, at least two dozen officers are on scene. The camerawoman counted 11 police cars and 26 officers - most of whom appeared to be white.

"Four cops had him, he wasn't going no where," the videographer says to her companion. "Thank God he lived -- right now."

According to Cannick, the incident occurred April 3 at 7:30 p.m. He was arrested on charges of assault, recklessly endangering another person, resisting arrest, and several drug charges.

Philadelphia court records show Carroll was arrested April 4 by Philadelphia police and is still in custody, scheduled for arraignment on July 21. The court document shows bail set at only $5,000 with Carroll facing drug-related charges. Cannick reports he can't be freed on bail due to a previous parole violation, and that his family is working to free him and get charges dropped.

Video of the arrest is below: