WATCH: Arizona cops illegally barge into home of showering woman and handcuff her while she's naked 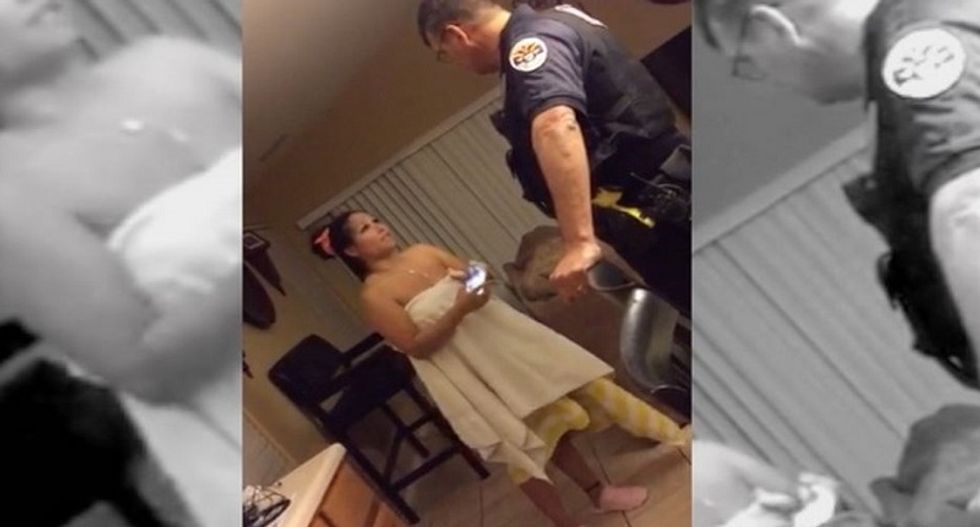 A woman is suing after an Arizona police officer barged into her home in March, handcuffed her and lectured her while she was naked.

Elmerelda Rossi was showering when two Chandler police officers arrived at her home to investigate a domestic disturbance call because Rossi had an argument with her estranged husband, ABC 15 reports.

Rossi told ABC 15 she was in the shower when her daughter told her the officers were at the door. She grabbed a towel and slung it around herself before answering. She told the officers to wait at the door so she could get a cell phone to record the encounter, and closed it behind her.

"I start to walk into my living room, I probably get maybe five steps in, and all of the sudden I just hear boots running in after me, telling me, 'stop or I'll arrest you,'" she told the station.

Chandler police Officer Doug Rose threatens to arrest her. When she asks what for, he grabs her arms and cuffs her, and the towel falls off, exposing her.

"I don't want to touch you, don't touch me. I didn't want to touch him," she sobs, and her daughter can be heard breaking down as things become chaotic. Rose's partner, Officer David Selvidge, stands silently and watches with his arms folded.

"You have absolutely no clothes on?" Rose asks Rossi.

"She was in the f*cking shower, what is wrong with you?" the daughter screams.

Selvidge tells the daughter to get her mother some clothes as Rose handcuffs her.

After the incident, Selvidge complained to his superiors about Rose's conduct, prompting an internal investigation. The investigation found Rose entered Rossi's home illegally. He also failed to document key aspects of the call, including arresting then un-arresting Rossi and the fact she was naked, according to the New York Daily News. Footage from his body camera was missing.

He hasn't been disciplined or charged with a crime, ABC 15 reports.

Rose retired in the midst of the investigation, but Rossi, who was never charged with a crime, has filed a lawsuit.

Rossi told ABC 15 she was molested as a small child and her encounter with Rose, caused her to have a flashback.

"This was disgusting, this was barbaric, and this was very degrading," Rossi's attorney, Marc Victor, told the station.

During the incident, Rossi's daughter drops her cell phone, but it continues to record. The sounds of women screaming and sobbing can be heard. Rose continues to hold Rossi hostage, lecturing her that police officers have ultimate authority to do whatever they want.

"Don't take the attitude with cops, because we don't play," he says as she sobs. "When a cop shows up, you're not the one in charge. I don't care if this is your house. You understand me?"

Rossi said Rose made her daughter take her handcuffs off.

Watch the report from ABC 15, which includes video of the incident, here: