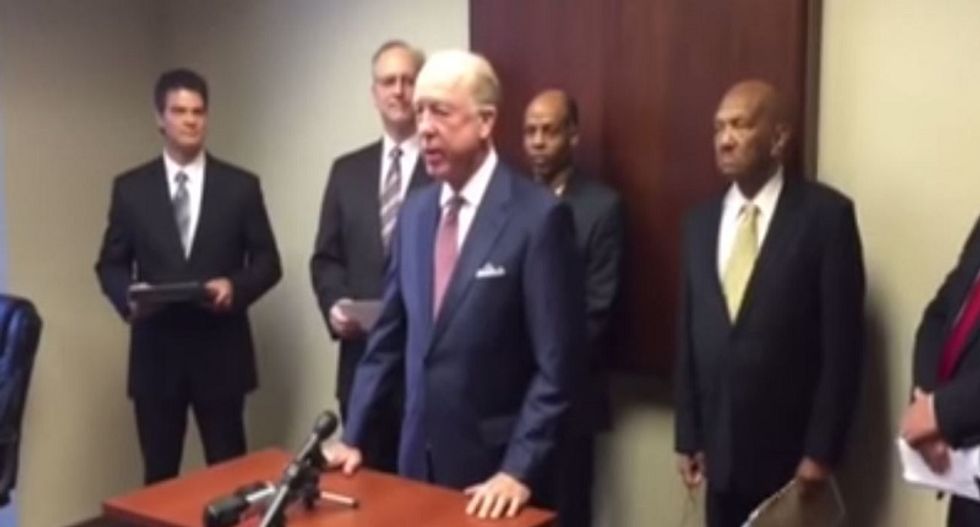 A new group dedicated to fighting the Supreme Court's marriage equality ruling promised at a Tuesday press conference to win the "hearts and minds" of Americans.

The group, which calls itself REAL MARRIAGE: One Man/One Woman for Life and has among its ranks conservative religious leaders, a doctor of questionable ethics and an "ex-gay" conversion activist, went public Tuesday in a dour Dallas press conference, the Texas Observer reports.

It will be "mandated" learning for children in schools beginning in kindergarten, Hotze warned.

The group has vowed to target businesses and politicians that support LGBT rights. But they didn't have any specifics, the Texas Observer reports.

Their website promises a "major announcement" of conference dates and an action plan coming September 1, but is otherwise mostly empty of content.

The press conference Tuesday was held at the office of David Pickup, a self-identified "ex-homosexual" who now works as a "gay conversion therapist."

"America, it’s time for psychotherapy, and the Real Marriage movement with the guidance from the omniscient creator will lead this nation back to a secure identity from the brink of self-destruction," Pickup told reporters. He believes the group will change the "hearts and minds" of Americans.

The group is planning a "World Conference on Gender, Sexuality and Marriage" in Dallas.

Rev. Bill Owens, president of the Coalition of African-American Pastors, compared marriage equality to the 1857 Dred Scott ruling, which upheld slavery and denied citizenship to blacks.

"These justices have got it wrong, like they did in the Dred Scott case," Owens told reporters. "I'm disgusted that so many people have stood back and let three percent of the population turn this country upside down."

Owens' group is affiliated with the anti-gay National Organization for Marriage. It's been criticized by black religious leaders as being divisive. Owens endorsed Mike Huckabee's presidential bid in 2008. Hotze, who sells a "natural" approach to treating thyroid disease at his Texas clinic, has been criticized by board-certified endocrinologists for selling "snake oil" to patients, according to the Houston Press.