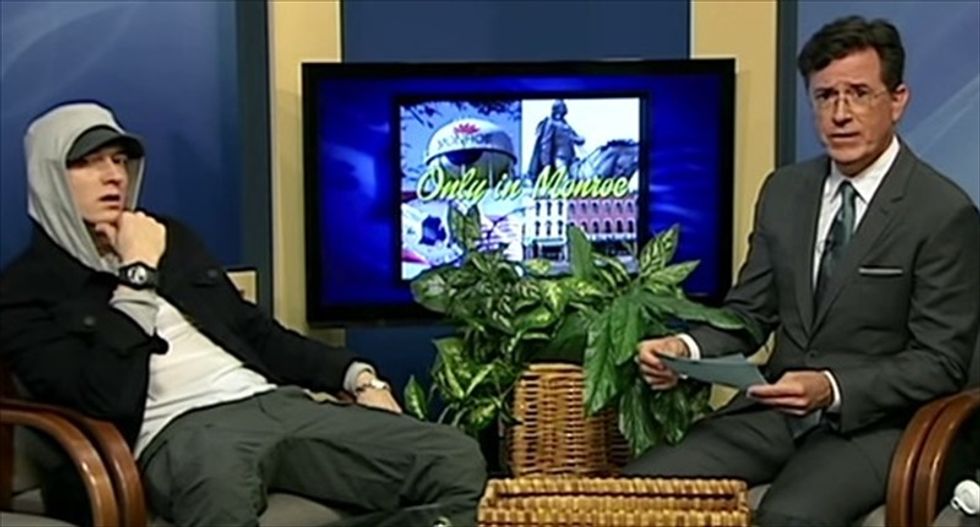 Stephen Colbert interviews Eminem on 'Only In Monroe.' [YouTube]

Colbert filled in for an episode of Only In Monroe, which airs on the town's local-access channel, with the highlight being Colbert interviewing rapper Eminem, then stumping him on Bob Seger songs.

"You claim that you're from Michigan, and you don't know any of these songs," Colbert quipped.

During the show, Colbert also hosted a faux-news segment, including a note about the local boat club serving muskrat -- a "local delicacy" -- at its annual dinner.

"If you wonder what muskrat tastes like, imagine eating a rat, but with more musk," he explained.

He also interviewed the program's regular hosts, Kaye Lani Rafko Wilson and Michelle Baumann, reprising his Colbert Report dash across the stage to meet them.

"Is it true you go to a movie theater not to see a movie, [but] just to buy the popcorn and take it home?" he asked.

"I do. My daughter works there and they make a really good popcorn," Rafko Wilson confirmed, adding that one can do that "only in Monroe."

"I would say so," Colbert replied. "If you tried that in New York, they would Taze you."

The Monroe News reported that Colbert and his crew also stopped by a local establishment, Lowery's Bar, much to the surprise of owner Donald Bozynski.

"I didn't believe it either," Bozynski said. “Nobody ends up in Monroe without something going on."

Watch the episode, as posted online on Wednesday, below.