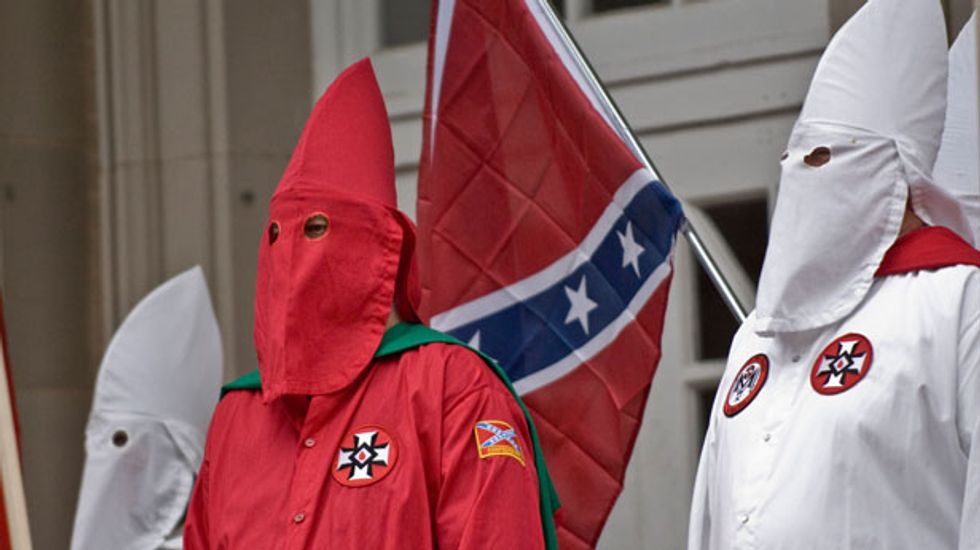 Social studies books for Texas public schools will minimize the importance of slavery in the Civil War and omit any mention of both Jim Crow laws and the Ku Klux Klan, the Washington Post reported.

Lessons covering the Civil War will list the reasons behind the conflict as being, "sectionalism, states' rights and slavery," in that order.

As Business Insider noted, the new textbooks come five years after the state board of education revised the curriculum. Republican board member Pat Hardy stated at the time that he considered slavery "a side issue" in the war.

The books are set to be issued to the state's 5 million public school students not long after the renewed debate regarding the Confederate flag, spurred by Dylann Roof's terrorist attack inside a South Carolina church last month that killed nine people, including state Sen. Clementa Pinckney.

"It's the obvious question, it seems to me," Texas Freedom Network spokesperson Dan Quinn told the Post. "Not only are we worried about the flags and statues and all that, but what the hell are kids learning?"

Neither Hardy nor board chair Donna Bahorich has commented on the new curriculum. Publisher McGraw-Hill addressed concerns over whether the materials downplaying slavery would be distributed outside Texas in a short statement, saying, "Content that is tailored to the educational standards of states."

Currently, students in Texas schools are required to read Jefferson Davis' inauguration speech when he became president of the Confederate States of America. But according to the Post, they are not required to read a speech by Davis' vice president, Alexander Stephens' "Cornerstone speech" of 1861, so named because he called slavery the "cornerstone" of the Confederate government, while stating, "the great truth that the negro is not equal to the white man."