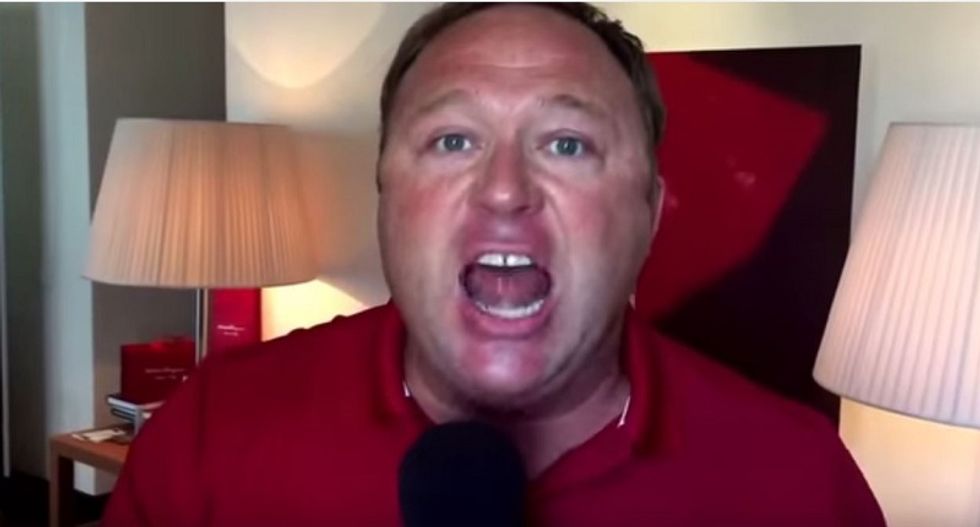 Conspiracy theory kingpin Alex Jones took a trip to Europe to "research" his theory that a villainous global cabal ruling Earth is using migrants fleeing war and death in their home countries to oppress the populations of wealthier, white Western countries.

Dubbed Operation Chaos, Jones said the global elites are using Western militaries to destabilize third-world countries, which then bankrupts developed nations when their inhabitants flee and live in Europe or the U.S. and get "goodies" like having babies for free.

"They're always selling it like the West somehow is sucking on the third world, it's the other way around," Jones said. "The people of the West are actually the ones footing the bill when you actually look at the numbers."

Operation Chaos, he said, is meant to bankrupt Europe, the United States, Canada and Australia, "and then we're all conquered."

"The New York Times admits 107,000 illegals they call refugees out of Africa and the Middle East in just the first 6 months of 2015 to one island: Lesbos, where the legend of the beautiful women comes from," he said, waving a copy of the International New York Times. "And the Lesbians are angry. And I don't mean two women together."

The refugees, he said, are "bitching and complaining, saying, 'I want welfare, I want my hotel.'"

Jones comments are troubling considering there is a human rights disaster in the Mediterranean sea in which more than 2,000 people have died trying to cross into Europe. Last year, a total 3,279 people died in transit, according to reporting by Al Jazeera. Migration is generally a deadly affair. Hundreds die in the American deserts every year trying to cross north from the U.S. Mexico border.

According to the New York Times, many of the refugees to Europe are fleeing horrifying circumstances in war-torn Syria and neighboring refugee camps. Once they reach Europe, they again suffer. Instead of being given "goodies" and housed in hotels, as Jones says, they are met with hostility and shuffled from place to place, often displaced again and again by authorities.

The crisis is ongoing.