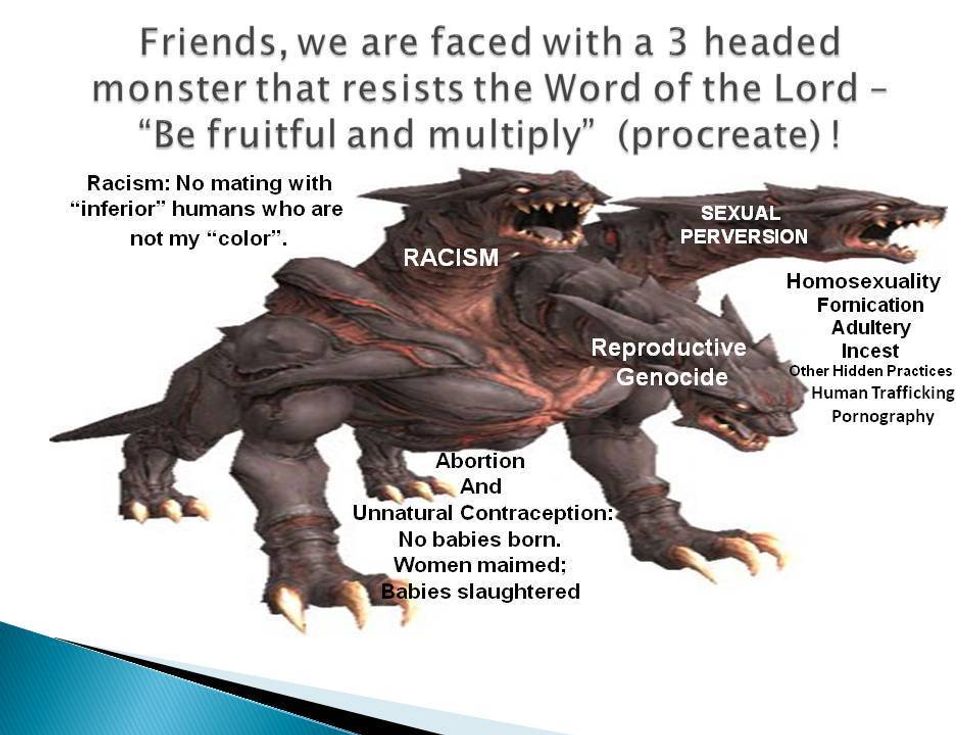 Make no mistake: The war on Planned Parenthood is about sex. I've said it over and over and I will continue to say it over and over, so long as anti-choicers continue lying, saying it's about "life" or "protecting women" or whatever bullshit they are trying to distract you with. As Miranda Blue at Right Wing Watch reports, the graphic you see above was released by Priests for Life, which is a major anti-choice organization, in their commentary for the latest Planned Parenthood hoax video. This piece, written by Fox News contributor Alveda King, is some standard unhinged right wing fare, complete with pretending to believe that the Satanic Temple is really about "devil-worshipping", instead of the cheeky atheist organization it actually is.

It is amusing to see the attempt to shoehorn "racism" in with what really bugs the anti-choicers, which is people having sex without their permission. And it's interesting that even then, racism is seen strictly through their sex obsession, as being about nothing but fears of interracial relationships. Now people who oppose interracial relationships are the worst, but they are also a small and shrinking minority. Far more pressing concerns are continuing disparities in economic and educational opportunity, police violence, and discrimination.

But I digress. It's clear that the real purpose here is to float this bizarre argument that non-procreative sex, in all sorts of forms, is a great evil destroying our country. And that's really what's going on here, which is why the  "answer" to the supposed problem of fetal tissue research is not, as you would expect, to ban fetal tissue research. No, it's to separate as many women as possible from contraception access. That's because this isn't and has never been about fetal tissue research, which is going to remain untouched by conservatives (who correctly believe they can benefit from it). It's about sex. It has always been about sex and no matter what bullshit they're on about today, it is always about sex.