'Are you f*cking joking?': BBC show about 'too much panic around rape' enrages viewers 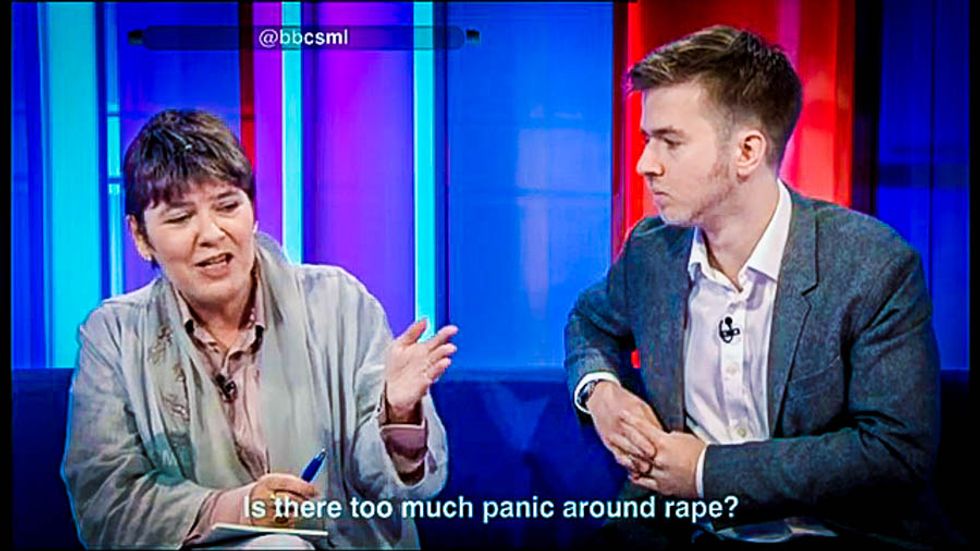 The BBC devoted part of its Sunday morning to debating the argument that there was "too much panic" about rape.

The BBC program Sunday Morning Live brought in Luke Gittos to discuss his book, Why Rape Culture is a Dangerous Myth.

According to Gittos, one reason that rape culture was a myth in the United States and Britain was because people believed that rape conviction rates were low.

"And I'm afraid in my work I've seen how these myths' impact on society's ability to deal with rape and sexual violence," he opined. "Because women are put off from coming to court even though they may have a strong case. And they're put off from engaging in the process because they believe certain facts which are demonstrably untrue."

Sociologist Julia Long reminded Gittos that only 10 to 15 percent of rapes were reported, but he countered that activists were "treating rape as a numbers game."

Libertarian BBC panelist Claire Fox praised Gittos for acknowledging "this myth that men are sort of out to get you and that you should be constantly frightened."

"And this sort of discussion about rape culture which is being used to describe everything from the lyrics of songs -- famously that 'Blurred Lines' song, which has been banned from campuses -- rugby club banter, all sorts of things that are called rapey, which will lead to rape," she observed. "I think that that posits in this situation where all young women are scared that sexual assault is a fact of everyday life, and poses young men as a constant threat."

Gittos argued that women should differentiate between their personal experiences and "a broader objective reality."

"We know that sexual violence is committed by a minority of men, it's not the majority of men," he remarked. "For that minority that do go out and choose to commit these awful acts of violence and degradation against, we actually see that as less serious because we say, 'Well, any man has the potential to become a sexually violent person if he's given the opportunity.'"

Long, however, pointed out that "four decades of activism" by feminists and rape crisis centers had helped to teach the public that most rapes were committed by men who knew their victims.

"Can you see his point that it is a minority of men that are doing this?" BBC host Sian Williams asked Long. "And what's happening is we are creating a climate of fear amongst women that the potential exists for all men to do it."

"There's no 'we' to create a climate of fear," panelist Bonnie Greer replied. "Women are responding to their experience and they are talking to each other."

But Fox said that feminists were making problems worse "by actually talking of the threat of rape, broadening out and expanding the definition of what constitutes rape, which I find involves all sorts of things from regretted sex to all sorts of encounters that are difficult."

Long objected: "To try to frame the women's movement as being the problem is absolutely to shoot the messenger."

Viewers reacted in shock on Twitter to see that the BBC had titled the segment: "Is there too much panic around rape?"

@bbcsml there is no "too much panic" around rape. People are being taught that women are sexual objects. Everyone should be terrified of it
— jenn (@jenn) 1440926739.0

@bbcsml 2much panic around rape! Tell that2victims. 1victim is1 2many! Rape&Sexual intermediation is apart of our society! Panic is deserved
— Wayne (@Wayne) 1440927213.0