Black lives tend to be five years shorter. That's why we interrupt you 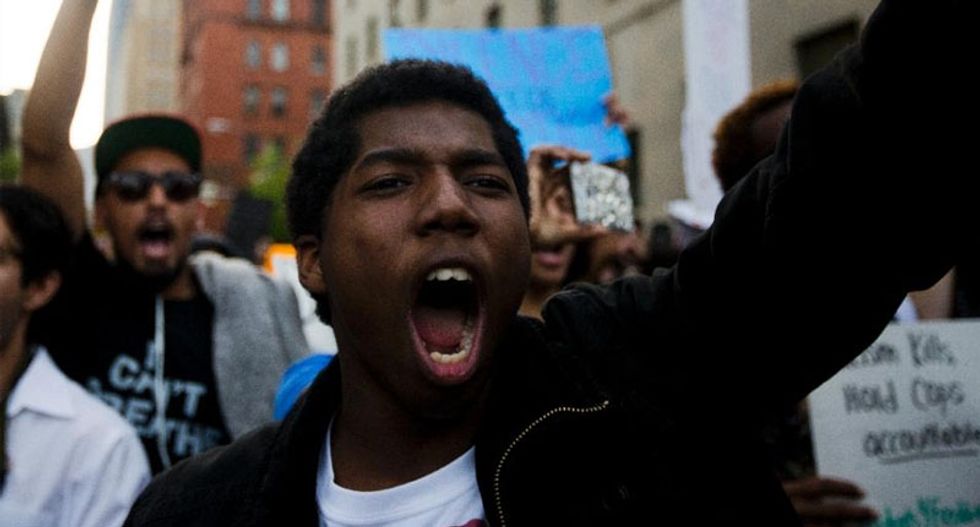 Ah, the irony of white people complaining about being interrupted by black people. White men live about five years longer than black men, and white women live about four years longer than black women – that’s including but beyond the crisis of police killings . The way I see it, white dudes have got to listen to a brother tell them why this is messed up for about five years before they can even think about saying their precious time is being wasted. They’ve got it to spare compared to us: they’re going to be smelling the roses in their golden years while we’re already pushing up the daisies.

Meanwhile, white ladies might be entitled to a year less of listening to black ladies before they start braying, since they “only” outlive them by four years. Still, remember that they earn an average of 78 cents to the dollar white men take home, while black women earn only 64, and that they have about 99 white men for every 100 white women to bolster their communities, while there are only 83 black men per 100 black women in ours. Given these are but a few of the unearned advantages of being a white woman, they might just want to listen to their sisters about their economic, social and literal states of death as much as they demand - and maybe buy them a cup of coffee before they beat them to the pearly gates.

Why are white people in such a hurry when black folks speak up about this? They’re going to have months and years to enjoy their better health, lower rates of cancer and vastly larger wealth – all free from the bother of pesky negroes! Most black peers they’ve ever known – say, schoolmates they knew when they were kids – will likely be six feet under while they’re still breathing on this earth.

And yet, even though they’ll outlast black Americans on the planet on average from somewhere between 1,460 to 1,825 days, many of them have been getting royally annoyed lately if we take up even a few moments of their time to point this out.

Despite all this, whiny, pathetic “progressives” grew enraged that Democratic presidential nominee Bernie Sanders, who had largely been mum on race until he’s been forced to confront it this year by Black Lives Matter, was interrupted in Oregon by black activists. But how was that problematic? Sanders, 73, has already lived longer than the average black man. He’s got time the time to listen.

Sanders’ rally attendees in Portland, who live in a state “founded as a racist utopia,” have the time to hear what they might not want to hear.

And Sanders’ white supporters – even at Gawker, who said Black Lives Matter shouldn’t “piss on your best friend” and actually argued the politics of civility for a change – should be quiet and reflect. They are inured from the dangers young black men face of being killed by police, and protected from lives cut short by hundreds of years of structural racism, health disparities , John Henryism and violence that are still felt today.

If white folks are annoyed by being held up by black people, they should take cold comfort in knowing that for a few years, they will continue to live while the rest of us are dead . If this upsets them, it’s not a form of privilege they can easily fix. But what they can do – anytime and anywhere a black person interrupts their monopoly on speech to tell them about the crisis and pain and emergency of racism – is to pay attention to them for a few minutes. Shut up. Listen.

What have they got to lose? A little time? White people are going to be alive for years after we’ve croaked. They can spare a couple minutes to hear our pleas of rage and urgency about our imminent demise before then.