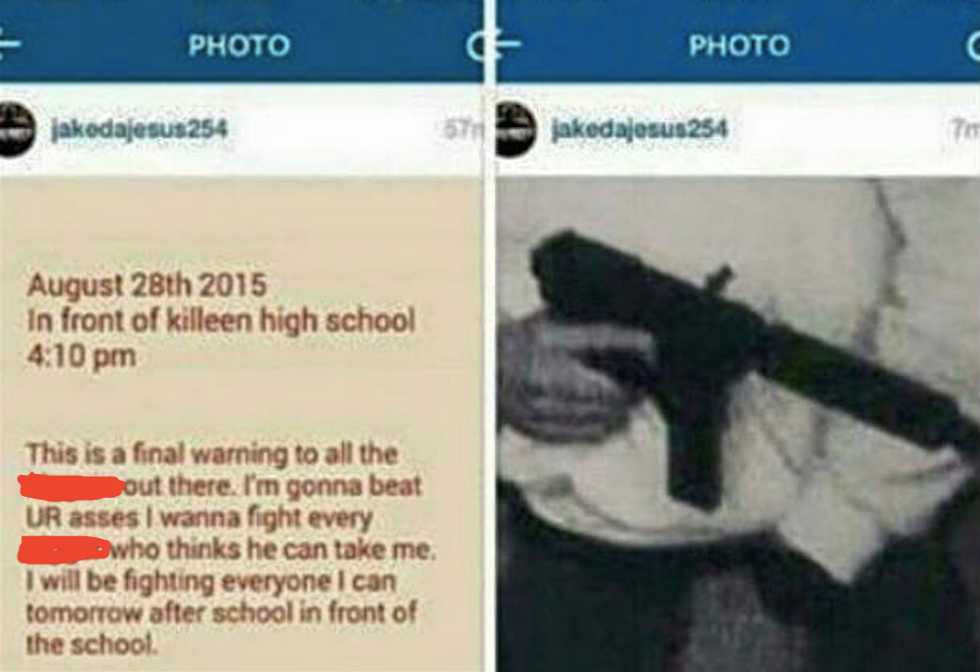 Parents of black students at a high school in Killeen, Texas kept their children at home last week after racist threats were made against them on social media.

According to KCEN-TV News, the threatening messages were posted to Instagram -- a photo sharing platform -- on Thursday night by an anonymous user using the name "jakedajesus254." They were addressed to students of Killeen High School.

In the first post, the user posted an image of a male figure holding a gun. In the second post was the message, "August 28, 2015, in front of Killeen High School, 4:10 p.m. This is a final warning to all the n*****s out there. I’m gonna beat UR ass I wanna fight every n****r who thinks he can take me. I will be fighting everyone I can tomorrow after school in front of the school.”

The New York Daily News reported that the post had been pulled down from Instagram by 10:17 p.m., but almost immediately, it began to show up on other social media platforms.

Jessica Reyna wrote on Facebook, "TO ANYONE WHO HAS KIDS THAT GO TO KILLEEN HIGH SCHOOL: There apparently is a threat from a STUDENT to SHOOT UP the school. I just confirmed this from the superintendent's office. It was posted on Instagram but the page has already been taken down. There was I THINK two posts but since it was taken down I can't say for sure. Posts said it was on the news but I couldn't find it on any news website."

The Killeen Independent School District said that they believe that 352 students were absent Friday out of the school's student body of 2,000.

School superintendent John Craft released a statement on Friday that said, in part, "The Killeen Independent School District Safety Department, KISD Police Department, and local law enforcement agencies are currently working collaboratively with the Killeen High School administration to investigate a social media posting pertaining to the safety of the school environment. At this time, appropriate measures have been taken to ensure the safety of the campus and classes will proceed as scheduled. All entities are dedicated to ensuring appropriate security measures are in place, and the safety of our students and staff remain a top priority."

The school's football game was not canceled Friday night, but extra security measures were in place.