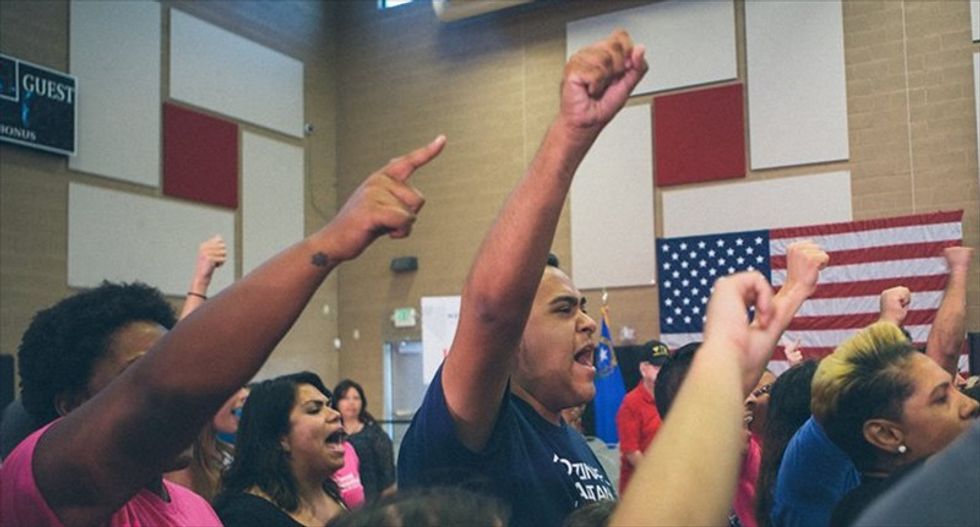 Protesters affiliated with the Black Lives Matter movement and other causes stand up during a Jeb Bush town hall on Aug. 12, 2015. [Netroots Nation Facebook page]

The protesters' appearance marked the first of its kind directed at a GOP candidate following demonstrations at events featuring Sen. Bernie Sanders, who is running as a Democrat. Bush reportedly left the event in North Las Vegas without his customary closing statement.

According to the Times, dozens of protesters associated with the movement began chanting "black lives matter" during the event with their hand raised. Two other demonstrators were kicked out at the start of the town hall when they used the same chant. The progressive Netroots Nation conference stated on its Facebook page late Wednesday night that the group also contained Planned Parenthood supporters and immigration activists.

Some supporters of the former Florida governor reportedly responded by chanting "white lives matter" and "all lives matter" at the group, while at least one Bush supporter and a protester traded obscene hand gestures.

Members of Bush's campaign told the Times that he met with members of the movement earlier in the day to discuss reforming the criminal justice system and "barriers to upward mobility."

"When my son steps out every day, I don't know if he's gonna step back in because of racial tension," one woman says, before asking, "How do you relate to that?"

"I relate to it by, as president, trying to create a society where there is civility and understanding," Bush responds. "And to encourage mayors, leaders at the local level, to engage so that there's not despair and isolation in communities."

He added, "With all due respect, a child that is educated, that believes that their chances of going to college, living a life of purpose and meaning, is important."

Footage of the protest, as posted online, can be seen below.

Video of Bush taking questions can be seen here.