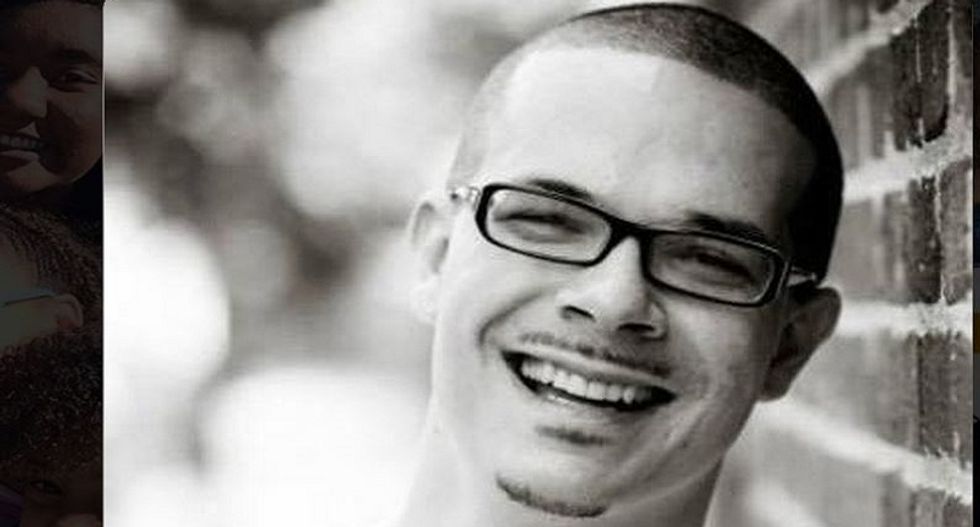 King was responding to accusations first published by conservative blogger Vicki Pate, who has admittedly “stalked” King and his family. Pate began writing about King after a dust-up with conservative blogger Chuck C. Johnson over the killing of Michael Brown in Ferguson. Pate uses mostly circumstantial evidence to “prove” King is white, though King claims to be biracial.

King, in turn, said his family is mixed to the point that "no two siblings in my family have the same set of parents," then adding, "If you have known me from when I was in elementary school at Huntertown Elementary until now, you've known me as black or bi-racial."

He said he has never lied about his race, publicly or privately.

"Out of LOVE for my family, I've never gone public with my racial story because it's hurtful, scandalous, and it's MY STORY," he tweeted. Right wing bloggers don't really care about his race, they just "want me to shut up."

He did not make any false claims to get into historically-black college Morehouse or to win an academic scholarship allowing him to go, he wrote.

Pate, who runs the blog Re-NewsIt, claims to have tracked the lineage of King to a white father. King has claimed to be the son of a white mother and black father, according to the New York Daily News.

"Over 20 years ago, when I was 15 years old, I was beaten so badly I missed the next 20 months of school recovering from fractures to my face and ribs, and severe injuries to my spine," King responded via Facebook. "I had three brutal spinal surgeries during that time and it changed the entire course of my life. I received counseling for PTSD and have had multiple spinal surgeries and years of physical therapy since."

Breitbart cites the Daily Caller, another conservative website, in refuting King's claim that he had serious injuries from the 1995 attack at his high school in Kentucky. The Caller's Chuck Ross cites a police report that he says characterizes King's injuries as minor.

A birth certificate obtained by Breitbart that they say belongs to King shows parents as Jeffery Wayne King and Naomi Kay Fleming. According to Breitbart, taking King's word that his mother is white, Pate went on a mission to prove his father is also white. The blogs display a photo of a gray-haired, brown eyed man who appears to be white, claiming they have proof he is King's father.

The conservative websites questioned whether King had misled Oprah Winfrey when he won a scholarship from her to attend Morehouse College, a historically black institution.

King said the claims were made by known white supremacists and are false and that he never mischaracterized himself to win the scholarship.

"Every mentor and coach and advisor I have, without fail, has told me NOT to respond to any of this. For weeks I've ignored it all," he wrote on Twitter.

"First off, the key facts about my biological relatives are all wrong. They tried, but my family, like many of yours, is one big mess," he wrote. "Like many of you, I have siblings I don't know, siblings I'm estranged from, and a family full of secrets, divorce, affairs, etc."

As of Wednesday, he had the support of fellow activists.

"You literally can't believe what these not actually news sites claim," tweeted writer Mikke Kendall. "They can [and] do post damned near anything because they can."

"[Y]ou have my support. Keep your head up," wrote DeRay McKesson.

Pate says she began obsessing over King's social media because of a "huge lie he told" about Chuck C. Johnson, a rash blogger and founder of GotNews, who was banned from Twitter after threatening civil rights activist DeRay McKesson.

"Shaun posted the child molestation arrest record of another Charles Johnson with a different birth date than that of the owner of GotNews," Pate wrote on her website. "He did this deplorable thing because Charles had filed an FOIA request for Michael Brown's juvenile record. I was so appalled by this I decided to look into Mr. King's background."

She suspected he wasn't black and wanted to prove her suspicion after King called her a racist, Pate writes.

"I decided to research him on a personal level, I've never believed him to be black, which means he has no right to call me, or anyone else, 'racist' because they've said 'mean' things about him. It is my opinion that the reason Shaun King has never been outed for his scams is because of his 'black Pastor' status (and likely the celebrities he duped don't want to be associated). ANY white person going after the credibility of a black Pastor can expect to have their 'racist' ass handed to them on a silver offering platter. Been there, done that."