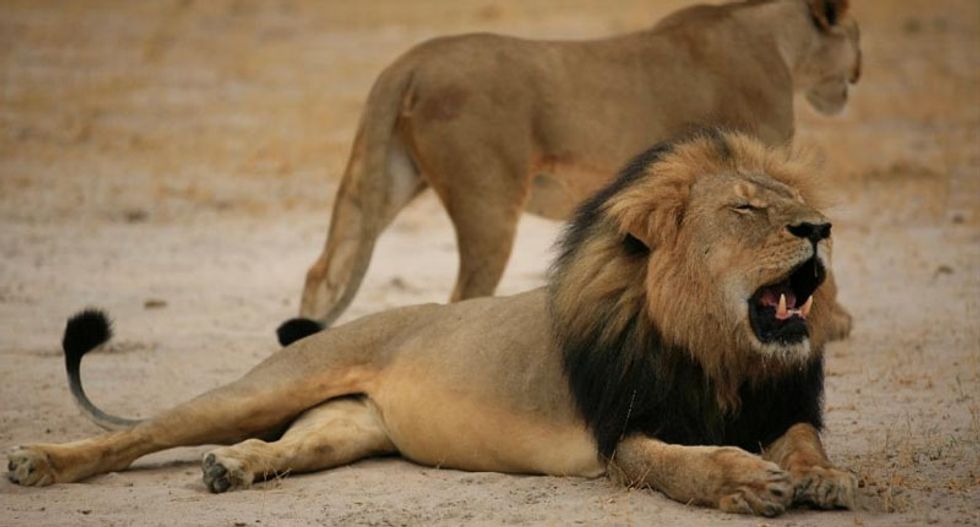 Much-loved Zimbabwean lion "Cecil", pictured on October 21, 2012, was lured outside the Hwange National Park boundaries by bait and shot by a bow and arrow (AFP Photo/)

The trial of professional Zimbabwean hunter Theo Bronkhorst, who led the expedition that saw a famed lion called Cecil shot dead, was postponed on Wednesday until next month after an application from his lawyers.

Magistrate Lindiwe Maphosa ordered the trial to reconvene on September 28 to hear the case against Bronkhorst, who has been charged with "failing to prevent an illegal hunt".

Bronkhorst, 52, denies any wrongdoing over the hunt in early July when Walter Palmer, a dentist from the US state of Minnesota, paid $55,000 (50,000 euros) to shoot the lion with a bow and arrow.

The hunt provoked worldwide outrage after it emerged that Cecil was a well-known attraction among visitors to the Hwange National Park and was wearing a tracking collar as part of an Oxford University research project.

"I feel sorry for my client (Palmer). He is a good man. He did nothing wrong," Bronkhorst told reporters as he left the court in Hwange town.

Palmer, an experienced trophy hunter, has been hounded on social media over the killing, and went into hiding after demonstrations outside his dental practice.

He apologised for killing Cecil, a 13-year-old male renowned for his distinctive black mane, and appeared to blame Bronkhorst for misleading him.

But Bronkhorst said he was innocent of all charges and had obtained all the permits required to kill an elderly lion that was outside the national park boundaries.

Bronkhorst was granted $1,000 bail last week. He was ordered to surrender his passport and report three times a week to his local police station.

Local landowner Honest Ndlovu was also due to be charged, but his case has been postponed.

Zimbabwean authorities have launched a crackdown on illegal hunting since the death of Cecil, though some have argued that hunting plays a key role in conservation and provides essential revenue and jobs.

The hunting of lions, leopards and elephants in the area around the national park in western Zimbabwe has been suspended, as has hunting with bows and arrows.

Hunting tourism brings about $40 million a year into the country.

"I was engaged by a client to do a hunt for him and we shot an old male lion that I believed was past his breeding age. I don't think that I've done anything wrong," Bronkhorst told AFP last week.

"It has probably changed my family’s life, my business, forever... We have had many, many death threats.

"If you cannot have a sustainable offtake of wildlife, you're not going to have wildlife."

The United States has yet to respond to Zimbabwe's request for Palmer to be extradited to face charges.

The Wildlife Conservation Research Unit at Oxford University, which had tracked Cecil since 2008, said it had received more than £550,000 ($860,000, 785,000 euros) in donations over the past week, which would be used towards conservation work in Zimbabwe.