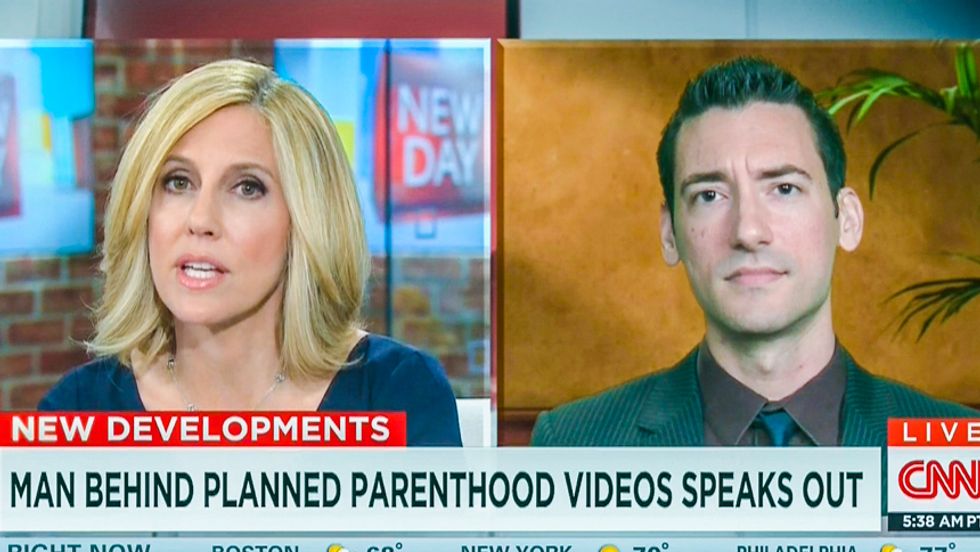 David Daleiden of the Center for Medical Progress, who was behind the recent deceptively edited anti-Planned Parenthood videos, insisted to CNN host Alisyn Camerota on Tuesday that he was not personally a violent person even though his organization was tied to violent extremists.

"Critics of your organization say that you're not journalists as you purport to be on your website, but rather you're violent extremists," Camerota noted. "They say that you are operating under the guise of investigative reporting, but really you're trying to shut down all Planned Parenthoods and women's access to things like birth control and other services that they provide."

"Do you have any ties to Operation Rescue?" the CNN host asked.

"I'm not a violent person and I never have been and I never will be," Daleiden insisted. "Troy Newman is one of the board members of the Center for Medical Progress."

"And Troy Newman is the president of Operation Rescue," Camerota pointed out, adding, "Operation rescue does have a history of threatening violence against abortion clinics."

In fact, lawsuits against Operation Rescue for using physical force against people trying to enter abortion clinics date back to the 1980s. And the group has been linked to numerous violent actions over the years. Operation Rescue member James Kopp admitted to the 1998 murder of abortion doctor Barnett Slepian. In 2009, the words "Op Rescue" were found on an envelope inside the car of the man who murdered abortion doctor George Tiller.

During the interview with Daleiden on Tuesday, Camerota pointed out that biotech companies had confirmed that Planned Parenthood never sold fetal tissue and that the group was only reimbursed for the cost of storage and processing as allowed by federal law.

Daleiden called it "really cute" that the biotech companies would back up Planned Parenthood. And he promised that the group would release a new video later on Tuesday even though they were already facing two restraining orders.

"You're going to see evidence in it of Planned Parenthood is actually willing to sell fully intact fetuses to buyers of aborted fetal tissue," Daleiden said. "It's prima facie evidence of born alive infant cases."