CNN host to anti-abortion GOPer: 'Where does it stop' if you can force us to carry Down Syndrome fetuses? 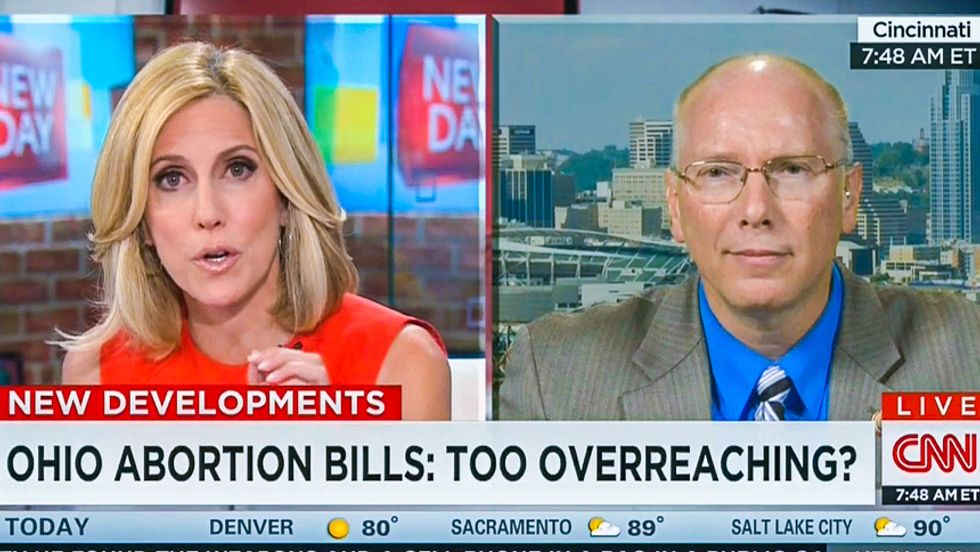 Republican Ohio state Rep. John Becker told CNN host Alisyn Camerota that sponsors of a bill to force women to carry fetuses with Down syndrome never talked to parents before filing the legislation.

The bill, filed earlier this year by Republicans in Ohio, would ban abortions for women who did not want to carry a fetus that had been diagnosed with Down syndrome.

On Monday, bill co-sponsor John Decker explained to Camerota that the bill would punish abortion doctors with jail time but not the mothers.

"Did you talk to parents who have had to make this decision?" Camerota wondered.

"Well, no," Decker admitted, adding that he had met people with Down syndrome who contributed to society.

"I mean, Representative, where does it stop?" she asked. "What else can the state tell you about how many children you should have or what other personal decisions are you comfortable with the state making for you?"

"This is a matter of a life and death decision," Decker insisted. "And sure, this gets into the hard cases. And when you are making law based on hard cases, that generally makes for bad law. And so carving out exceptions for fetal abnormalities, and in this particular case, oftentimes -- it's not unusually anyway -- when a baby is diagnosed with Down syndrome, the diagnosis is wrong. I think that occurs 20 percent of the time."

"I'm not sure about those statistics," Camerota replied. "It's nice to think that all those babies would be adopted but history doesn't necessarily prove that they are always adopted. In fact, many are institutionalized at great cost."

"There is always cost incurred with anyone with handicaps," Decker remarked. "Just because somebody has a disability, you know, doesn't mean they should be discriminated against in the womb."