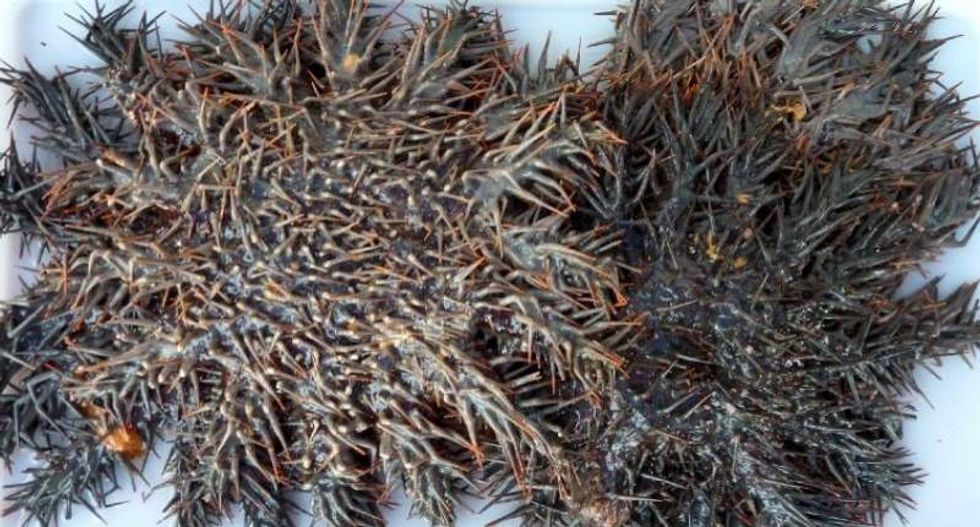 This photo taken on September 18, 2014 shows two native predatory coral-feeding crown-of-thorns starfish in a container in Cairns after been removed from the Great Barrier Reef. Photo by Glenda Kwek for Agence France-Presse.

Under attack from hordes of ravenous starfish, Pacific coral is getting help from an unexpected source -- seaweed, an arch enemy, researchers said on Wednesday.

Seaweed is no friend of the fragile ecosystems of coral reefs, pumping out harmful chemicals, blocking out life-giving sunlight, and rubbing up against and damaging the threatened marine invertebrates.

But it turns out the plants also fend off coral-munching crown-of-thorns starfish, which pose an even bigger threat, according to a study published in Proceedings of the Royal Society B: Biological Sciences.

So being covered in seaweed represents the lesser of two evils for coral: "better than being eaten," said study co-author Cody Clements, a graduate student at the Georgia Institute of Technology in the United States.

"Corals surrounded by seaweeds were virtually immune to attack by the sea stars, essentially converting seaweeds from enemies to friends," said co-author Mark Hay, a professor at the university.

The research could be helpful in managing coral reefs, which are under increasing threat from climate change, chemical run-off from farming, and the crown-of-thorns starfish.

Sea stars have a unique feeding mechanism by which a sack-like stomach emerges from their mouth to envelop and externally digest the corals' living tissue, killing them.

"All they leave behind are the coral skeletons," said Clements.

Crown-of-thorns sea stars are a major problem in the Pacific, which is home to the world's biggest coral reef ecosystem, the Great Barrier Reef.

Its coral has declined by more than 50 percent over the past 25 years with sea stars getting much of the blame, the researchers said in a statement.

In a two-year study in a protected marine area off the coast of the Fiji islands, Clements examined what sea stars and seaweed did to coral.

He used portable coral samples to test their reaction to different sizes of seaweed growth.

In the absence of seaweed, coral mass more than doubled in about four months. But coral which shared its habitat with multiple seaweed fronds grew a mere 40 percent over the same period.

Researchers then moved on to studying sea star attacks, and found they targeted exposed parts and not those protected by plant growth.

The frequency of attacks was 50 percent lower on coral surrounded by two seaweed fronds.

The scientists placed two coral colonies in separate cages with a sea star -- one containing seaweed, the other without.

"The sea stars were deterred," said Hay. "They wouldn't eat the coral surrounded by the seaweeds."

The reason the plants work as a deterrent was not known, but the team speculated the seaweed may present a physical barrier, hiding the coral or making it harder to get to.