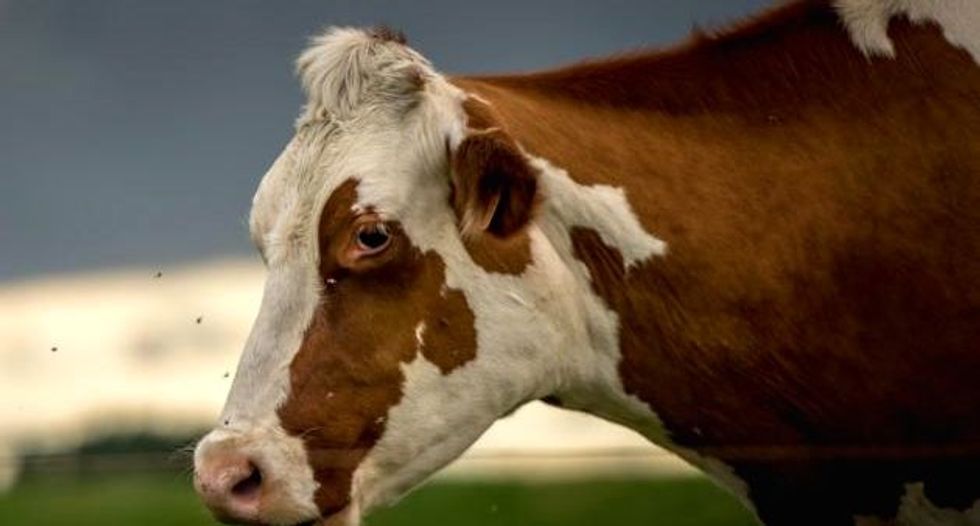 AFP/AFP/File - A cow typically emits some 500 grams of methane per day, produced as part of its digestion process

A new dietary supplement given to cows has shown a 30 percent drop in methane emissions from the animals, dampening the production of a greenhouse gas that impacts global warming.

Cattle on farms account for 44 percent of global methane emissions stemming from human activity -- in this case, the breeding of cattle. And the reduction could be a boon for the fight against climate change, according to the authors of a study published in the Proceedings of the National Academy of Sciences.

"If approved by the US Food and Drug Administration and adopted by the agricultural industry, this methane inhibitor could have a significant impact on greenhouse gas emissions from the livestock sector," said Penn State professor Alexander Hristov.

Fermentation in the stomachs of cattle, sheep and goats produces methane as part of digestion. Each cow emits some 500 grams of methane per day.

A substance called 3-nitrooxypropanol developed by the Dutch company DSM Nutritional Products and given as a dietary supplement blocks the enzyme used for methane production without affecting digestion, the study found.

Research was conducted for three months in Pennsylvania stables with 48 cows. The supplement also allowed more weight gain in the animals due to the reduction in methane formation.

Researchers said the cows' health and milk production was not affected by the supplement.

For Ermias Kebreab, a University of California professor in animal science who was not involved in the study, the results were very encouraging.

"It has big promise because we did not expect to get this level of reduction by applying this compound," he said, pointing out it was very different than other methane solutions such as manipulating cows' diet.

"I would recommend to do this kind of study on a longer period of time. It should be done for a full year and in different locations as well."