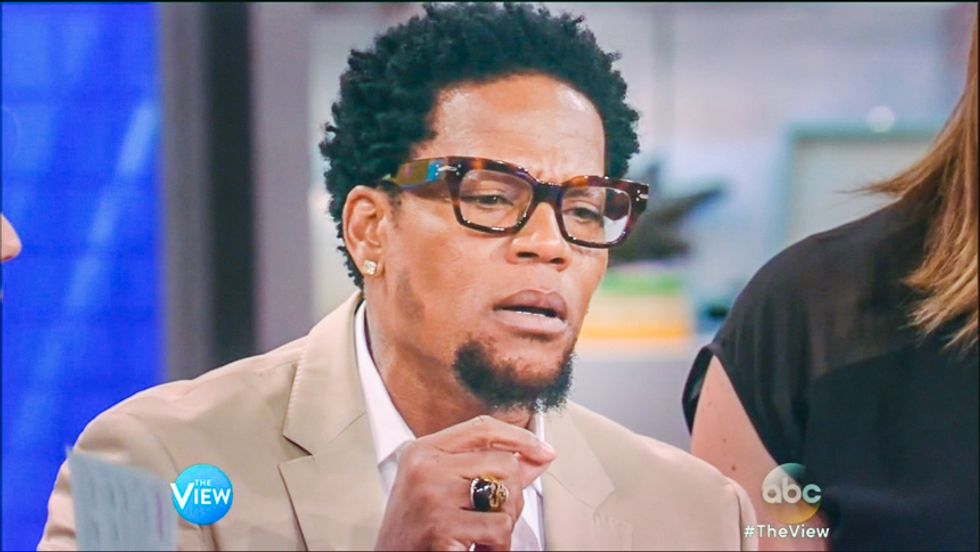 Comedian D. L. Hughley said on Tuesday that he was having a hard time taking the Republican presidential debates seriously because including Donald Trump was "like Flavor Flav winning a spelling bee."

Speaking to hosts of ABC's The View, Hughley pointed out that the Thursday debate being held on Fox News was similar to a reality show.

"The more racism that Donald Sterling, I mean, Donald Trump -- the same guy - spews, the higher his numbers," he observed. "If he said the N-word, he [is] going to be president tomorrow."

"Taking him seriously in a debate, is like Flavor Flav winning a spelling be," Hughley added, causing host Whoopi Goldberg to double over in laughter. "When he said out of his mouth, he said, Mexico doesn't send it's best. Nobody in America sent their best. Not the Italians, not the Jews, not the Russians, nobody sent their best. Everybody sent people who wanted to get away."

"The whole thing [written by poet Emma Lazarus], 'Give us your tired, your poor, your huddled masses yearning to breathe free, The wretched refuse of your teeming shore. Send these,' if we don't mean it, we should scratch it off."

"Or at least, put 'P.S. Except for Mexicans,'" Hughley concluded. "If we don't mean it, we should do that."