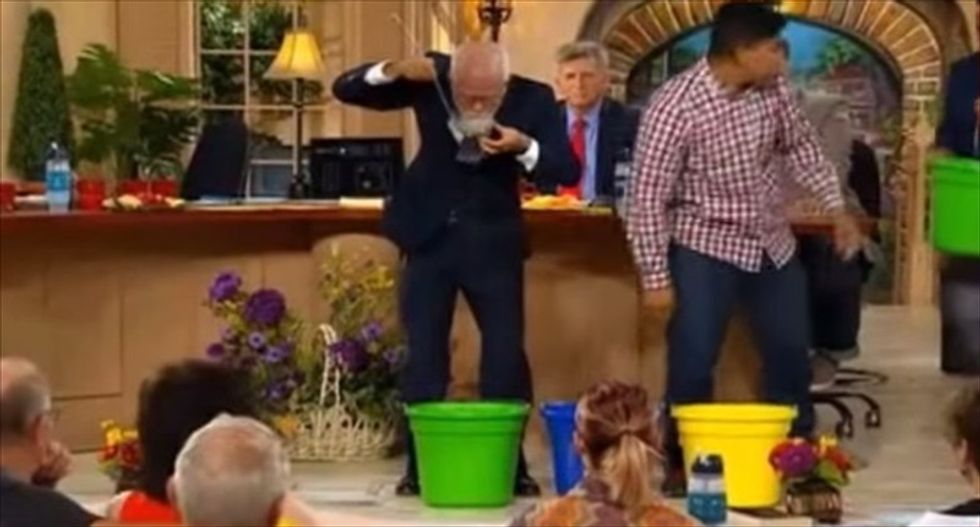 Televangelist Jim Bakker hawked a $160 bucket of potato soup on his show on Monday, boasting that it would help his smarter followers to survive a coming war, Right Wing Watch reported.

"I know you don't wanna hear this," Bakker said while lifting a one of the nearly 50-pound buckets. "You're gonna dream Jim Bakker on TV telling you 'get ready,' and you'll [say] 'Oh my God, why didn't I order something?'"

Bakker went so far as to take an awkward sip from one of the six-gallon buckets, which was promoted with an on-screen graphic saying they held 323 servings. He can be seen coughing after tasting the soup, before insisting, "It's so good."

Footage from the program also shows him offering a package of seven years' worth of "tasty new foods" with a $3,500 donation. The package includes macaroni and cheese and chocolate pudding, which Bakker said would allow survivors of the undefined conflict to continue celebrating birthdays.

"You put that chocolate on top, you can have parties when the world is coming apart," he gushed.

Bakker's website currently has a variety of these types of packages on sale, including a $250 bucket of pizza. However, none of the foods listed matches other recommendations for useful food to have on hand after a disaster, like canned goods and bottled water, among others.

Watch Bakker make his pitch, as posted by Right Wing Watch, below.