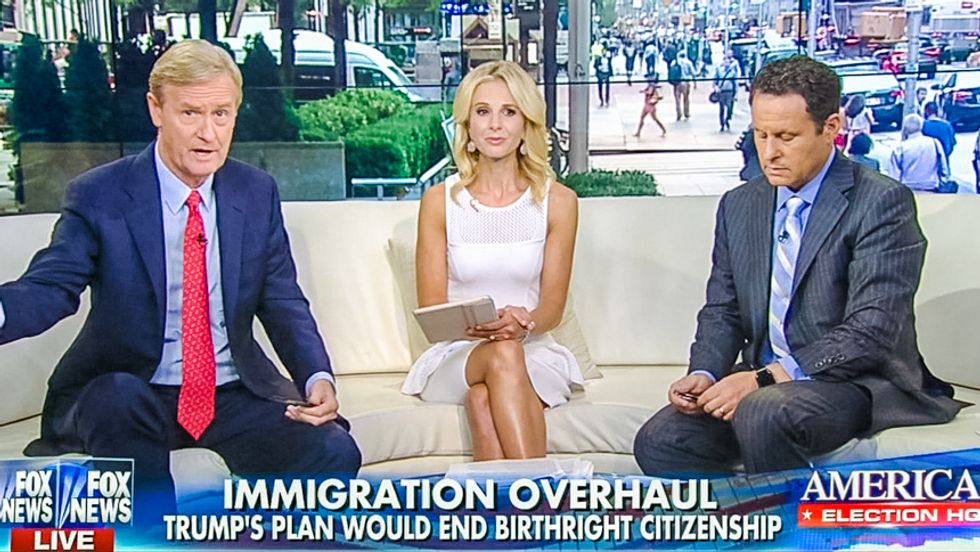 The hosts of Fox & Friends suggested on Wednesday that the 14th Amendment did not grant citizenship to the children of undocumented immigrants because it was meant only for slaves, which is a constitutional interpretation that is popular among white supremacist groups.

During an interview on Tuesday, Republican presidential candidate Donald Trump told Fox News host Bill O'Reilly that he would be able to deport the children of undocumented immigrant because their claim to citizenship would not "hold up in court."

On Wednesday, Fox News host Steve Doocy claimed that Trump could be right because the 14th Amendment was "specifically about slaves."

The Fox News host said that a "DOJ attorney" told him that "because the 14th Amendment was written specifically about slaves, many lawyers think the 1898 case involving this fellow that was born here in this country to Chinese parents was wrongly decided by the supreme courts."

"So, I see what Mr. Trump is talking about right there," Doocy opined. "But still, practically, what's going to happen?"

"How do you implement that?" co-host Elisabeth Hasselbeck asked. "Just go knocking on doors and finding babies?"

Co-host Brian Kilmeade argued that it would be impossible to deport 11 million undocumented immigrants and their children.

"There's no way we can afford to kick out 11 million people," he insisted.

"They've got to do something," Doocy remarked. "Is that the key? Stay tuned."

The idea that so-called "anchor babies" are not truly American citizens is a tenet of white supremacist websites like Stormfront.

"The Children of the illegal immigrants in this country are NOT U.S. citizens, since they are the children of Mexican citizens, not of American citizens," a Stormfront member explained in 2006. "Indeed, the Jews who were born in the US are not citizens of the US by the accident of birth. As their allegiance is with Israel, the People and the State, they are not citizens, even though they may verbally take the Oath of Allegiance in words (as they have done in other countries, in order to have the normal privileges and immunities of the citizenry)."

"Congress presumed that the freed slaves were not citizens of some other country, since their ancestors had been removed or abandoned their homeland long ago. This presumption was correct, but it does not give it authority to make citizens out of people who are not citizens of any country. Citizenship is not something that can be dispensed."

"When a 'constitutionalist' begins minimizing the Amendment, it's a sign of ignorance; when a politician or a judge does it, it's a sign of something worse." The Atlantic's Garrett Epps wrote.