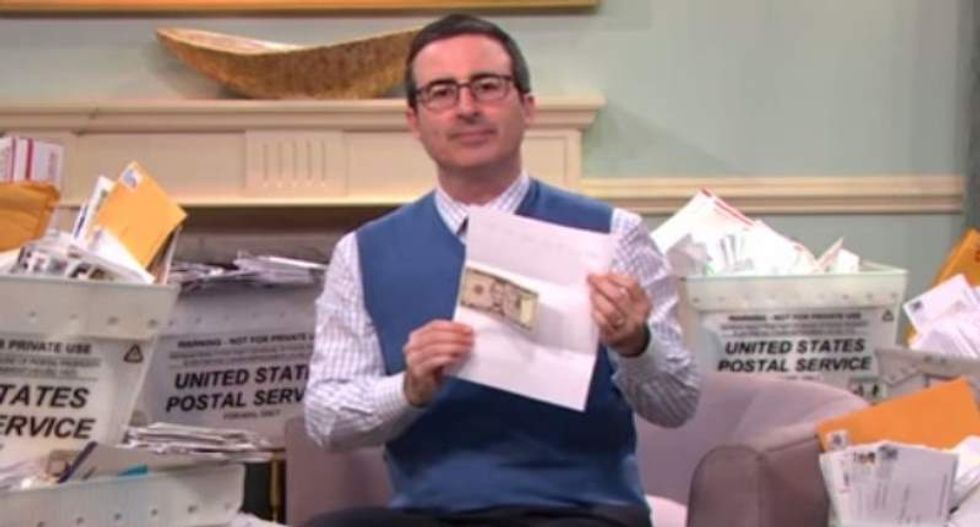 Last Week Tonight host John Oliver revealed on Sunday that his attempt to raise "seed money" for his perfectly legal mock mega-church exceeded his expectations, showing viewers boxes full of correspondence to go with the actual seed bags and cash donated to the campaign.

"We also received multiple checks, including this one for $65 billion dollars, which you might have sent in as a joke," Oliver explained. "But guess what? We're f*cking cashing it."

Oliver said that the Our Lady of Perpetual Exemption church had received thousands of dollars since he unveiled the campaign last week while reporting on "prosperity gospel" preachers.

In one case, he said, a viewer sent in a $100 trillion dollar bill from Zimbabwe.

"I was actually genuinely excited about this and was about to send 100 trillion blessings your way," Oliver said to the unidentified donor. "Until I checked the exchange rate and found out this is worth about 40 cents. So now, I wouldn't even bless you if you f*cking sneeze."

He also showed the audience actual seed bags that he received, stressing that the term "seed money" was strictly metaphorical for his purposes.

"The more money you send in, the more blessings will be returned to you," he insisted. "And that is still something I'm -- amazingly -- legally allowed to say."

As Newsweek reported, the success of Oliver's original report has prompted scrutiny against the Internal Revenue Service for failing to monitor "prosperity gospel" churches more closely.