GOP senator: I can lecture women on pregnancy because abortion is a 'men's issue' 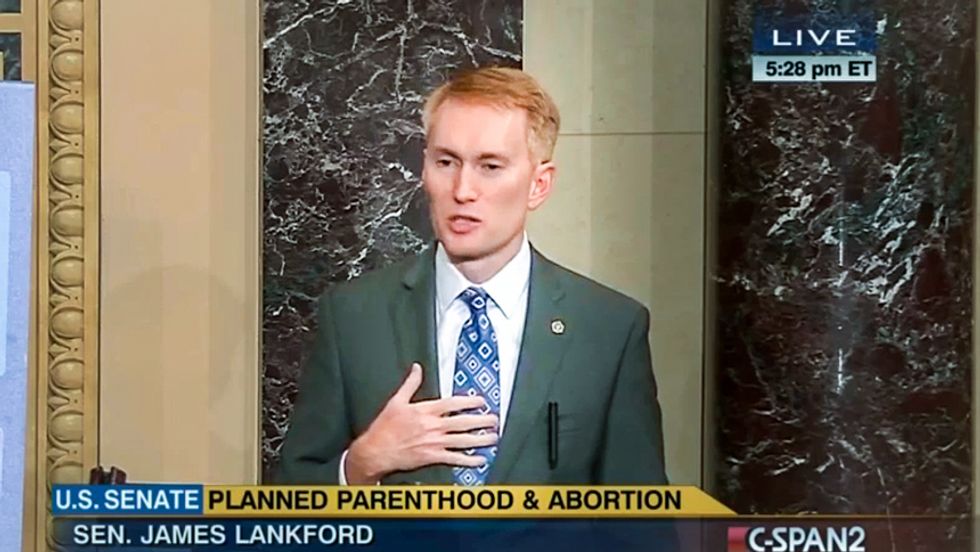 Republican Sen. James Lankford of Oklahoma argued on Monday that he had the right to lecture women about whether or not they should get abortions because he had impregnated his wife and "had something to do with the birth."

During a debate on the Senate floor about whether or not to defund Planned Parenthood, Lankford argued that the "culture has been wrong" to allow abortion.

Lankford said that it was "entirely reasonable" to take Planned Parenthood's funding and "commit it to organizations who do full women's health."

Sen. Barbara Boxer, however, said that she was bothered by men like Lankford lecturing women about reproductive health.

"I just don't like lectures by men about what it's like," Boxer told Lankford. "I'm pro-choice and I just have to say, using pregnancy as a political football doesn't sit well with the people I represent and the people of this country."

"We have to respect one another," she continued. "I respect your view entirely. I'm asking you to respect mine. Keep Uncle Sam out of my private life and my children's and my grandkids' and your's. Families will make these decisions with their God, with their doctor."

Boxer concluded by calling the effort to defund Planned Parenthood "a continuation of the Republican war on women."

In the end, the measure did not pass the 60 vote threshold necessary to overcome a filibuster, failing with a 53-46 vote.