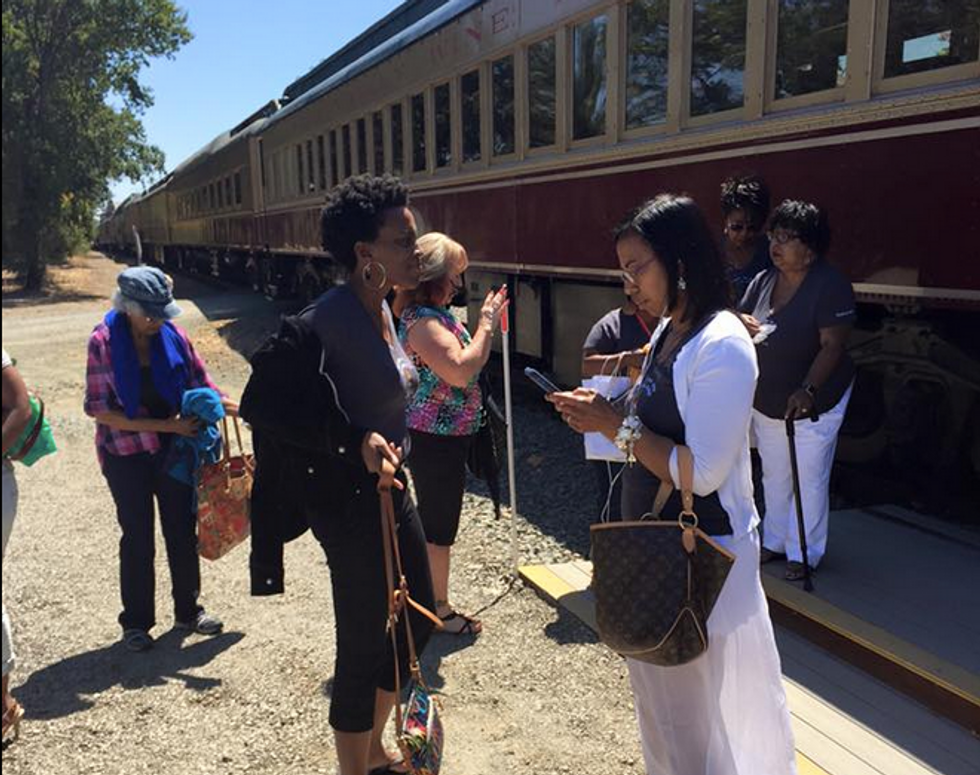 A group of 11 black women say they were humiliated and kicked off a train taking them on a trip through California's Napa Valley wine country on Saturday for "talking and laughing too loudly."

According to SFGate.com, Lisa Johnson, 47, and her friends were riding the Napa Valley Wine Train for the first time. Now, they feel they have been discriminated against and singled out for humiliation because of their race.

“It was humiliating. I’m really offended to be quite honest,” said Johnson. “I felt like it was a racist attack on us. I feel like we were being singled out.”

The group of friends have all been given refunds from the train company, but they want a public apology.

However, Napa Valley Wine Train spokeswoman Kira Devitt said on Sunday that her company had "received complaints from several parties in the same car and after three attempts from staff, requesting that the group keep the noise to an acceptable level, they were removed from the train and offered transportation back to the station in Napa.”

Johnson and her book club boarded the train at 11 a.m. on Saturday for their annual late-summer trip through wine country.

Johnson said on Facebook that everything seemed normal as they and the other passengers ordered tastings and glasses of wine as they rode the 18-mile trip through some of the most famous vineyards and wineries in the world. The party may have been "rambunctious" at times, she said, but never out of hand.

The ladies -- who included an 83-year-old grandmother among their number -- drank toasts and took photos with other passengers on the sold-out train ride.

But then, Johnson said, a manager came and told them to quiet down.

“The train is set up to be with your friends, to drink wine and have a good time,” Johnson said. “We were thinking, ‘Who are we offending?’”

The manager returned not long after and told the women that "this isn't going to work," and if they didn't "tone it down," they would get put off the train.

“It was a bizarre thing for all of us,” Johnson said, saying that the group tried to cooperate.

A woman passenger admonished the group by saying, "This isn't a bar."

But when the train pulled into St. Helena station, the women were marched off the train past six cars of other passengers and delivered into the hands of officers from the Napa Valley Railroad Police and the St. Helen Police Department.

“People were looking at us,” Johnson said. “To get escorted into the hands of waiting police officers. That’s the humiliating part.”

No police action was taken at the station, but the women are angry, and their story is rapidly going viral. On the social medium Twitter, it has spawned the #LaughingWhileBlack hashtag.

“The Napa Valley Wine Train does not enjoy removing guests from our trains, but takes these things very seriously in order to ensure the enjoyment and safety of all of our guests,” said DeVitt, adding that people are asked to leave the train about once per month.

An employee of the Napa Valley Wine Train company posted a since-deleted Facebook message complaining about the women.

“Following verbal and physical abuse toward other guests and staff, it was necessary to get our police involved,” the employee wrote. “Many groups come on board and celebrate. When those celebrations impact our other guests, we do intervene.”