Health officials warn that you could die playing GOP debate drinking games: 'It's just a formula for disaster' 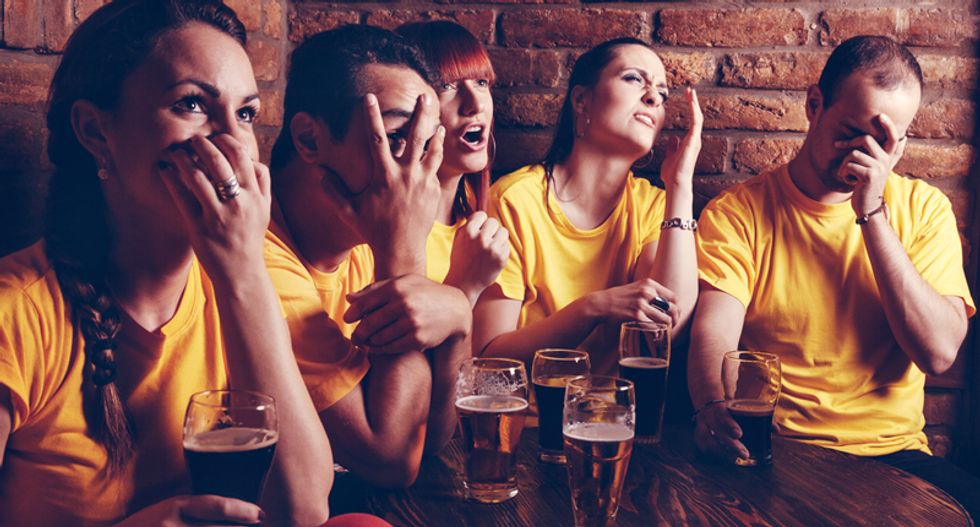 A group of friends worry their team won't win (Shutterstock)

Public health officials are urging Americans to exercise caution if they choose to participate in "drinking games" during the first Republican primary debate this Thursday in Cleveland, Ohio.

"You simply can't drink every time one of these guys says something silly," said Surgeon General Vivek Murthy during a Wednesday morning press conference. "We've got three candidates who are prone to gaffes -- Jeb Bush, John Kasich and Scott Walker -- and then a half-dozen obscure goofballs vying with Donald Trump for a little media attention. It's just a formula for disaster."

Murthy suggested that people play a safer variation of the traditional debate drinking game by only consuming alcohol when one of the candidates says something reasonable.

"We're not saying that people shouldn't have fun participating in the rotting vestiges of our once-great democracy," he said. "Just do it responsibly. Instead of, say, shotgunning a beer when Ben Carson compares abortion to a planet-killing meteor wiping out humanity, consider taking a shot if Jeb Bush acknowledges that human activity is contributing to climate change," he said. "And that drink might even have some therapeutic value when he goes on to argue that we shouldn't do a damn thing about it."

According to Dr. Lawrence Goldfarb, a toxicologist at the Centers for Disease Control and Prevention, an average man should consume no more than four units of alcohol per day and an average woman should consume no more than three. "So even if you only drank when someone made a dopey, half-baked Neville Chamberlain analogy, you'd still be ingesting potentially dangerous quantities," said Goldfarb. A "unit" of alcohol equals around 12 ounces of beer, five ounces of wine or 1.5 ounces of 80-proof liquor.

First responders are preparing for a repeat of 2012, when emergency rooms were inundated with a surge of alcohol-related admissions. A study conducted by researchers at the Tufts University School of Medicine estimated that there were 70,000 additional hospitalizations, on average, following each of the 104 "clown car" debates during that election cycle. "That just counts alcohol poisoning and other drug overdoses," explained Dr. Pritam Baruah, one of the authors of the study. "The numbers don’t include injuries from motor vehicle accidents or people's misguided attempts to wash their brains out with bleach."

"The data show that it's not a clown car at all," added Baruah. " It's a clown bus, and far too many smug liberals are being inadvertently thrown under its wheels by their self-satisfied friends on Twitter."

Coastal cities and liberal college towns were among the hardest hit. "The last time these guys competed in the marketplace of ideas, it looked like a war-zone in here," said Jack Murphy, an ER physician at the Ann Arbor Regional Medical Center in Ann Arbor, Mich.

"They brought in one semi-conscious kid -- he was maybe 25 -- who kept repeating, 'energy, you idiot!' over and over again like some kind of slurred mantra," recalls Murphy. "It wasn't until we'd pumped his stomach and given him five units of plasma that it became clear that the idiot was former Texas Governor Rick Perry and the Department of Energy was the third agency he'd wanted to shut down."

"We saved most of them," Murphy added, looking wistfully around his ER as technicians stocked extra supplies. "But we couldn't save them all." There were at least 372 fatalities resulting from alcohol poisoning during the 2012 Republican primaries, according to the Tufts study.

But public health experts warn the threat to public health may be even greater this Thursday because the officially sanctioned primetime debate will be preceded by an earlier forum for seven candidates who didn't have enough support in the polls to qualify for the main event. "You're looking at a solid, five-hour block of wingnuttery that starts right smack in the middle of happy hour on the East Coast," said Murphy. "We're certainly preparing for the worst."

They also pointed to the potential for higher numbers of admissions due to expanded health insurance coverage under Obamacare.

At the iconic Townhouse Tavern in Washington, DC -- believed to be the birthplace of the progressive "Netroots" movement -- bartender Rex "Tweety" Matthews was also expecting a raucous night. "Hell, they're calling the first debate the 'kids' table'," he said. "How can any progressive resist knocking back a few and exchanging some totally inappropriate Josh Duggar jokes even before the evening really gets started?"

The primetime debate will be broadcast on Fox News at 9 p.m. EDT. Bret Baier, Megyn Kelly and Chris Wallace will moderate. The "kids' table" debate starts at 5 p.m. EDT, and will be moderated by Bill "Eddie Haskell" Hemmer and Martha MacCallum.