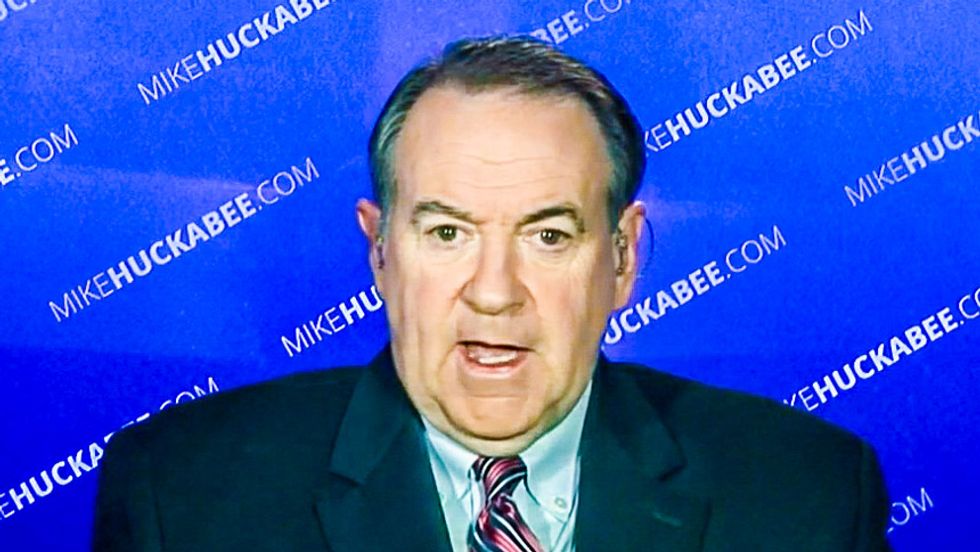 Thursday night's GOP debate was dominated by the antics of the party's loudest and most extravagantly controversial candidate, Donald Trump. But with little notice, former Arkansas governor Mike Huckabee may have made the most extreme policy proposal.

Huckabee wants to grant fertilized eggs and fetuses personhood, a legal theory so radical even many in the anti-abortion camp oppose it, Right Wing Watch reports.

"A lot of people are talking about defunding Planned Parenthood, as if that's a huge game changer," Huckabee said in response to a question from co-moderator Chris Wallace. "I think it's time to do something even more bold. I think the next president ought to invoke the Fifth, and 14th Amendments to the Constitution now that we clearly know that that baby inside the mother's womb is a person at the moment of conception."

According to an analysis by Right Wing Watch, using what some see as a loophole to circumvent Roe v. Wade and grant personhood status to zygotes and fetuses would be catastrophic. Aside from rendering all abortions, potentially miscarriages and even some birth control methods criminal, it could upend everything from inheritance law to Census records.

NPR reports the impacts of personhood could range from annoying to dangerous.

Legally separating a woman from her pregnancy presents problems if a pregnancy becomes life threatening. In ectopic pregnancies, for example, a fertilized egg implants outside the uterus and creates an emergency situation, ACLU attorney Kolbi-Molinas pointed out.

"Ectopic pregnancies are not viable pregnancies," Molinas told NPR in the 2011 report on the topic. "And so it is essential an ectopic pregnancy be terminated as soon as possible. But by giving all fertilized eggs legal rights under the law, that calls into question what kind of methods a doctor can actually use to save a woman's life in a situation like this."

Other issues, like whether a pregnant woman could then legally drive in the carpool lane, or fetuses could inherit property or be counted in census records, have prompted enough opposition to overturn attempts at making personhood law in various states.

But as Right Wing Watch points out, activists haven't given up trying, and Huckabee just gave them the biggest national platform yet.

In a taste of the hazards of such a measure, Purvi Patel, 33, became the first U.S. woman in March charged and convicted under statewide feticide laws in Indiana. Patel had hid her pregnancy from her conservative, religious family. She went to an emergency room bleeding heavily, and was then arrested, NBC News reports. She was sentenced to 30 years in prison, and is appealing her conviction, RH Reality Check reports.

The danger of such cases lies in "the additional fear of arrest [that] may altogether prevent them from seeking critical and necessary physical or mental health care during their pregnancy," Miriam Yeung, Executive Director of National Asian Pacific American Women's Forum, told NBC.