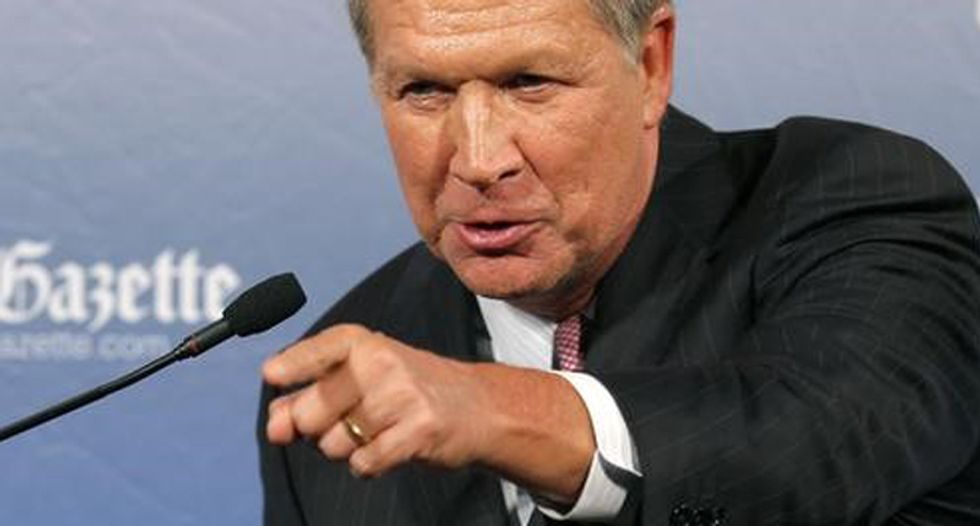 John Kasich wants to take lounges away from teachers. He is just the latest Republican to make an enemy of America’s educators

It’s August, the heat is miserable, kids are going back to school and that means one thing for America’s conservatives: it’s the perfect time to take a cheap shot at the nation’s teachers.

John Kasich, the Republican governor of Ohio – who is generally considered less extreme than Texas Senator Ted Cruz, less dynastic than former Florida Governor Jeb Bush and less crazy than professional troll Donald Trump – recently said : “If I were, not president, if I were king in America, I would abolish all teachers’ lounges where they sit together and worry about ‘woe is us’.”

Kasich addressed a New Hampshire “education summit” sponsored by the 74 Million , an education “news site” which Huffington Post points out is run by failed CNN host Campbell Brown “despite having little to no training in education, and never having taught students herself.” Many other Republican presidential hopefuls, including Governors Bush, Scott Walker of Wisconsin, Bobby Jindal of Louisiana and Chris Christie of New Jersey, addressed the gathering.

Republicans love to hate teachers and imply that all the ills of US society are the result of their laziness. If only schools could be turned over to market forces and not held back by greedy teacher unions, conservative logic goes, everything would be fine – even though charter schools perform no better than traditional schools. Trying to bust unions in general (and those of teachers in particular) turns conservatives on as much as trying to deny climate change , defend the NRA , defund Planned Parenthood or battle for a check from the Koch brothers.

But trying to deny teachers a place to rest for a few minutes between classes, as Kasich is fantasizing about, is ludicrous. What’s wrong with having a place to eat a snack between classes or talk to other teachers about lesson plans and their common students without 30 children within ear shot?

According to Politico’s analysis of Kasich’s 45 minute conversation with Brown, the Republican hopeful wants to remove teachers’ lounges to keep educators from complaining to one another and, presumably, to keep them from colluding in greed to protect their benefits and working conditions. Imagine the possibilities. Without a place to meet, teachers – who already work alone in most classrooms – could be even more isolated. Sure, they’d be unable to exchange teaching techniques or ideas for improvement, but they’d also be working with more alienation.

Politico notes that Randi Weingarten, president of the American Federation of Teachers (which has already endorsed Hillary Clinton ), asked Kasich on Twitter : “after u get rid of places teachers eat lunch, what’s next -getting rid of teachers’ chairs so they stand all day?”

But this has already happened long ago at least at one non-unionized charter school I know. Years ago, I reported about the Imagine Me Leadership Charter School in Brooklyn – a publicly funded, privately managed school housed in a church complex in Brooklyn – where teachers were not allowed to have desks in their rooms.

As the principal told me in 2011: “We believe teachers need to be on their feet, working with the kids.” Every minute of every day. So forget the lounges: sitting has become stigmatized for teachers, even at a desk. The idea that a teacher might need to sit – say, to grade a paper, write down attendance or give their feet a moment’s rest during a long day – was recast as a potential cause for poor student performance.

Republicans have always hated teachers’ unions for obvious reasons. They reliably support the Democratic party , even though Democrats routinely go to war against teachers as well, particularly alumni from the Obama administration . Teachers’ unions are made up of groups Republicans always love to bash: government workers with lady parts . Often, when school closure fights happen between unions and austerity politicians, it is black teachers who are the most likely to lose their jobs.

So teacher unions and Republicans are natural enemies. Indeed, all year Republican presidential hopefuls have gleefully slashed education budgets, with Walker eroding tenure and some $250m from public colleges in Wisconsin and Jindal cutting $300m from Louisiana’s state college system.

Cutting teachers’ lounges would have the “benefit” of saving a little money - another classroom could go in that wasteful space, Kasich might argue. But more importantly, it could deplete camaraderie and morale for instructors at the same time. That’s what Republicans would call a win-win.

Still, the rhetoric about their hatred of teachers is getting more violent, heated and punitive. Christie, who has been yelling at teachers for a while, recently said teachers unions deserved a “political punch in the face” for being the “single most destructive force” in education.

The real “most destructive force” in American education right now is not teachers. It is the fact that many of the top contenders for the country’s highest office, running in one of the nation’s two major political parties, are against science , against immigrants , against women - and against supporting the workforce which teaches our children.