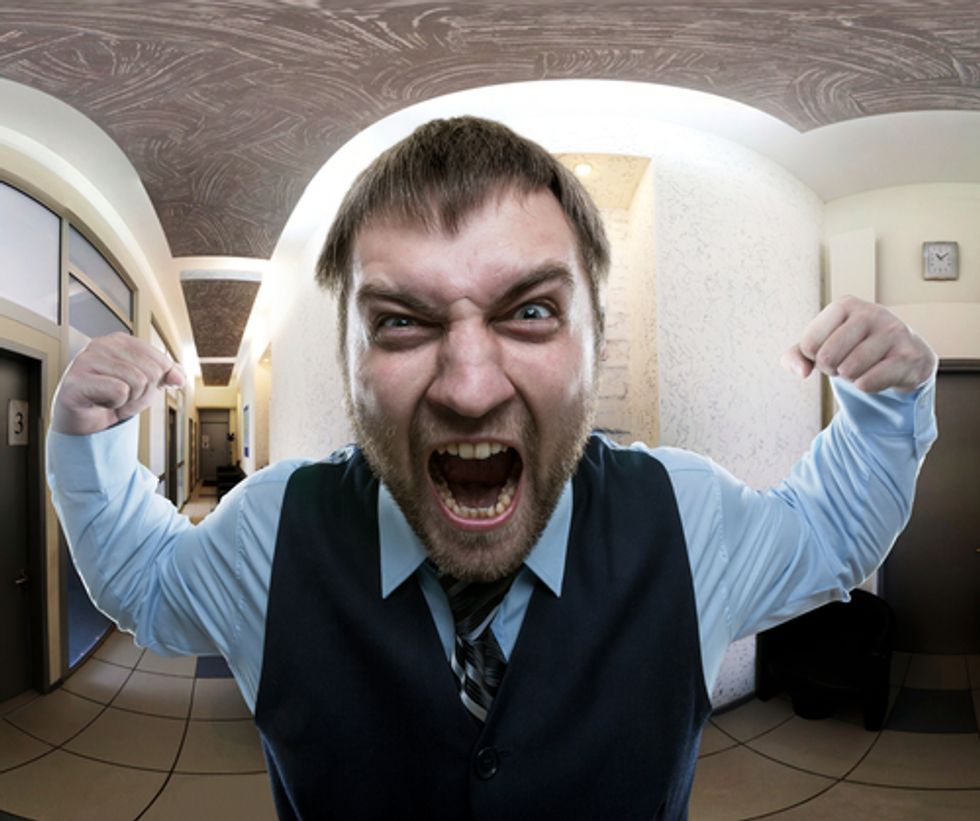 In 2012, journalist Helen Lewis formulated Lewis's Law: "Comments on any article about feminism justify feminism." She was referring, of course, to the way that any article, especially written by a woman, that posits that sexism is a thing that is real will immediately attract dozens of angry men whose efforts to deny this are belied by their own screaming, out-of-control sexism.

I was reminded of this rule by what's happening to historian Rick Perlstein right now. Perlstein wrote a piece, using reporting he did for his book The Invisible Bridge: The Fall of Nixon and the Rise of Reagan, laying out the case that the POW/MIA flag is, like the Confederate flag, a symbol for racist historical revisionists who want to paint the bad guys in famous conflicts like victims and heroes. In this case, it was about American right wingers using the myth that there were a bunch of still-captive POWs in Vietnam as cover for their real mission, which was rewriting the history of how that whole debacle went down. A sample:

[The flag and its accompanying propaganda blitz] memorializes Americans as the preeminent victims of the Vietnam War, a notion seared into the nation’s visual unconscious by the Oscar-nominated 1978 film The Deer Hunter, which depicts acts of sadism, which were documented to have been carried out by our South Vietnamese allies, as acts committed by our North Vietnamese enemies, including the famous scene pictured on The Deer Hunter poster: a pistol pointed at the American prisoner’s head at exactly the same angle of the gun in the famous photograph of the summary execution in the middle of the street of an alleged Communist spy by a South Vietnamese official.

If you've ever seen people flying that flag and wondered what that is all about, Perlstein's piece---and his book---is a must-read. I remember when I first saw those flags in the 90s, when they were undergoing something of a resurgence. I kept thinking, "If there really were POWs left in Vietnam, surely they're dead now, two decades later." Now that it's been 40 years, it's impossible to believe that anyone flies this flag because they are holding out hope of bringing our boys home.

Perlstein's explanation of what this is about helps make sense of this. It was never about bringing POWs home, and there's really no reason to think that the men that Nixon classified as "MIA" were ever being held secretly as POWs by North Vietnam after the official end of the war. The sad truth is that most, probably all, of them died during the war, and their bodies were simply never found. As with most conspiracy theories and urban legends, it's less about literal truth and more about conveying ideologies, in this case in no small part because admitting literal truths is fatal the ideological belief that America's involvement in Vietnam was justified.

Which is where we come to Lewis's Law. If you had any lingering doubt that the POW/MIA flag is anything but a signifier of belligerent nationalism, the reaction to Perlstein's piece should wipe that out for you. His Facebook page is being trashed by haters, most of whom are spewing on random threads that have nothing to do with the topic at hand. I took some screenshots. 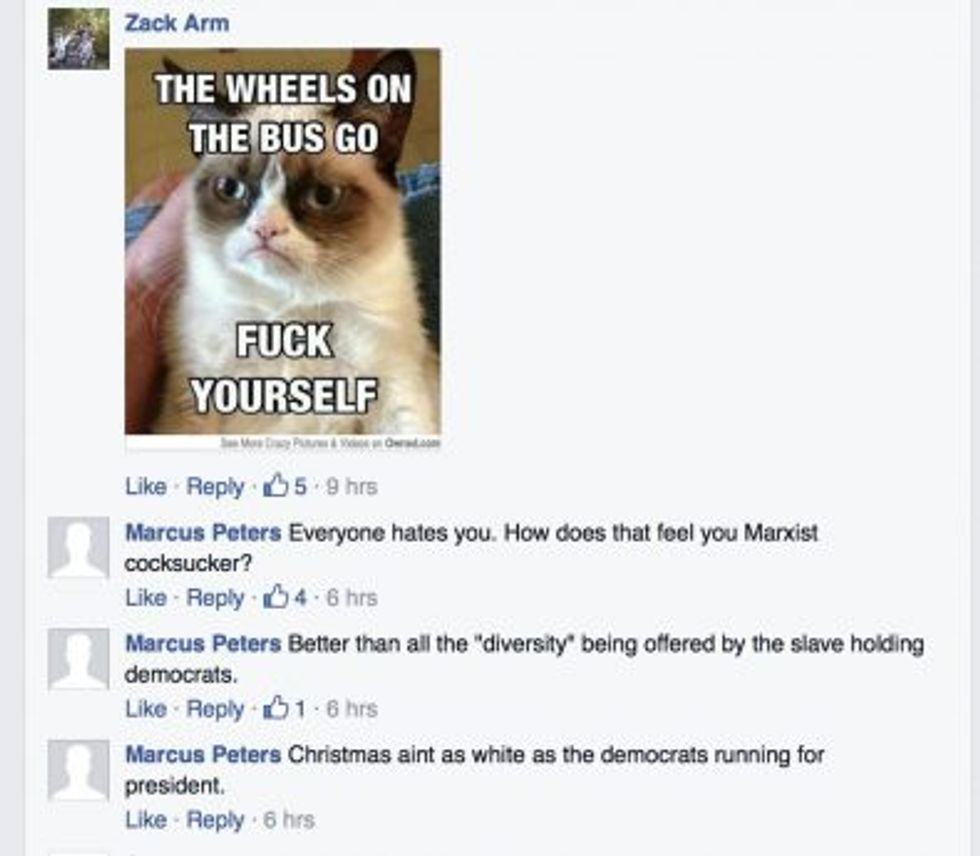 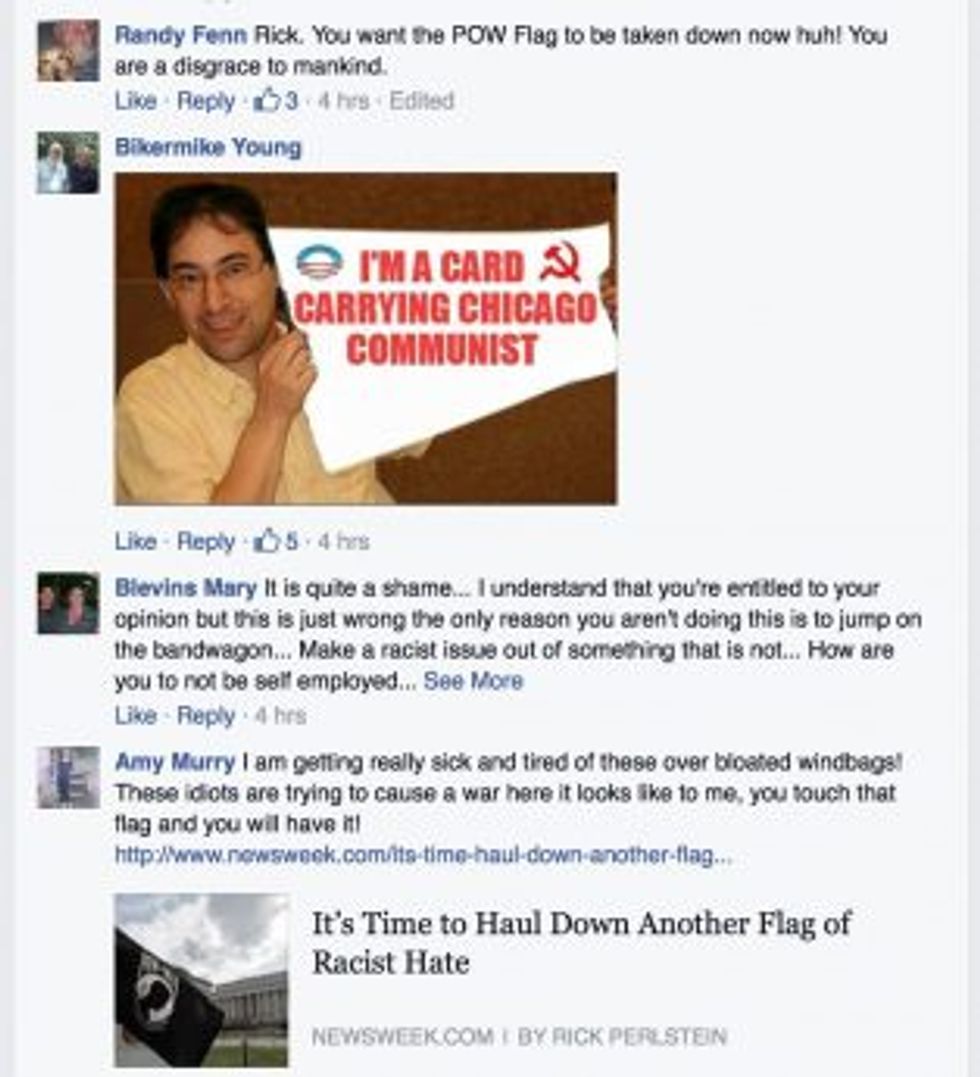 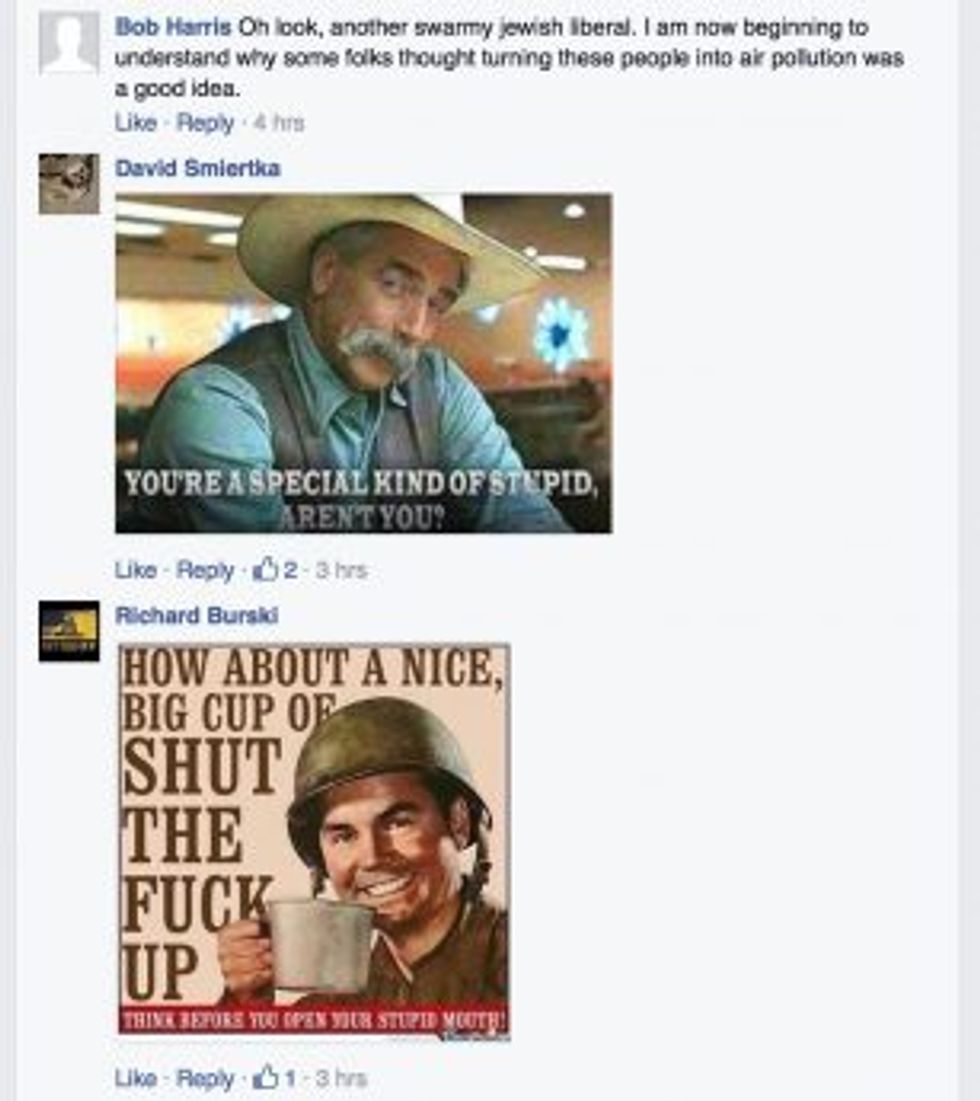 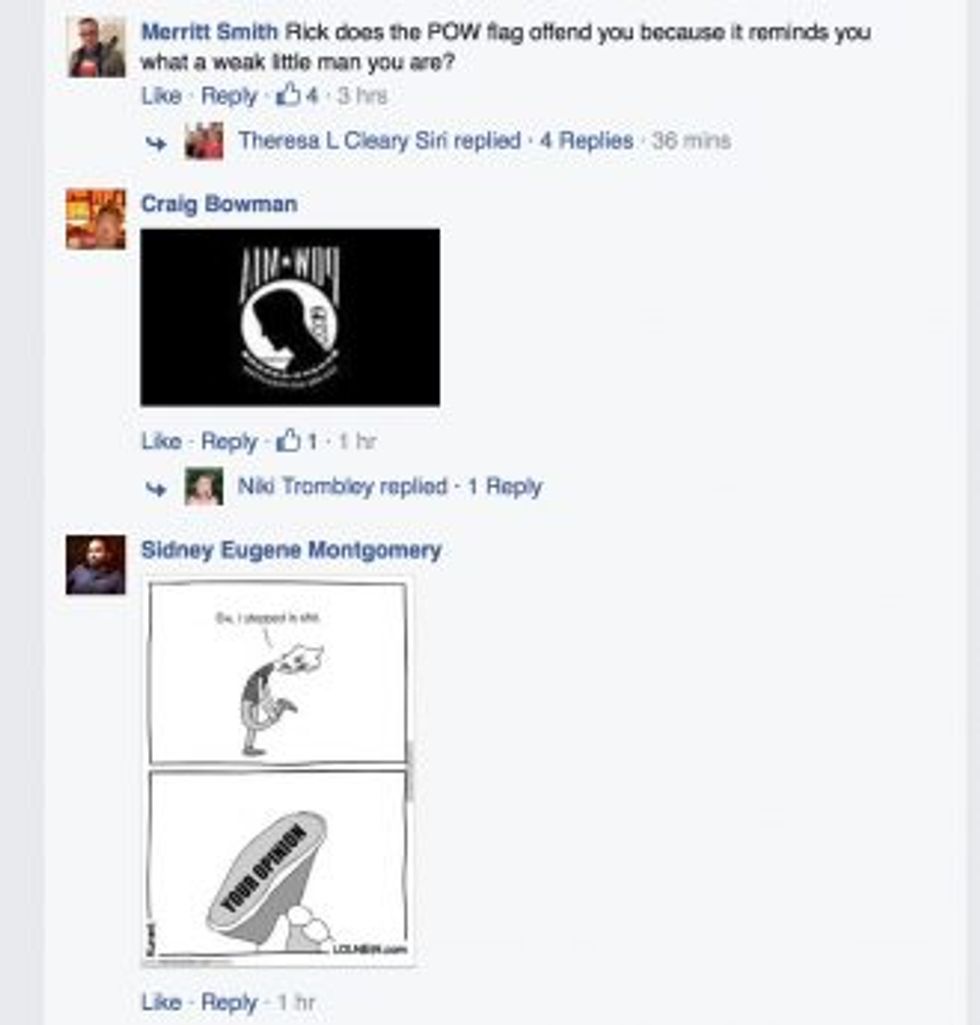 There's something particularly poignant about the accusations of stupidity, coming as they do from people who think the best way to prove they aren't a bunch of bigoted right wing blowhards is to act like a bunch of bigoted right wing blowhards. A glimmer of pity for those so tragically un-self-aware sparkles in my heart, and then is killed off immediately by remembering that these people are assholes.

I consider Rick a friend, but more than that, he's a great historian and his books are fun to read. Yes, they are notorious doorstoppers, but that's because he has a real eye for detail and really knows how to convey the spirit of the eras he's writing about by including all this cultural context that really helps bring his stories alive. A lot of people can write dry histories about what happened, but Perlstein is great at giving you an idea why.

So, I'd like to ask people to support him during this trying time by checking out his books. I got The Invisible Bridge on both Kindle and Audible, so I could switch back and forth between reading and listening without losing my spot. Recommended!