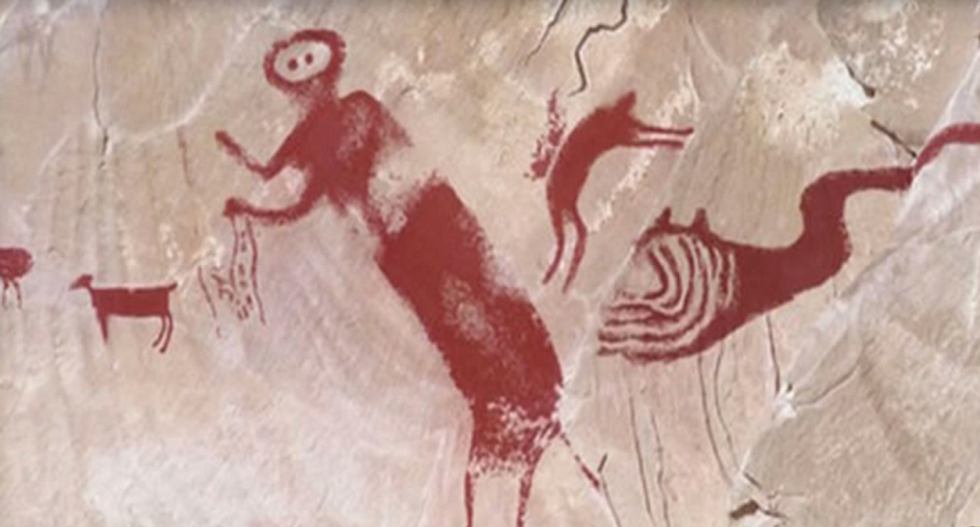 An ancient cave painting by Native Americans in Utah was celebrated by "Young Earth" creationists, who believe the planet is less than 10,000 years old, because the 1,000-year old picture looks, at face value, like a winged pterodactyl dinosaur.

But using new technology, scientists have debunked the claim that the picture is proof dinosaurs were living alongside humans 1,000 years ago. Using two techniques, digital photographic enhancement and X-Ray fluorescence, scientists uploaded a photograph of the cave painting into a program that highlights original pigments and removes those added later, Vocativ reports.

The result? The painting is not a pterodactyl. It appears to depict humans, small animals and a snake.

"It is not a single figure. It is not a pterodactyl,"Paul Bahn, a freelance archaeologist and co-lead researcher told LiveScience. "It's a beautiful set of images."

The drawings on the walls of Black Dragon Canyon in Utah have become something of a cause celebre for creationists, who have insisted that the painting depicts a flying dinosaur and proves that the Earth, which is about 4.5 billion years old, was actually created by God a few thousand years ago.

The artists were people belonging to what is now called the Fremont community, a group branched off from the more well-known Anasazi. Not a lot is known about the particular artists but the nature of the painting leads researchers to believe they came from a "shamanistic" origin.

The flying reptiles actually lived between 228 million to 66 million years ago, LiveScience reports. The first humans are believed to have evolved from primates about 200,000 years ago.

Ancient Native American art holds spiritual significance, and can thus be difficult to interpret. Some animals can be magical or mythical in nature.

"Not all animals in Native American art...need to depict real-world creatures," Benjamin Smith, a professor of rock art at the University of Western Australia, told LiveScience. "Some will be supernatural, but none will be dinosaurs."