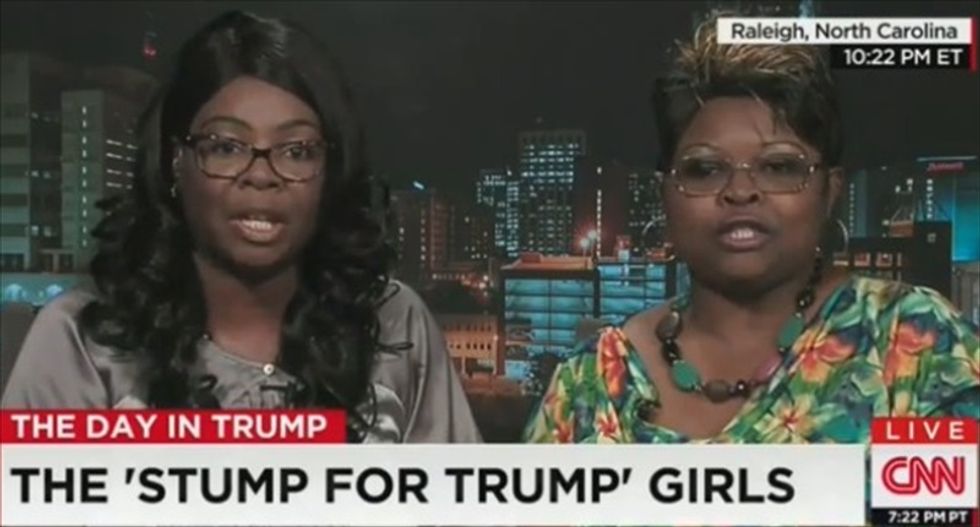 Lynette “Diamond” Hardaway (left) and Rochelle “Silk” Richardson during an interview on CNN on Aug. 11, 2015. [YouTube]

CNN host Don Lemon introduced the country at large on Tuesday to a pair of North Carolina video bloggers who have gained attention within conservative circles for their vocal support for Donald Trump, leading to them being nicknamed the "Stump For Trump Girls."

"We have people going into movie theaters shooting it up, Don," said Lynette "Diamond" Hardaway, who appeared alongside Viewers View co-host Rochelle "Silk" Richardson. "We've got to secure this border. We have to make America great again. and the only way that we can do that is with Donald Trump."

The duo came to the attention of conservative news outlets after posting a video criticizing Fox host Megyn Kelly for pressing Trump regarding his history of sexist comments during last week's GOP candidate debate.

"I don't know why you're gonna make this here a part of your forum [last Thursday]. You know, perhaps you don't need to be hosting debates," Hardaway said in her commentary against Kelly. "Maybe it's time for us to file Kelly and make her go back to reporting news at the local news, try Sesame Street. Maybe you should go back and report news for Sesame Street and have a debate with them."

Newsmax host Ed Berliner called their site "a nugget of common sense" on the Internet, while The Rush Limbaugh Show published a transcript of the video, calling them an "Internet sensation."

Hardaway told Berliner that, while she and her co-host have both voted for Democrats in the past, they would switch to the Republicans if Trump is elected.

At the same time, the duo criticized Texas police officer Brian Encinia last month for his actions in arresting activist Sandra Bland. Bland was found dead three days after the encounter inside a jail cell. Authorities have said that Bland killed herself.

"Even though we know all lives matter, in this case, this black life mattered," Hardaway said. "And this white man ain't gonna get to do that to this black girl."

Hardaway and Richardson have also defended comedian Bill Cosby after numerous allegations of rape against him, and supported activist Bree Newsome for taking down a Confederate battle flag by hand from outside the South Carolina state Capitol.

Hardaway also criticized the Supreme Court this past June, accusing it of emphasizing marriage equality instead of black equality when it ruled that bans against same-sex marriage were unconstitutional.

"If you wanted to push an issue, what you should have been pushing is changing this damn justice system, because this whole damn system is flawed," she said. "If you want to push something, how about pushing releasing some of these black African-American men that's locked up in jail for selling weed and marijuana? Because they weren't doing nothing but the same thing that these white people are doing every week on TV in Colorado selling weed, and they're doing it on national TV. You all hadn't busted them, you hadn't arrested them, but you got our men locked up."

The show's page has also featured examples of transphobic posts, such as an image featuring a disparaging comparison between Michael Jackson and Caitlyn Jenner, as seen below: 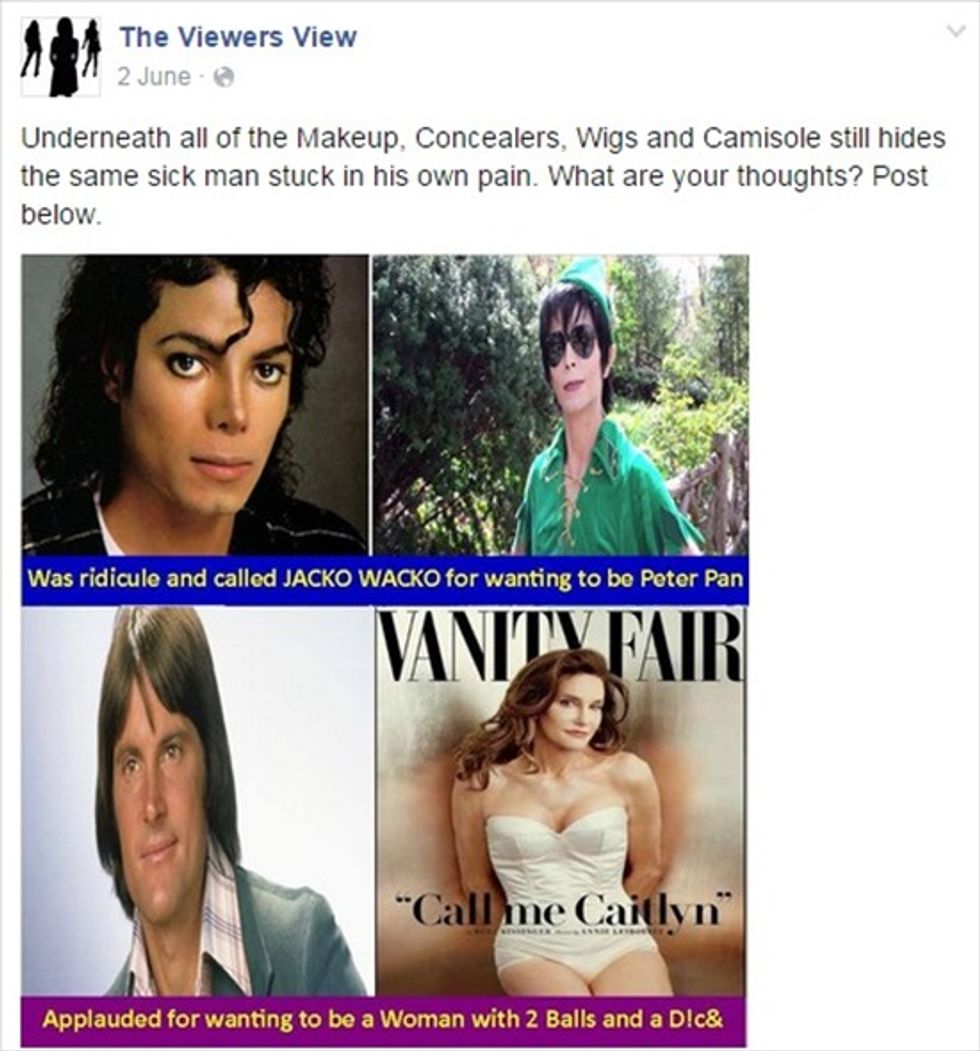 In another post, they also express skepticism regarding Jacob Lemay, a 5-year-old trans boy who was allowed by his parents to express his gender identity. The article featured in the post contains statements by a Brown University professor indicating that these types of decisions can benefit children in Jacob's situation.

However, the hosts ask, "How in the hell is the parents going to be able to explain how boys have virginals [sic] and bleeds from it every 28 days? This child is 5 years old and is suppose to be morally guided by her parents. This is like her walking up to her parents and saying, "mom and dad I'm a puppy." Do this means that the parent is suppose to say o.k., go buy her a outside dog house and transform her into a dog???"

A screenshot of the post can be seen below: 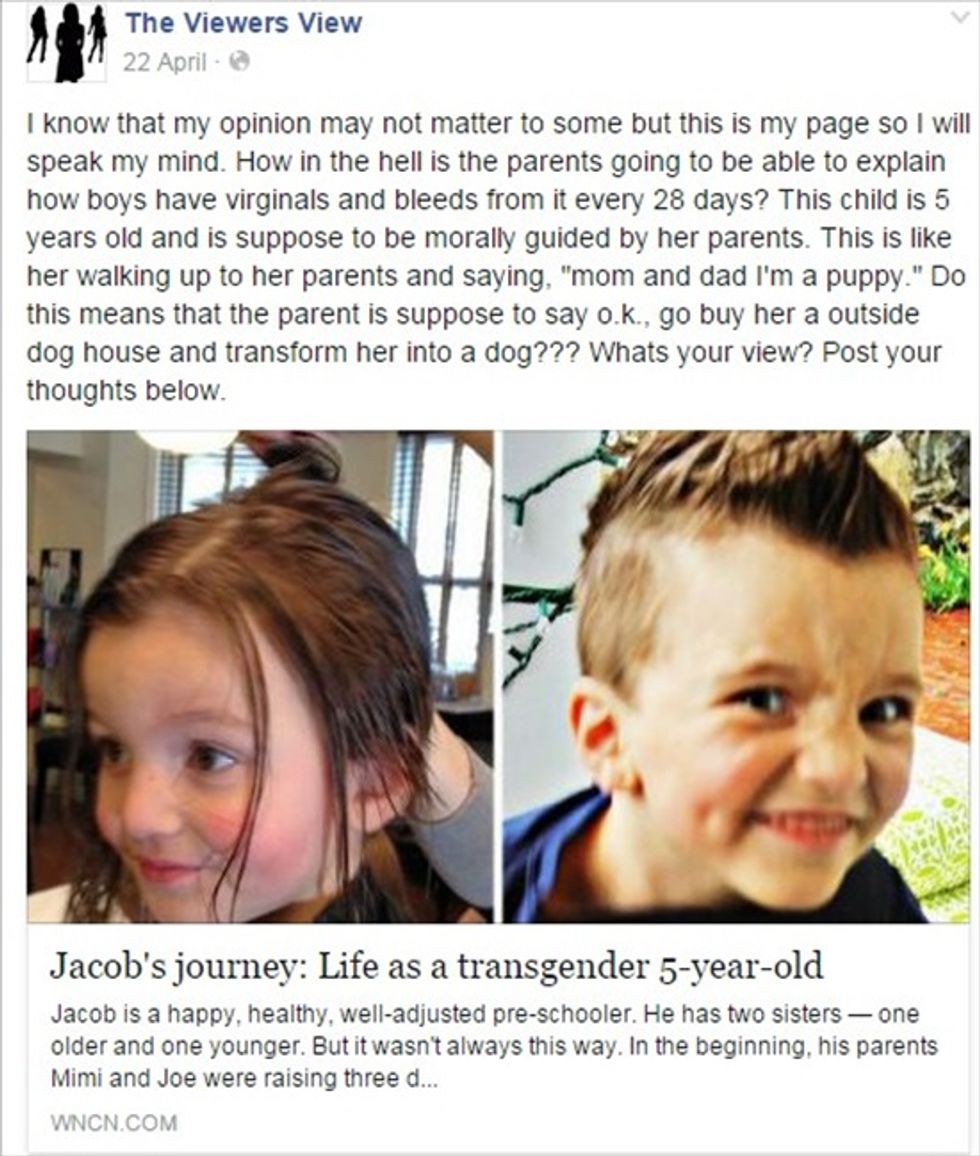 Watch Lemon interview Richardson and Hardaway, as posted online, below.