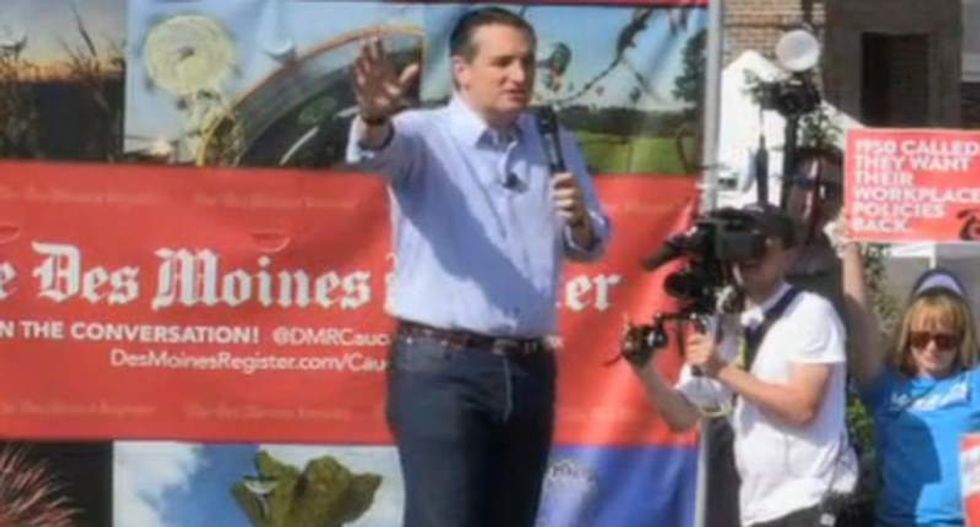 Besides arguing with actress Ellen Page on Friday, Texas Sen. Ted Cruz attacked former President Jimmy Carter and his administration by name a day after Carter announced that he is dealing with brain cancer.

Footage posted by MSNBC shows the Republican presidential candidate telling Iowa State Fair attendees, "I think the parallels between this administration and the Carter administration are uncanny. Same failed domestic policy, same misery, stagnation and malaise, same feckless and naive foreign policy. In fact, the exact same countries, Russia and Iran, openly laughing at and mocking the president of the United States."

The speech also came after Cruz said on Twitter that his "thoughts and prayers" were with Carter, who announced on Thursday that the disease had spread from his liver to his brain. As the Los Angeles Times reported, Carter mentioned during the announcement that he wished he had sent "one more helicopter" to rescue US hostages from Iran in 1980.

"We would have rescued them, and I would have been reelected," Carter said.

For his part, Cruz defended his remarks -- however, the Dallas Morning News noted, he did not repeat his well-wishes toward Carter while doing so.

"What I commented on was the public policy of the Carter administration in the 1970s, and it didn't work," Cruz said. "Millions of people hurt and as a result it sparked a grassroots movement to turn this country around. The same thing is happening because we’re seeing the same failed public policy."

Watch Cruz's remarks, as posted on Friday, below.