The king of all earthquakes: Here's why California is right to be terrified by the 'Big One' 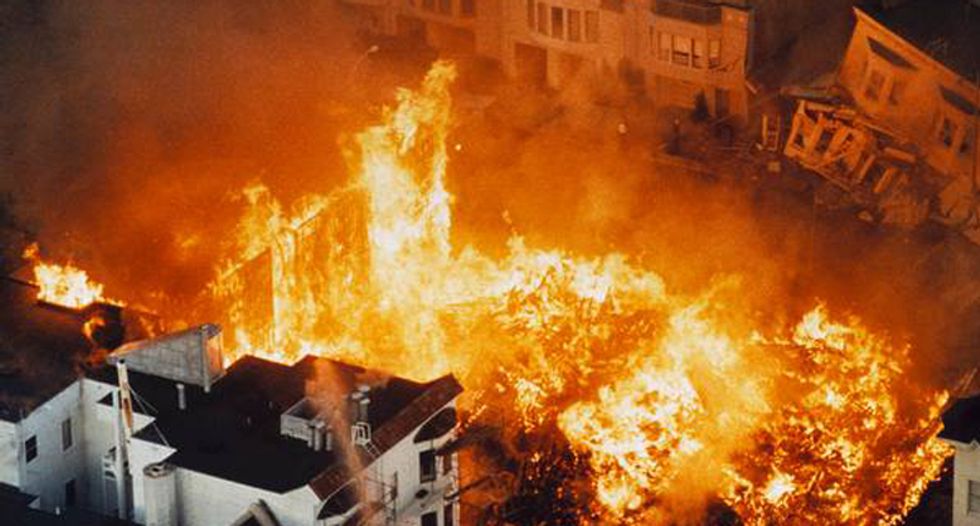 On Monday morning, residents of the Bay Area in northern California felt a brief, explosive earthquake.

According to CNBC, the U.S. Geological Survey reported that the quake was a 4.0 on the Richter scale. Its epicenter was located about one mile north of Piedmont, California at 6:49 a.m. local time.

People close to the epicenter said that the quake felt more like a punch than a shaking sensation. One resident told Raw Story that they thought a vehicle had struck their building at first.

A weatherman who felt the shaking remarked on air that this temblor was "a good one."

Scientists can't say when the so-called "Big One" -- an earthquake that scientists believe will devastate the state of California and the region -- will come, but a group of researchers issued a report earlier this year describing what will happen when the massive San Andreas fault does shift.

Smithsonian magazine featured a report on The ShakeOut Scenario, a collaboration between seismologists, engineers, social scientists and other earthquake experts which attempts to predict exactly how the "Big One" will unfold.

"Our goal in the ShakeOut Scenario is to identify the physical, social and economic consequences of a major earthquake in southern California and in so doing, enable the users of our results to identify what they can change now—before the earthquake—to avoid catastrophic impact after the inevitable earthquake occurs," said the report abstract.

U.S. Geological Survey geophysicist Tom Brocher told Discovery.com, "What we know for sure is that the Hayward Fault is capable of producing a major quake at any time. xBut there isn't any scientifically accepted basis for predicting earthquakes, so we don't know when that quake will happen."

The Hayward Fault is a 74-mile line that runs along that base of the hills on the eastern side of San Francisco Bay. Those faults alone could generate enough destructive force to level the city of San Francisco.

However, Southern California, say scientists, is much more overdue for a powerful temblor.

“We think Southern California is locked and loaded, that the stresses have really built up, and when things start unleashing, they could unleash for years,” said U.S. Geological Survey seismologist Ned Field to Smithsonian.

California sits atop two massive, constantly-moving tectonic plates, the Pacific Plate and the North American Plate. As a result, the state is zigzagged with fault lines, the other most potentially troublesome of which is the San Andreas fault.

It was a quake from the northern San Andreas fault that flattened San Francisco in 1906. The southern fault has not erupted in centuries and some geologists say it's long overdue.

The ShakeOut Scenario team examined the hypothetical effects of a 7.8 quake that would have stricken the Coachella Valley at 10 a.m. on November 13, 2008. Temblors and aftershocks would crisscross the state, toppling older buildings, severing power and phone lines and disrupting water service to millions.

"Hundreds of fires start," wrote Smithsonian's Sarah Zielinski, "and with roads blocked and the water system damaged, emergency personnel aren’t be able to put them all out. Smaller fires merge into larger ones, taking out whole sections of Los Angeles. The lines that bring water, electricity and gas to Los Angeles all cross the San Andreas fault—they break during the quake and won’t be fixed for months. Though most modern buildings survive the shaking, many are rendered structurally unusable. Aftershocks shake the state in the following days, continuing the destruction."

USGS seismologist Lucy Jones said that this is something of a conservative estimate. If the quake were to come during the westerly Santa Ana winds, the resulting brushfires would devastate the area. Currently, she noted, California's reservoirs are low due to a years-long drought. Even if water could be transported to the site of the blazing fires, she said, there wouldn't be enough.

Such a quake would cause an estimated $200 billion of damage, injure around 50,000 people and kill approximately 2,000.

Jones said “it’s not so much about dying in the earthquake. It’s about being miserable after the earthquake and people giving up on Southern California.”

A complete lack of services for up to a year or more, Jones said, could lead to a mass population exodus away from the earthquake zone, further gutting an already damaged economy.

Jones has been working with L.A. city officials over the last year in an attempt to shore up local infrastructure ahead of the big quakes, whenever they come.

The region is also conducting statewide ShakeOut drills. The next is on October 15.