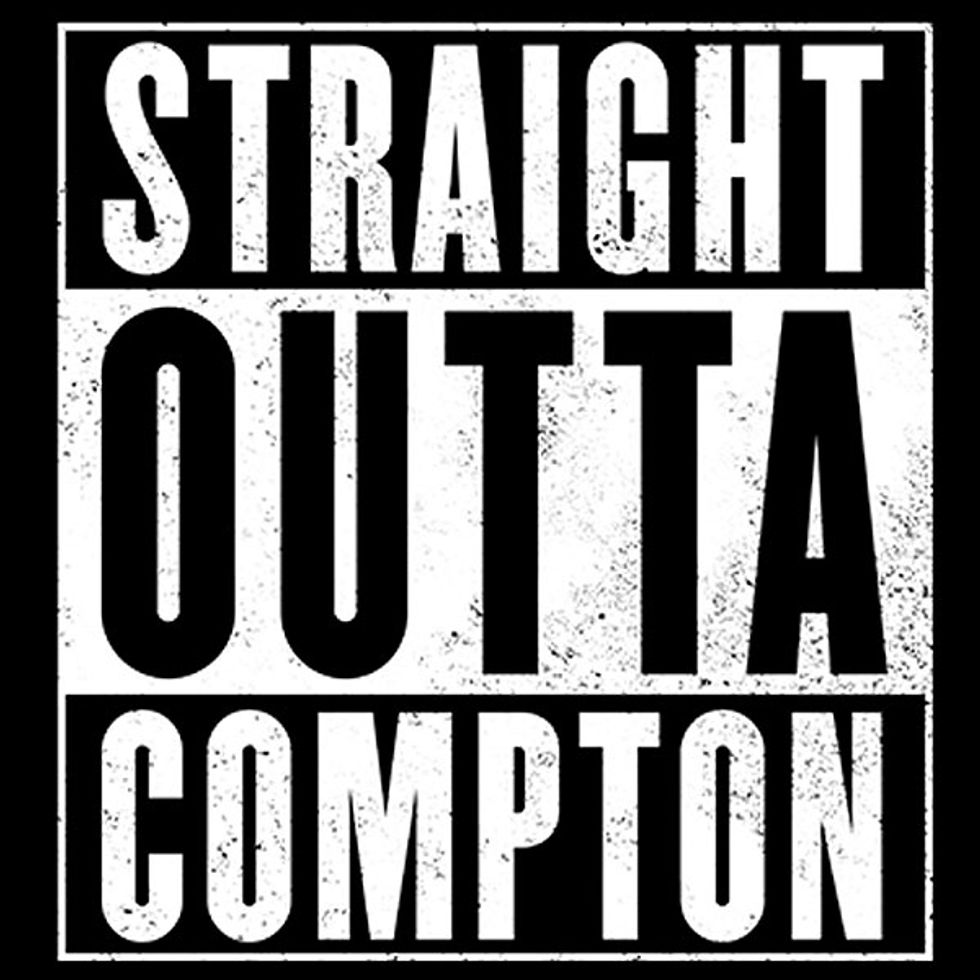 The biopic Straight Outta Compton has come out, and a bunch of I'm-not-a-racist-but types were, you know, worried about it somehow causing violence. Rumors that theaters were hiring security guards abounded and now CNN is surprised to find that, despite all the fears, nothing happened but making money:

CNN host Ashleigh Banfield reported, “Some movie theaters were worried about violence when Straight Outta Compton hit the screen. Instead, it only led to longer lines, ticket lines and some big money, too.”

Banfield brought on CNN law enforcement analyst Cedric Alexander to discuss the reaction to the film. “There are some police organizations that are calling on people — members and maybe even beyond their members — not to see this movie because of the message they think it sends,” said Alexander, who was a police officer in the 1980s when the group’s hits first came out. “We really have to get away from this whole ‘f the police’ to ‘support the police.'”

To which I say, fuck the police and fuck Cedric Alexander in particular. He sounds like a satirical character out of a John Waters movie. I'm surprised he didn't also recommend praying more and remembering that breakfast is the most important meal of the day.

This entire ass-puckering gets all the funnier when you realize this is hardly the first movie that caused a bunch of idiotic white people to lose all common sense in just this way. In 1989, a bunch of white critics decided, and this is so dumb I am embarrassed to write it, that Do The Right Thing was going to somehow cause race riots at the theater. Jason Bailey at the Atlantic recounts:

After the film premiered at the Cannes Film Festival, Lee recalls, "there was this thought that when this film comes out in the summer of 1989, black people are gonna run amuck." In understanding the impact of those original reviews, it's important to remember that this was 1989: a pre-Internet, pre-Ain't It Cool News, pre-Twitter age wherein the initial reports and editorials set the tone and defined the conversation (perhaps disproportionately) that would surround the film throughout those summer months. And that's why it was so provocative for Newsweek's Jack Kroll to ask "in this long hot summer, how will young urban audiences—black and white—react to the film's climactic explosion of interracial violence? ... People are going to argue about this film for a long time. That's fine, as long as things stay on the arguing level. But this movie is dynamite under every seat."

David Denby, currently of The New Yorker, then writing for New York, also predicted a dire outcome. "Do the Right Thing is going to create an uproar," Denby wrote, "in part because [Lee]'s so thoroughly mixed up about what he's saying." He accused Lee of creating "the dramatic structure that primes black people to cheer the explosion as an act of revenge," and concluded, "If an artist has made his choices and settled on a coherent point of view, he shouldn't be held responsible, I believe, if parts of his audience misunderstand him. He should be free to be 'dangerous.' But Lee hasn't worked coherently. The end of this movie a shambles, and if some audiences go wild, he's partly responsible."

As Bailey points out, Denby had no idea what he was talking about. It's obvious that Denby was so caught up in his own racist fantasies that he had no space left to actually pay attention to what's onscreen. Or perhaps it's that he was so sure that a black man couldn't write a literary story that he failed to see what was in front of him. Who knows? But it's ridiculous to accuse Lee of incoherence in that movie, which is so straightforward that most people who haven't seen it for years can remember the general plot of it. Nor are the character motivations incoherent. Complex, sure. But not incoherent. The whole point of the movie is that violence is both a moral failing on the part of the person who enacts it and caused by larger systems. The fact that Lee asks you to see people who make bad choices as people isn't incoherent. The fact that we are all human and we all fail ourselves at times isn't a particularly strange or novel observation. What elevates Do The Right Thing is that it clearly lays out how our systems set people up to fail. The movie frustrates you on purpose, setting up situations where you can see the path away from violence, but you also see how that path ends up not being taken. You are meant to ask hard questions about why we don't move away from violence, but towards it.

In other words, the movie is a profound protest against violence, just one that runs deeper than facile slogans and asks hard questions about the causes of violence. The fact that there were so many white critics who somehow managed to see it as a call to violence says a lot more about them than it does about Spike Lee or the audiences for that movie, that's for sure.

I haven't seen Straight Outta Compton. But, as the history of Do The Right Thing suggests, the racist fears that are bubbling up have nothing to do with the content of the movie anyway.

No doubt the objection here is that NWA and all the gangsta rap that spun off it glorifies violence, whereas Do The Right Thing and Public Enemy's music did not. To that, I would point out that the people who are freaking out do not understand that distinction because their own prejudices are blurring their vision. But also, there's never been a direct line between media that glorifies violence and audiences acting out violence. Most people take violent fantasies, whether it's Westerns or Rambo or the Marvel movies or Dr. Dre songs, as fantasies and not as some kind of blueprint for living. On the flip side, a lot of people fail to see that some violent materials (Game of Thrones comes to mind) exist not to glorify violence but to condemn it.

Shit is complicated, is what I'm saying. Violent material is rarely a call to violence, but usually using violence as a medium to convey other ideas. Sometimes those ideas are gross, such as all the ugly violence against women that crops up in Dr. Dre and Eminem's stuff. Sometimes they are much more understandable, such as the legitimate concerns that create the rebellious energy of "Fuck Tha Police".

But either way, knowing the history of this stuff matters. It shows that "fears of violence" is actually a stand-in for "fear of having to confront some of the uglier facets of our society". It's not about legitimate fears at all, so much as about trying to deflect discussion of police violence, a discussion that was a hot topic in 1989 and is again on 2015.