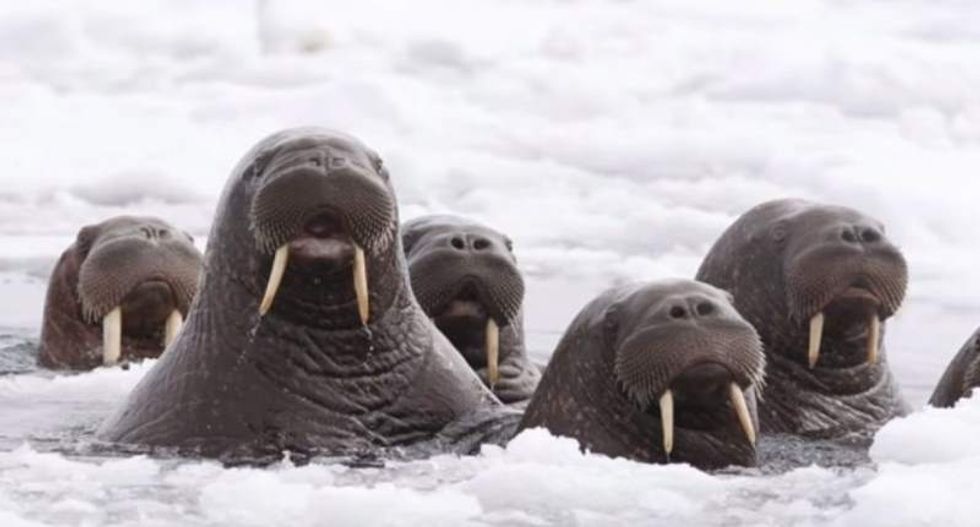 The extreme loss of Arctic sea ice due to climate change is forcing thousands of walruses to crowd ashore on a remote barrier island off Alaska, and threatening their survival.

Barack Obama will be the first US president to visit the Alaskan Arctic on 31 August on a three-day tour to draw attention to the drastic consequences of climate change for the Arctic, such as warming winters and the rapid retreat of sea ice.

The first reported sighting of animals forced to come ashore in the Chukchi Sea was by a photographer on 23 August, and confirmed by villagers in the remote hamlet of Point Lay late on Thursday, the US Fish and Wildlife Service said.

Such landings, forced by the absence of sea ice on which to rest and feed, put the animals at risk of stampede in the limited space of the barrier island.

The animals are easily spooked by aircraft or onlookers, government scientists warned. Trampling deaths are one of the biggest natural risks.

Sea ice cover in the winter months fell to a new low this year because of climate change and abnormal weather patterns.

Some scientists believe the Arctic could be entirely ice-free in the summer months by the 2030s – with profound effects for local indigenous communities that rely on the ice, as well as wildlife that depend on extreme conditions.

Since 2000, the forced migration of walruses and their young to barrier islands such as Point Lay -- known as a “haul out” -- has become an increasingly regular occurrence, according to US government scientists.

“Many walruses seem to prefer the barrier islands just north of the native village of Point Lay to haul out,” Jim MacCracken, a supervisory wildlife biologist with the fish and wildlife service, said.

Last year, as many as 40,000 animals, mainly females and their young, were forced ashore. It was the biggest known haul-out of its kind in the US Arctic, according to government scientists. The Federal Aviation Authority re-routed flights and bush pilots were told to keep their distance to avoid a stampede.

Agency scientists said about 60 young walruses were killed because of crowding and stampedes.

“Walruses often flee haulouts in response to the sight, sound, or odor of humans or machines. Walruses are particularly sensitive to changes in engine noise and are more likely to stampede off beaches when planes turn or fly low overhead,” Andrea Medeiros, a spokeswoman for the fish and wildlife service, said in an email.

The villagers have been dreading the prospect of a repeat record haul-out – and earlier this month appealed to outsiders to keep away from the area.

“We do not believe that these sorts of visits are in the best interest of the walruses and they do not align with the haul out protection role we have developed and measures we set in place to prevent disturbances,” Leo Ferreira III, the Point Lay tribal president said in a statement distributed by US government agencies.

Gary Braasch, an environmental photographer, said he first spotted the walruses coming ashore on the southern end of the barrier island, about two miles from the hamlet of Point Lay, on the evening of 23 August.

Braasch has spent about a decade photographing evidence of climate change in Alaska, and had been tracking the movement of tagged walruses through the US Geological Survey mapping projects.

“What they looked like by eye was three brown smudges along the beach. They were not visible as individual animals,” he said. But he said the blown-up images revealed large numbers of animals. “Certainly they were in the low thousands at that point.”

Fish and Wildlife Service officials accused Braasch of violating flight safeguards and putting the animals at risk – a charge he rejected. “Several of our biologists looked at the images and noted that it appeared that many animals were on shore and appeared to be agitated and fleeing the area,” Medeiros said. “Harassing walrus is against the law. Operating an aircraft in a manner which results in harassing or disturbing walruses is prohibited by the Marine Mammal Protection Act.”

Braasch said the pilot did not overfly the barrier island, and intentionally flew several hundred feet beyond the Fish and Wildlife flight guidelines to avoid the risk of stampede. He said he took his photograph from more than a mile away. “We were not even close to the limits they set.”

He confirmed the government agency had been in contact about flight concerns.

Watch a report on the walruses going ashore, as aired by Wochit News, below.