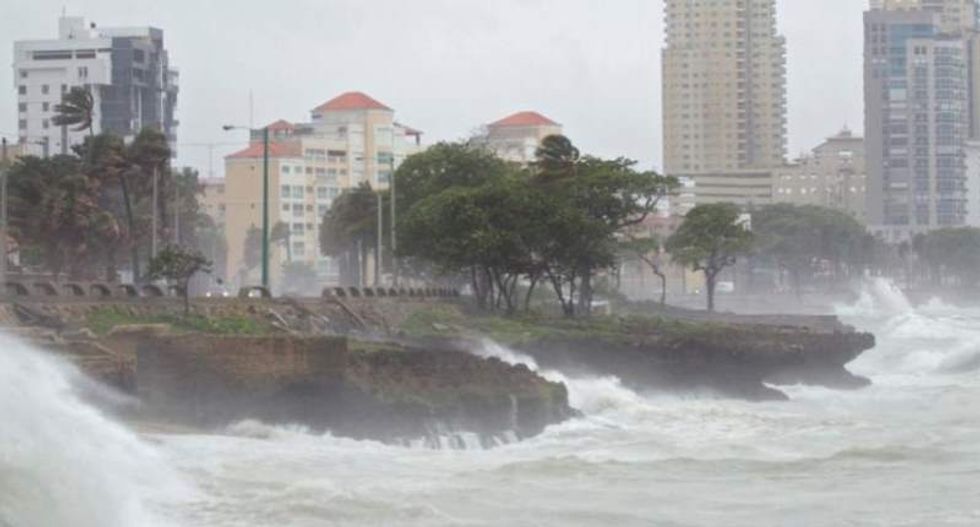 Waves breaking on the seafront in Santo Domingo, Dominican Republic on Aug. 28, 2015. Photo by Erika Santelices for Agence France-Presse.

Tropical Storm Erika left at least 12 people dead when it swept over the island of Dominica on Friday before rolling on to pummel the Dominican Republic and menace Haiti.

While crews rushed to search for survivors and clean up scenes of chaos on Caribbean islands, Haitian authorities issued travel restrictions and the US state of Florida declared a state of emergency.

But forecasters said Friday afternoon that by the time the storm clears Haiti it could be reduced to a tropical depression.

Forecasters expect the southeastern United States to feel Erika's wrath as early as this weekend, after it lashes the island of Hispaniola, which is shared by the Dominican Republic and Haiti, and the north coast of Cuba, which has also issued an alert over the storm.

By that time the storm may be considerably weakened.

"Weakening is forecast during the next 48 hours, and Erika is forecast to weaken to a tropical depression on Saturday," the Miami-based National Hurricane Center said in its latest update.

It added that the storm could dissipate entirely to a low pressure "trough" after its Hispaniola passage.

Haitian officials said aid convoys were on their way throughout the country in preparation for the storm. The country is particularly at risk due to its weakened infrastructure from a 2010 earthquake.

Authorities in Dominica, southeast of the Dominican Republic, surveyed the damage on Friday.

"I can confirm 12 but the number may be higher," Dominican Prime Minister Roosevelt Skerrit said about the death toll, in a tweet posted on his way to the hard-hit village of Petite Savanne.

Local media, however, put the death toll much higher.

According to news site TheDominican.net, 27 people were reported dead in Petite Savanne alone after a "massive mudslide" demolished several houses.

Shaky aerial footage of Petite Savanne posted by Skerrit on Facebook showed what appeared to be a large river of dark brown mud descending down a foggy hillside.

"Regular access to Petite Savanne is totally cut off. Telecommunications are also not functioning over there," Skerrit tweeted.

Skerrit also posted pictures showing swamped streets and beaches, a debris-filled air field and a road that collapsed, undercut by a torrent of water.

"I am asking residents to come out to help clean the streets, clear ravines and public buildings today," he tweeted.

Word of the death and destruction put the Dominican Republic on edge as it was pummeled by Erika Friday.

As the heart of the storm approached, residents were inundated with heavy rains expected to reach between three and ten inches (7.5 and 25.5 centimeters), the NHC said.

Earlier, Dominican Republic authorities issued a red alert. Schools, beaches and ports were closed and civil protection organizations were ordered to be at the ready.

The Dominican Republic is particularly vulnerable to the impact of tropical storms due to rivers and streams in the capital Santo Domingo and elsewhere.

Haiti, as well as Turks and Caicos and the southeastern and central Bahamas could also see similar rain levels.

"These rains could cause life-threatening flash floods and mudslides," the NHC warned.

In Puerto Rico, Erika left nearly 150,000 people without power, but appeared not to have caused major damage.

The storm's approach also set off a scramble as far north as the US state of Florida, where the governor declared a state of emergency.

"Tropical Storm Erika poses a severe threat to the entire state of Florida and requires that timely precautions are taken to protect the communities, critical infrastructure and general welfare of this state," Governor Rick Scott said.