Trump supporter tells CNN: Immigration plan means more jobs for whites 'and some of the blacks' 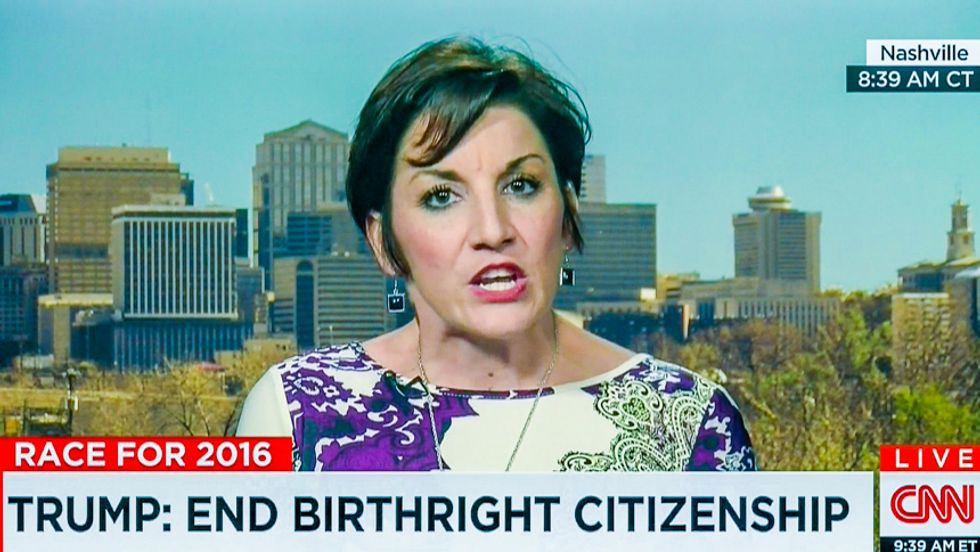 Donald Trump supporter Terra Compton Grant explained to CNN that the GOP presidential candidate's plan to deport up to 20 million undocumented immigrants was a way to provide more jobs for whites "and some of the blacks."

Over the weekend, Trump released details of his plan, which would make Mexico pay for a wall along the southern border, end birthright citizenship, and it would triple the ICE budget to forcefully deport all undocumented immigrants in the country.

On Monday, Grant told CNN host Carol Costello that she agreed with Trump's plan even if it was not clear how he was going to pay for all of it.

"We've got to get a border, we've got to get a wall," Grant insisted. "We have a lot of illegal immigrants that come into this country, they work illegally, they make American money, and then they send it back to Mexico to support their family. So, that money is going back to Mexico. So, the money is there to make that happen."

According to Grant, Trump's heart and mind were "in the right place."

"I really do, I love the plan," she continued. "I love the idea that, hey, let's get some of these illegal immigrants out of the country, let's get them out of here so maybe more whites who have not been able to acquire jobs, maybe they can get into jobs [and] some of the blacks."

Grant added that she had a "good friend" who was deported but Facebook allowed them to stay in touch.

Following Grant's interview, she responded to people on Twitter who were critical of her comments.

"CNN Interview went great," she announced. "For those of you calling me a racist... I have three bi-racial kids. Read the Immigration Policy."