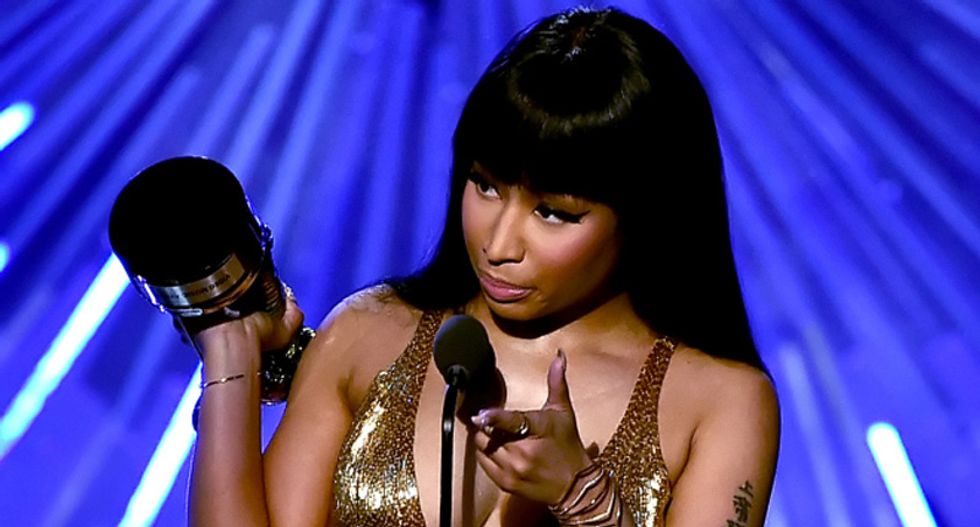 Minaj apparently angered by interview that Cyrus gave in which she called Anaconda star ‘not too kind ... not very polite’

Minaj thanked her pastor while taking the award for her music video Anaconda, then turned to Cyrus, who was on a nearby stage. “And now back to this bitch that had a lot to say about me the other day in the press – Miley, what’s good?” said Minaj .

In an interview last week with the New York Times , Cyrus had accused the rap star of being jealous and said that she had confronted music industry racism the wrong way.

Cyrus responded to the confrontation, with a brief comment about interview responses being twisted from their intended message. “We’re all in the industry, we all do interviews, and we all know how they manipulate shit,” Cyrus said, before continuing with her script for the night.

Cyrus’ comments about Minaj emerged after she was asked what she thought about an argument between Minaj and Taylor Swift, who had taken Minaj’s criticism about racism in the music industry, and specifically the VMAs, personally. Swift later apologized .

“What I read sounded very Nicki Minaj, which, if you know Nicki Minaj is not too kind,” Cyrus said. “It’s not very polite.”

She also said that Minaj’s criticism came from a place of jealousy and that if she wanted to talk about race, she could have done it in different ways.

“I know you can make it seem like, Oh I just don’t understand because I’m a white pop star,” Cyrus said. “I know the statistics. I know what’s going on in the world. But to be honest, I don’t think MTV did that on purpose.”

Minaj had opened the award show and was joined by Taylor Swift while singing her track The Night is Still Young. They then performed the Swift track Bad Blood together, ending the performance with a hug .