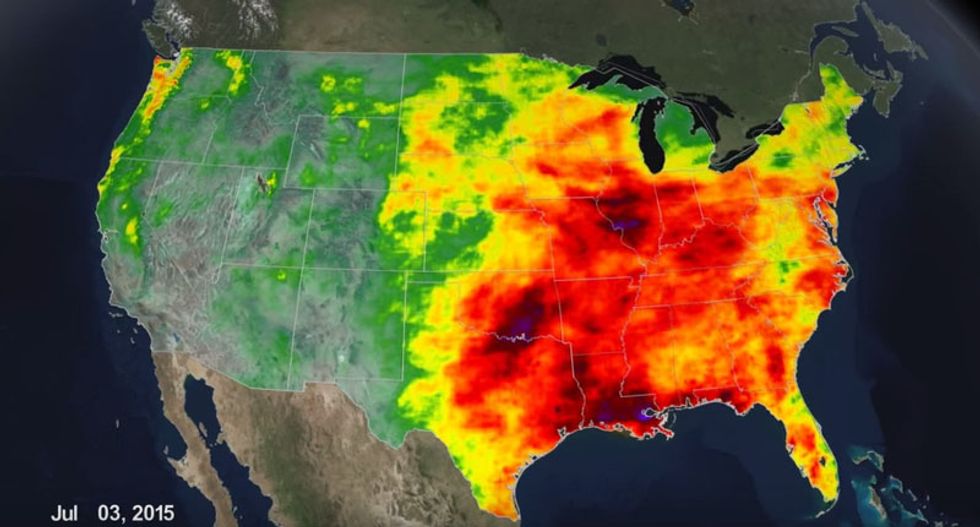 It’s no secret that it has been really wet in the Southeast and really dry out West over the first half of the year. But to really understand the split and how we got here, NASA has a helpful, color recap of the year in rain.

The imagery comes courtesy of the agency’s Global Precipitation Measurement constellation of satellites. In February last year, NASA and the Japan Aerospace Exploration Agency launched the lynchpin of the system — 12 satellites that can sense 13 different types of precipitation, including snow and light rain, the first of its kind to be able to do so from space. In the animation, green indicates lower rainfall totals while red and purple are higher totals, much like you'd expect for a radar image.

All those sensors help paint a clear picture of liquid and frozen precipitation across the U.S. Due to a series of storms in late May, Oklahoma and other parts of the Southeast racked up ridiculous rainfall totals. Those storms provided 200 to 600 percent more May rainfall than normal, set all-time monthly records, and obliterated a drought that had gripped the region for 5 years.

Another blast of rain from Tropical Storm Bill in mid-June brought rainfall totals for the year in excess of 75 inches of rain for parts of the region according to NASA. In comparison, some cities in the region usually receive just 40 inches for the whole year.

That’s the haves. Then there are the have nots. A notable lack of rainfall is the story for California for the fourth year in a row. The state continues to be mired in drought and has seen $2.7 billion agricultural losses. But it isn’t alone as Washington and Oregon have fallen into the same plight.

While it looks like parts of the Cascades have received a fair amount of precipitation, the visualization is missing one key indicator of drought: temperature. And on that front, Washington and Oregon have dealt with particularly high temps, leading to what scientists have termed a “wet drought.” This winter was dry, but not bone dry for the region. But it was the second-warmest winter on record and a good portion of precipitation fell as rain rather than snow.

The lack of snowpack left those states without a critical reserve of water through the dry summer season and led Washington Gov. Jay Inslee to issue an emergency drought declaration in May.

Both Washington and Oregon are completely in some form of drought. While they’re not suffering from as big a deficit as California’s multi-year dry spell, it’s still a cause for concern, particularly as El Niño strengthens. During El Niño years, the Pacific Northwest typically receives less precipitation than usual so another dry winter is looking more likely. That means the Global Precipitation Measurement satellites will likely have to look elsewhere for rain and snow.