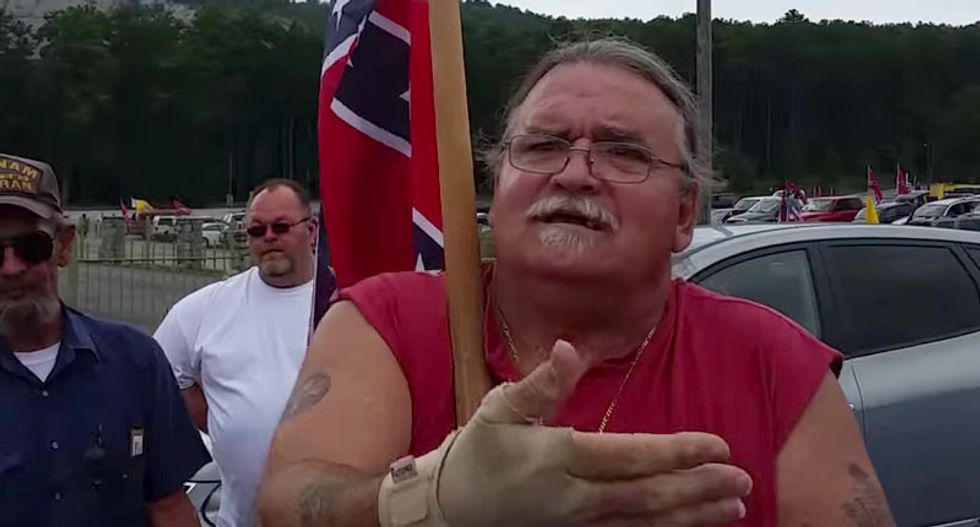 A man with a Ku Klux Klan tattoo and hat was caught wearing FUBU shoes -- an iconic brand associated with hip hop -- at a rally in support of the Confederate flag at Stone Mountain Park in Georgia.

"I just wanted to mention, I didn't know if you were aware, I know you came here with the Ku Klux Klan or whatever," George Chidi of Neon Flag began telling the man, only to be interrupted by the man explaining he came to the Saturday rally as a "southern American."

"The only thing that I wanted to mention is that the shoes that you're wearing," Chidi, a former associated editor at Raw Story, continued in video he uploaded to social media.

"What's the matter with the shoes I'm wearing?" the man interrupted again, saying his shoes sported colors of the KKK's emblem. "They're red and black and white."

"The brand FUBU, it stands for 'For us, by us,'" Chidi explained, noting the clothing company was founded by black entrepreneurs with the intent of empowering the black community.

But the man didn't see the irony. "Them shoes that you probably wore was designed by a white man back in the 1920s," he remarked. "But does that make you stop wearing them shoes because the white man designed them? I don't care if a black man designed my shoes."

The man told Chidi he didn't hate him. He only hated "what your people are doing to this country."