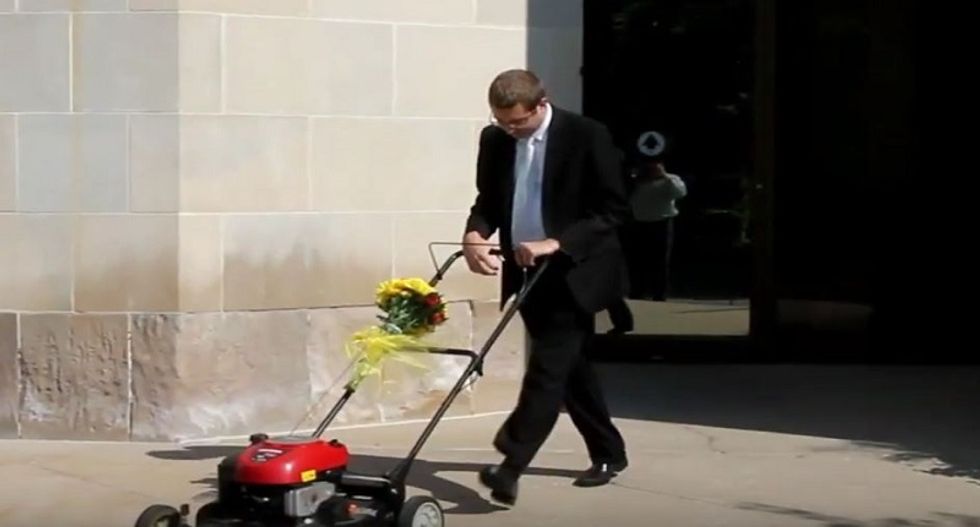 Iowa Starting Line blogger Pat Rynard decided to give it a try. Dressed in a black tuxedo, Rynard brought his lawn mower, adorned with golden blossoms, out of his garage and hauled it over to the Polk County administration building.

"You see, Steve King last week made big news by saying that because of the new Supreme Court ruling on gay marriage, you can also marry all kinds of things, even your lawn mower," Rynard said. "So we're gonna try it out today. I'm very happy about it because I've kept this lady hidden away in my garage for a number of years out of shame. But now we can finally express our true love."

"Okay, the answer to that would be no," she said. "You have to be 18 years old to get a marriage license, and the other party needs to be able to sign a contract, has to have a government ID and has to be able to have a witness that says that they can enter into a contract. So I think on those counts alone, you can't marry your lawnmower."

Complications for Rynard include the fact his lawn mower, at 6 or 7 years old, is too young, and he's already married to a (human) woman.

"So, no marriage with my lawn mower?" he asks before leaving Haggerty's office.

"No marriage because you're married, and no marriage with a lawn mower," she answered. "It's an inanimate object. You cannot marry a lawn mower."

"How about a snow blower," Rynard presses.

Rynard isn't the only one to jump on King's comments. A Facebook page called "Steve King's Lawnmower Dating Club" is asking fans to post photos of themselves and their "intended."

"Let's show Congressman Steve King that Lawnmower/Human relationships are real!" the page exalts. It's asking fans to call in to King's office to express outrage over Rynard being refused a marriage license with his lawn mower.