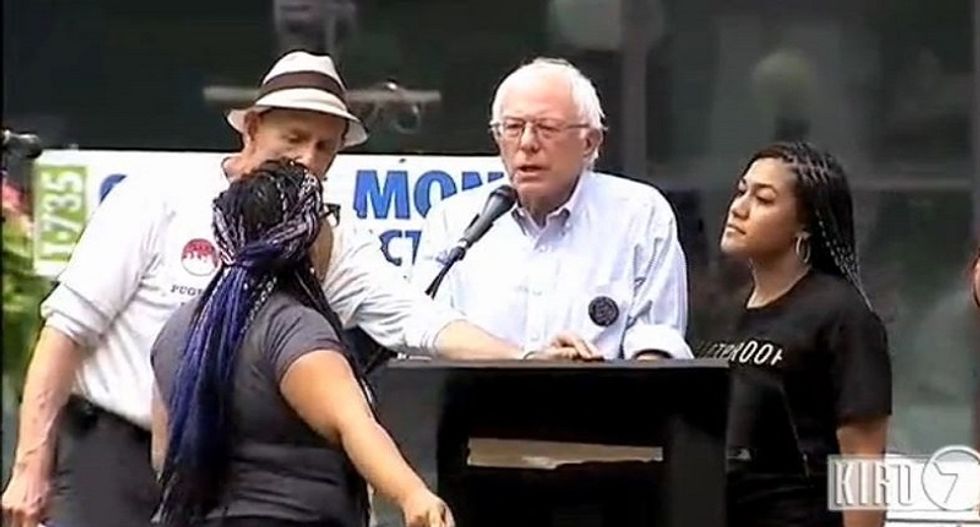 A lot of white progressives have been flummoxed by ‪#‎BlackLivesMatter activists disrupting Sen. Bernie Sanders' events. They point out that Sanders is the most liberal candidate in this race, and wonder why Hillary Clinton and Donald Trump aren't getting the same treatment.

But if one pauses to appreciate some context, this strategy makes a lot of sense.

There are two things that white liberals need to understand about these actions. First, they aren't really about Bernie Sanders. They may have begun that way, and they clearly have something to do with a certain strain of white liberalism, and with some of Sanders' supporters tone-deaf response to the protests. But they're not about Sanders himself, and that renders arguments about his Congressional record, or the fact that he marched on Washington with Dr. King in 1963, moot.

Second, black and white progressives don't share a common collective memory. Their understandings of the grand sweep of American history rightly lead them to very different views of the utility of electoral politics, and of the potential benefit of disruption – of shutting shit down and getting into people's faces.

It's Not Really About Sanders

This conflict began with Bernie Sanders, but has since become more about the way some of Sanders' supporters have responded to the Black Lives Matter movement. And it's not just the sense that white liberals were cheering on these protesters when they shut down Ferguson or Baltimore, only to be outraged when the same tactics were used against one of their own. There's also a widespread perception that black America is facing a severe crisis, and that white liberals should share these activists' sense of urgency but don't.

More to the point, Black Lives Matter activists are leveraging the intense media coverage of a presidential campaign to get their message across. If they protested a right-winger who had an awful record on civil rights, or, to a lesser degree, Hillary Clinton, whose husband's record included welfare “reform” and the 1994 Violent Crime Control Act, it would be a dog-bites-man story.

They're bringing an enormous amount of attention to their cause specifically because they're a movement of the left targeting a candidate who's broadly perceived as a champion of the left. That's man-bites-dog. That gets media coverage.

A small example: Last week, a local NBC affiliate reported that 75 Black Lives Matter activists had shut down a street in Portland for ten minutes. There was no violence, no teargas, no drama, and the street was only blocked very briefly. The story was hooked to Bernie Sanders visiting the city, and without that hook, this small, bloodless action would never have made the news news. It would have been the proverbial tree falling in the woods.

There's also a practical reason to target Sanders. At least so far, his appearances haven't been tightly controlled or heavily policed. So activists have been able to get onto the stage, and into the audience's face. “Activists Escorted Out of Candidate's Speech” isn't much of a story. Failing to get into a speech in the first place isn't a story at all.

If one understands that the goal is to leverage the media frenzy of a presidential campaign in order to be heard, one has to acknowledge that this movement's tactics have been quite successful. As a result of these disruptions, former Maryland Governor Martin O'Malley and Sen. Sanders both put out detailed proposals for addressing systemic racism, and Hillary Clinton will soon have to follow. Republican candidates Ben Carson and Donald Trump were both asked to speak to the issues raised by Black Lives Matter activists on Meet the Press last week. During the August 6 GOP debate, there were no questions about climate change or Wall Street reform or the student debt crisis, but there was a question about Black Lives Matter. You can't argue with success.

But there's a deeper disconnect between the views of white Sanders supporters and Black Lives Matter activists, one born in different perspectives on the potential benefits of electing a candidate with the best policy proposals.

Say you're a liberal-minded white person. You probably have a historical sense that while our system of government is deeply imperfect, it's worked pretty well for average people in the past.

You recall the New Deal, and the longer postwar era known as the “liberal consensus” period. During that 50-year run, prosperity was broadly shared, unions thrived, CEOs were paid only 20 times what their workers make – not 300 -- and the wealthy paid a big chunk of their incomes in taxes. Millions of families purchased homes or started businesses with help from the GI Bill. We built a thriving middle class during that period. Some say it was the first of its kind.

So you probably have a sense that if we could get the electoral politics right — with more and better Democrats really fighting for working people — we might be able to return to those days, or something like them.

Now, say you’re a black person with a similar sense of the larger sweep of history.

In all likelihood, your family was entirely left behind by the New Deal. With some exceptions, blacks were barred from joining that growing middle class by Jim Crow in the South, and in the North by somewhat less blatantly discriminatory public and private policies in housing, employment and education.

Consider an even longer view. You know that while other countries abandoned slavery without bloodshed, it took a civil war to end that institution in the US. At that time, your forebears were promised full citizenship. That promise was codified in the Constitution. And if your great-grandfather or great-great-grandfather lived somewhere where he was allowed to participate in electoral politics, he probably became a loyal Republican because of it.

But in both the North and the South, that central promise was betrayed. In the South, de jure slavery was replaced with de facto slavery through the sharecropping system and prison labor. The North wasn’t much better. There were sunset towns and frequent pogroms. Your ancestors were kept in “their place” by discriminatory laws, lynchings and periodic campaigns of terror.

During the civil rights era, your father, or grandfather — and because women had won the vote by then, your mother or grandmother — probably switched their allegiance to the Democrats. Lyndon Johnson signed the Civil Rights Act and the Voting Rights Act, and with them, you were once again promised full and equal citizenship in the United States, this time by Democrats.

As a result, African-Americans made significant gains. But it took another two decades to dismantle what remained of America's discriminatory legal regime. And those gains were met with white backlash every step of the way. That resistance continues today, with all sorts of new voting restrictions that disproportionately impact blacks.

These activists feel that their community is in a state of emergency. They see their brothers and sisters being gunned down in the streets. Today, they enjoy full citizenship under the law, but where the rubber meets the road, that long campaign of terror isn’t entirely over. The stress of living in America while black shortens African-American lifespans. One in three black men will be thrown into prison during their lifetimes, and one in 15 are sitting in one right now.

And if you're a black person with a sense of history, you may also understand that your community has made its greatest gains when the system faced shocks and disruptions. It took a civil war to pass the Reconstruction Amendments. Boycotts and bloody confrontations with white supremacists preceded those 1960s civil rights laws. The riots of the 1960s led to a host of reforms, and the black liberation movement frightened the white establishment into taking African-American grievances seriously (even if it didn’t do nearly enough to address them).

So different historical experiences lead people to different ideas of what kind of tactics are most likely to be effective. That's natural, and shouldn't be hard to understand.

None of this is offered as a defense of these tactics. Rather, it's an attempt to understand how two movements that inspire a great deal of passion among their respective supporters came to loggerheads, and perhaps how they can work together in the future.

Joshua Holland is a contributor to The Nation, and a writing fellow with the Investigative Fund at The Nation Institute. He is also the host of Politics and Reality Radio. Follow him on Twitter.