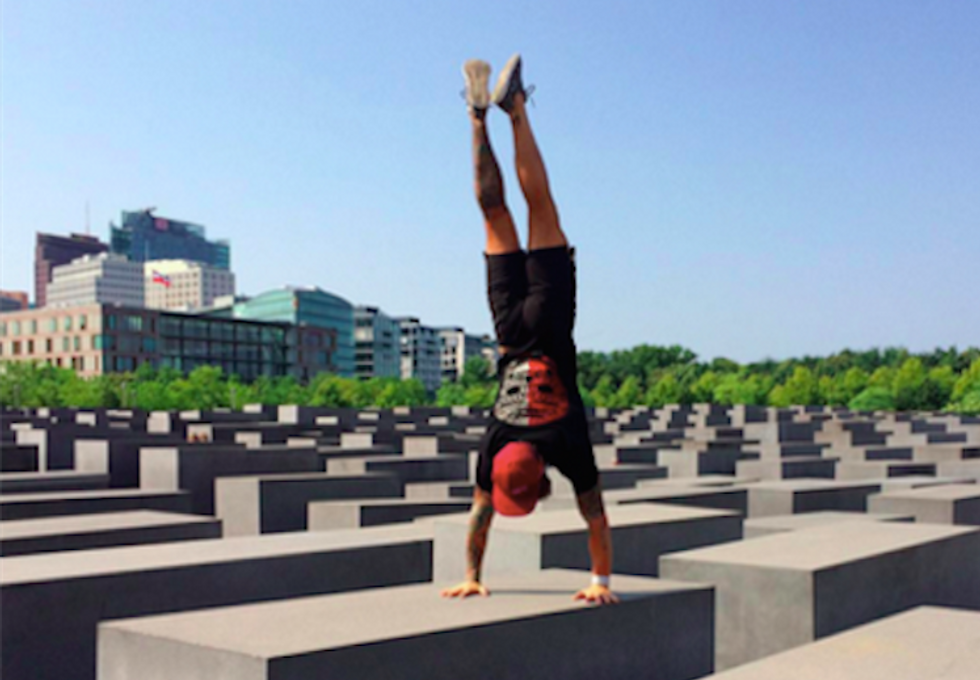 An American athletic trainer who specializes in the Crossfit program has sparked outrage around the world by posting an Instagram photo of himself doing a handstand on a Berlin, Germany memorial to the victims of the Holocaust.

BuzzFeed reported that Globe-trotting Crossfit enthusiast Dave Driskell was on a layover in Berlin when he snapped the photo with the caption "Hello, Berlin, Germany. 15 hour layover. Checking the sites. Drinking the beers. Eating the bratwurst. #vagabond #wanderlustwods #handstands #365daysofhandstands."

One commenter summed up most people's reaction when they wrote, "Mate, that is so insensitive and makes you look really dumb. I would delete this post."

Dreskell did, and on Monday night, he posted an apology.

"I'd like to apologize for any offense the last picture I posted has caused," he said.

"We walked near this memorial not knowing what it was at the time," Driskell explained. "People were walking on the pillars. Kids running around. People sitting on them. It was gorgeous and looked visually stunning. As with all things like this I wanted a picture next to it, as I have been doing for years. I took a handstand picture with it as the background. I truly did not know what the structure was."

"I feel completely terrible as I would never purposely offend or disrespect this memorial had I known," he said.

Although, he did feel the need to assert his bona fides as a good person by writing, "Earlier this year I flew to India to help with a charitable event which raised over $24,000.00 to help the orphans and needy in India. I love to promote fitness and inspire people to do something different than the norm: To be epic. To be fit. To help others. To chase happiness. To show love! I love all and strive to show that through my passions of travel and fitness."

Crossfit is a workout regimen founded on the idea of "muscle confusion," which involves rapid sets of high-intensity lifting, pull-ups, push-ups and other exercises. Some fitness specialists say that "muscle confusion" is scientifically dubious and even dangerous, but adherents to the Crossfit program are known for their cultish devotion to the program.