Young hopefuls in race to be first black African in space 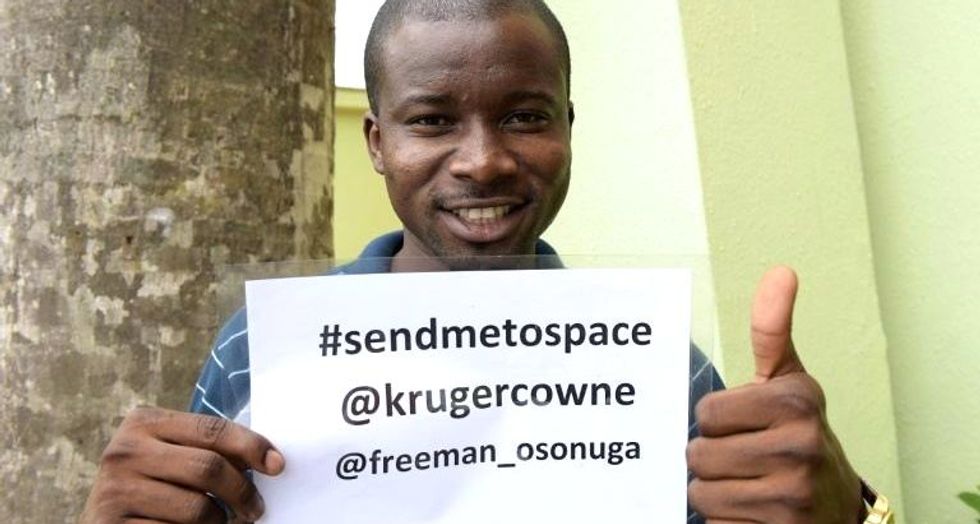 AFP/AFP - Space enthusiast Freeman Osonuga holds a campaign flyer to solicit support for his quest to be selected to be the first black African in space in Lagos on August 21, 2015

In half a century of space travel more than 500 people have glimpsed the Earth from the unique vantage point of the cosmos, yet no black African has been among them.

Now a Nigerian and two South Africans are in a race to become the first after being shortlisted in a global talent search to send a "young icon of the future" into the heavens.

The winner will undergo intense training, experiencing extreme G-forces and weightlessness before taking off in American developer XCOR's Lynx spacecraft, on a voyage loosely envisaged for next year.

Among the three is Freeman Osonuga, who is competing with 30 hopefuls shortlisted for the Rising Star Programme run by talent agency Kruger Cowne and the One Young World charity, both based in London.

"It feels great, being on the verge of making history. And to be in a position to inspire a generation and the continent," said Osonuga, a doctor at a teaching hospital in Lagos, Nigeria's largest city.

"It would be a rare opportunity to be a beacon of hope to the continent, that truly we can literally reach for the stars and fulfil our potential."

Osonuga, who grew up in poverty in the southeastern state of Ogun, the youngest of six children, is no stranger to risk.

The 30-year-old returned in May from six months in Sierra Leone as part of the African Union's Ebola response team, for which he was given the country's Meritorious Service Award.

He acknowledges the danger in which he placed himself but maintains that "every effort to save fellow human lives" is worth the potential pitfalls.

"My risk-taking ventures aren't just for pleasure or fun, but for humanitarian purposes," said the medic, who told AFP he had always wanted to experience weightlessness.

XCOR offers one-hour flights for $95,000 (84,000 euros) on a shuttle that takes off from the Mojave Desert in California. It has already sold hundreds of tickets, although it has yet to start commercial trips.

Its Lynx Mark II spacecraft is capable of carrying a pilot and a passenger over the 100-kilometre (62-mile) limit known as the Karman line -- the border between the atmosphere and outer space.

The Rising Star shortlist will be whittled down to three finalists who will deliver a 15-minute speech on any subject to an audience of 1,300 from 196 countries at the One Young World Summit in Bangkok in November.

A panel of judges will then decide which candidate most deserves the journey of a lifetime and the right to call themselves an astronaut.

Nono Cele, 28, a leading Johannesburg-based sports broadcasting producer and director, is another of the contenders and told AFP the idea of being the first black African in space "gives me goose bumps".

"My background, my country, my struggles and my mistakes have all told me that these things are not possible for a person like me -- black, female and South African," she said.

"So, to even stand a chance at such greatness only validates that passion in me that my life is meaningful. My life is valuable. And most importantly, I can make a difference."

Cele is joined by Tshepo Seloane, 25, from South Africa's northern province of Gauteng, an adviser to the Nelson Mandela Children's Fund and a campaigner on a variety of youth issues.

Quite when any of the hopefuls would actually reach space is subject to the vagaries hi-tech engineering and the timetable for their flights remains as up in the air as they hope to be.

A fourth contender in the race, part-time South African DJ Mandla Maseko, landed a coveted seat in in 2013 to join one of the Lynx Mark II flights.

He was due to fly this year after winning a competition organised by the US-based AXE Apollo Space Academy but no firm plans for his trip have yet been made public.

Although the stated programme for the "Rising Star" winner is to board a flight in 2016, progress had been slower than expected on developing the spacecraft.

Meanwhile XCOR says on its website it only expects to start the Lynx Mark I testing phase -- which will last up to 18 months -- towards the end of 2015.

A representative of Maseko, who calls himself "The Afronaut", told AFP his flight had been rescheduled for "early 2016" while XCOR did not respond to requests for comment.

All four candidates will claim a unique place in history if they are lucky enough to get a place on an XCOR flight, but will be following a trail blazed by Arnaldo Tamayo.

The 73-year-old Cuban was proclaimed the first black person in space when he was launched into orbit aboard the Soyuz 38 on September 18, 1980.

The first African in space was Mark Shuttleworth, 40, a South African entrepreneur who now lives on the Isle of Man, a British Crown dependency, and holds dual citizenship.

He made headlines around the world when he became the second self-funded space tourist aboard Russia's Soyuz TM-34 mission on April 25 2002, paying a reported $20 million for the privilege.

While in space he had a radio conversation with Nelson Mandela and a terminally-ill 14-year-old South African girl who asked him to marry her.

"I'm very honoured by your question," replied Shuttleworth, before changing the subject.