Adapt or die: How arctic animals cope with climate change 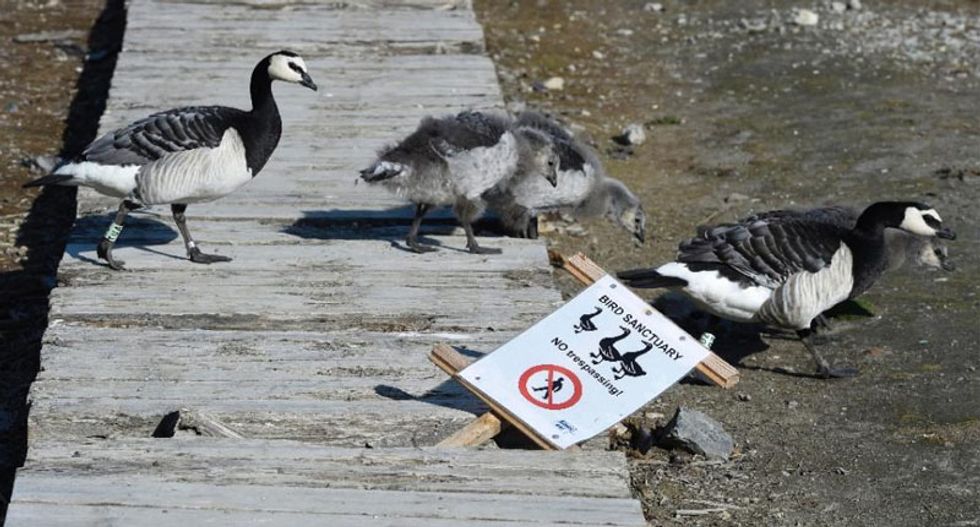 When it comes to coping with climate change in the Arctic region, which is warming at three times the global average, some animals are more equal than others.

Migrating Barnacle geese that fly north to lay eggs amid the Norwegian Arctic's craggy peaks and melting glaciers are adapting very well, thank you, at least for now.

Reindeer, foxes and polar bears, however, are having a harder time of it.

Just finding enough to eat can be a struggle.

The geese -- which leave Scotland each year by the thousands -- have come like clockwork since time immemorial in the Spring to Spitsbergen and other islands in the Svalbard archipelago to nest.

Until, that is, a few years ago.

"In 2007 they suddenly pushed forward their 3,000-kilometre (1,860-mile) trip by two weeks and it's been that way ever since," said Maarten Loonen, a Dutch ornithologist who studies the archipelago.

The revised travel schedule does not seem to pose a problem. Indeed, the number of goslings that hatch each season has more than doubled in two decades, from 15,000 to some 35,000.

But experts caution that the geese may be thriving in spite of climate change, not because of it: their growing numbers, they suspect, are mainly due to strict European conservation laws.

The Arctic has warmed more than any other region on Earth, an amplifying effect linked to sea ice loss and changes in atmospheric and ocean circulation.

In December, 195 nations will gather in Paris with a mandate to forge a planet-saving climate pact. Their goal: prevent average global temperatures from rising more than two degrees Celsius (3.6 degree Fahrenheit) above pre-industrial levels.

On Svalbard, temperatures shot up an average of 2.5 degrees Celsius (4.5 degrees Fahrenheit) over the last century, far exceeding the global increase of 0.8 C since the pre-industrial era.

Other animals have not managed to adapt as well as the geese to these rapid changes.

The freezing rain that often falls now instead of snow, for example, is making it harder for foxes and reindeer in Svalbard to get a meal.

The animals cannot break through the frozen rain to reach their food supplies.

"During winter the foxes sometimes have trouble accessing their stockpiles of gosling cadavers that they buried in reserve," said Loonen.

Svalbard reindeer, which eat lichen and moss, have hoofs designed by evolution to clear the snow off their food supply in winter. But against ice, they are useless.

For now, reindeer, fox and geese populations in the Arctic are all stable, according to the International Union of Nature, which tracks at-risk species.

But scientists are tracking them carefully for signs of trouble.

The travails of polar bears, which no longer have as many floating ocean perches from which to hunt seals, has been well documented.

This shrinking hunting ground may be one reason they have taken to scarfing down the ready supply of goose eggs, a high-protein snack for the lumbering carnivores.

Their new foraging habits have also brought polar bears into closer contact with humans, who they slightly outnumber here.

"Most of the Svalbard bears live in the archipelago's east, but over the past few years they have been exploring new territories and have been coming closer to Ny-Alesund," said Norwegian scientist Sebastian Barrault, referring to a remote settlement that hosts 150 scientists and staff during the Arctic summer.

Thirty years ago, leaving the compound without a gun was not a problem. Today, it's a no-no.

Warmer temperatures have also wrought havoc on the glaciers of Spitsbergen, the archipelago's biggest island.

One of the biggest among them, 30-kilometre (18-mile) long Kronenbreen, is going fast.

"Kronenbreen has shrunk by a kilometre in three years. It's unbelievable," said Heidi Sevestre, a doctoral student studying glaciers at the University Centre in Svalbard.

Marine maps of glacier positions in local fjords are often out of date within a few years of being drawn.

And the pace is picking up. "Changes in the ocean levels are going to arrive faster than they did during [the end of] the last Ice Age," said Florian Tolle, a glaciologist who's been working on Svalbard for a decade.

The UN's climate science panel says melting glaciers will account for a quarter of total sea level rise, which is pegged at 26 to 98 centimetres (10 to 39 inches) by 2100.